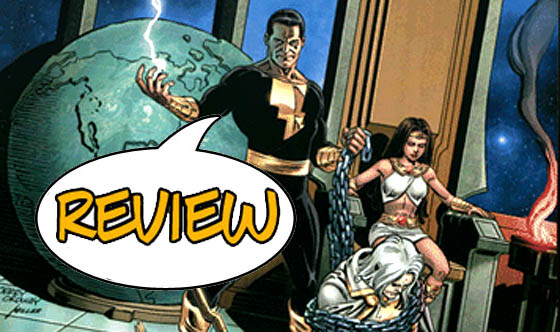 There are those in our Major Spoilers audience who question Black Adam’s use as an anti-hero figure in JSA.Â  It’s a valid criticism, as the man has shown himself repeatedly to be a sadistic, brutal figure, willing to use the powers of Shazam to rip apart anyone who stands in his way.Â  Of course, if he were a Marvel hero, he’d probably fit right in, wouldn’t he?

Something to think about…

Previously, on Justice League of America:Â  Black Adam has finally managed to get the upper hand on his old foe Captain Marvel, invading the Rock of Eternity and stealing his enemy’s power.Â  Leaving Marvel as a powerless fifteen year old, he and his resurrected wife Isis have moved to consolidate their powerbase, even recruiting Billy Batson’s sister Mary Marvel into their evil cabal.Â  Meanwhile, Billy has returned home to Fawcett City, and called in his old friends in the Justice Society (fresh off a giant ongoing blah blah blah with Gog, Magog, and the Kingdom Come Superman) to assit him in his hour of need.Â  Years ago, Captain Marvel was forced to leave the JSA, partly because the elder members didn’t approve of his closeness to Stargirl, herself older than him, even though the outer shell of his Captain Marvel identity belied that status.Â  Wth Atom-Smasher returning to duty to help take out Black Adam, the team heads into the subway tunnels to find their way back to the Rock of Eternity.

Thanks to the magics of Jakeem Thunder (who also hasn’t been in this book much lately, edged out by an endless stream of Kingdom Come-derived legacy heroes) the team finds their way to Platform 9 3/4 the train station that originally led Billy to the wizard Shazam.Â  Billy tells the tema the story of how Theo Adam murdered his parents back in the original “Power of Shazam” graphic novel, and how the evil of Black Adam destroyed his family long before he corrupted Mary.Â  As the tale is being told, Isis and Black Adam discuss their new role in the world, and she explains that her mercy, her restraing are gone.Â  Now, she has a new goal, intending to create a new family, “a family who will destroy the modern world and all the sins is festers with!”Â Â  Wait, Isis joined the John Birch Society?Â

The Justice Society confronts Adam and Isis, and while the Black Marvel fights the JSA, Isis snatches Billy Batson, flinging him off the rock into the timestream.Â  Jay Garrick manages to save Billy’s life, but before he could use his super-speed to save himself, Jay is pulled away into the timestream.Â  Stargirl gets Billy away from the battle, and they have a little moment that almost leads to the kiss they both wished that they had shared in their previous tenure, but Mary Marvel (in full pink-haired Final Crisis disco bondage mode)Â  interrupts.Â  Stargirl engages her in combat, dragging Billy away to make him a corrupt evil Marvel as well, while Jay Garrick is confronted by a ghostly form in the timestream.Â  “I’m Billy Batson’s father.Â  If we are to save my children, you need to come with me, quickly…Â  to the Rock of Finality.”Â  The backup ‘Origins and Omen’ story shows the generation gap that the team has suffered through, as the founding JSAers (including Ma Hunkle, the original Red Tornado) talk about where the team has been, where it is going, recruit MORE new members (!!!) and evil Guardian of the Universe Scar foretells dark and foreboding things in their future.Â

I’m still on the fence about this arc, feeling as it does like a book lost in time.Â  The team’s lineup harkens back to the previous JSA iteration, with Jakeem and Atom-Smasher, while large portions of the plot are a sequel to Jerry Ordway’s ‘Power of Shazam’ series that ended nearly a decade ago.Â  Still, it’s good to see Ordway’s pencils again (though his wicked Mary is just disturbing as hell) and the story manages to convey a sense of urgency, as well as giving us more insight into the transition of Isis from gentle fertility goddess to vengeful harpy in the sky.Â  Taken just on it’s own merits, though, it’s a well-done issue, with story and art complimenting one another, and a nice balance of characters (including a focus on my fave-rave Jay Garrick.)Â  Justice Society of America #24 earns 3.5 out of 5 stars, with the hope that Jerry Ordway can, once and for all, bring Mary Marvel back from Cuckootown.