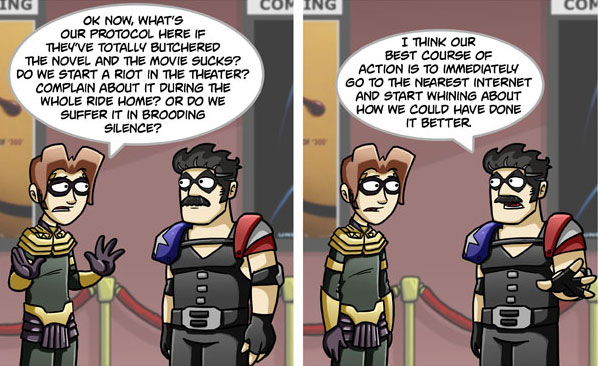 Perhaps you’ve heard of this highly hyped Watchmen movie that opens today. Perhaps you were one of the fortunate masses, who stood in line for hours, only to wide up sitting next to that big sweaty smelly guy, who ended up dripping nacho cheese on your arm, but on the plus side offered you some of his Junior Mints, but you got to see the film before anyone else (although that other big sweaty smelly guy in front of you was blocking half the screen). Perhaps you were the big sweaty smelly guy who was annoyed by that person sitting behind you, who constantly complained about the smell, and the nacho cheese sauce that has ruined his cardigan.Â  Or perhaps you were the nacho cheese, and the only thing going through your head was, “Oh no, not again.”Â  In any case, here’s your chance to talk about the film; what worked, what didn’t, and why you are (or aren’t) going to see it again.Â  Oh, and feel free to be all spoilery, ’cause if you haven’t figured it out yet, that’s the name of the site Russell.