Written by acclaimed DC writer Mark Sable, best known for his TWO-FACE: YEAR ONE and CYBORG, UNTHINKABLE is a five-issue mini-series that debuts this May. The series features covers by Paul (PUNISHER NOIR) Azaceta and Kristian (DMZ) Donaldson, with interior art by THE REMNANT’s rising-star artist Julian Totino Tedesco.

“Mark Sable is one of the best of the new generation of comics writers. Fans are going to love the smart, action-packed work that he and Julian Totino Tedesco are doing on UNTHINKABLE,” said BOOM!’s E-i-C Mark Waid. “At BOOM!, we believe in this project so much that we wanted to really do something to make sure people took notice. This contest not only allows fans to become part of the story, but it also enhances and extends UNTHINKABLE beyond the pages of the comic. And hey, winning a signed one-of-a-kind collector’s edition isn’t bad, either!”

So while fans will have to wait until May for the first issue of UNTHINKABLE to premiere, comic fans everywhere can start experiencing the UNTHINKABLE story NOW by participating in comic’s first Altered Reality Game (ARG) at www.wolfpackpmc.com. Once fans join the Wolfpack Private Military Company (PMC) at www.wolfpackpmc.com, they will be tasked with a series of missions that will inform and enhance the story of UNTHINKABLE. The contestant who enters the most winning answers at the end of the three missions will win a unique hardcover of the first issue signed by series creator Mark Sable and BOOM! E-i-C Mark Waid. 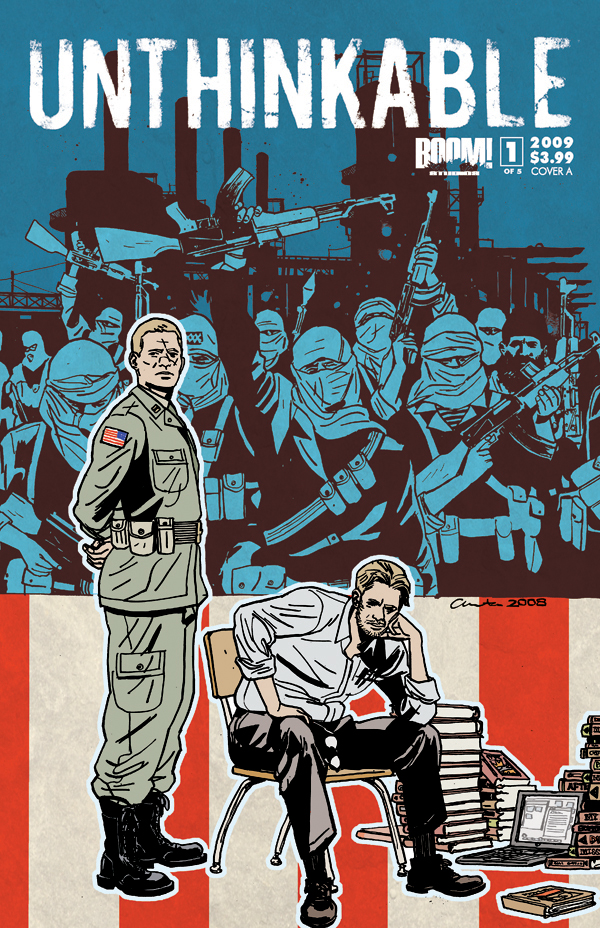 Fans have until March 8th to sign up for the UNTHINKABLE Altered Reality Game. Missions will start March 9th, and run until the end of the month when a winner will be announced.

Comic fans everywhere can help Alan by joining The Wolfpack PMC today. As part of The Wolfpack PMC (www.wolfpackpmc.com), fans will be dropped into the UNTHINKABLE storyline and required to find other members of the think tank to prevent the UNTHINKABLE from happening. But are the players helping to end the terror or enabling it? Players will have to decide for themselves.

Wikipedia defines an alternate or Altered Reality Game (ARG) as, “an interactive narrative… (where) Players interact directly with characters in the game, solve plot-based challenges and puzzles, and often work together with a community to analyze the story and coordinate real-life and online activities. ARGs generally use multimedia, such as telephones, email and mail but rely on the Internet as the central binding medium.”

Coming on the heels of such ARGs as THE LOST EXPERIENCE for the TV show LOST and I LOVE BEES for the HALO 2 launch, the UNTHINKABLE ARG will turn the computing power of everyday comic fans into valuable skills as they find information essential to the UNTHINKABLE storyline making the UNTHINKABLE ARG a first in comic book marketing.

“Each comic deserves its own unique marketing campaign. UNTHINKABLE just screamed ARG to us,” said BOOM! Studios Marketing and Sales Director Chip Mosher. “BOOM! has a reputation for having some of the most aggressive comics marketing in the business, and we are always looking to top ourselves. Working with Sable on this ARG has been a blast, and it’s always great to do something where you are breaking new ground. The UNTHINKABLE ARG is a first-of-its-kind in comics and it will just be so awesome for the fans to participate in the story in ways that were just – dare I say – unthinkable a decade before.”

“As excited as I am about the comic, I’m just as excited by the ARG,” says series creator Mark Sable, a huge gamer himself. “I see the game as a way for fans to ‘earn’ a wealth of bonus material instead of paying for it, and a great way to bring interactivity to comics. The game is called an ARG for a reason–it brings home how frighteningly close UNTHINKABLE is to reality.”

UNTHINKABLE #1 is written by Mark Sable and drawn by Julian Totino Tedesco with first issue covers by Paul Azaceta and Kristian Donaldson. The first issue of UNTHINKABLE ships in May and has a Diamond Code of MAR094127.