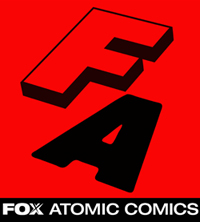 If Boom! Studios was the company to watch in 2008, then the company is the one to cause the bigger companies to quake in 2009 as the company continues to make major announcements left and right.Â  The latest has Fox Atomic, a division of 20th Century Fox, teaming up with Boom! for a Fox Atomic Comics imprint under the Boom! banner.

Check out the entire press release for the full details.

BOOM! Studios announced today that Fox Atomic, a division of 20th Century Fox, has entered into a broad multi-title comic book and graphic novel co-publishing deal that will see the formation of a Fox Atomic Comics imprint at BOOM!.

Titles will cover a vast array of different titles and characters, some very familiar to fans, others being new turns on old favorites, as well as entirely new, original series.

Fox Atomic first made a splash with a series of SpikeTV Award-winning original graphic novels in 2007 including 28 DAYS LATER: THE AFTERMATH, featuring work from 30 DAYS OF NIGHT creator Steve Niles, followed by THE HILLS HAVE EYES: THE BEGINNING written by Jimmy Palmiotti and Justin Gray. A third graphic novel, the International Horror Guild Award-winning THE NIGHTMARE FACTORY was also released, adapting stories from Bram Stoker and World Fantasy Award-winner Thomas Ligotti. THE NIGHTMARE FACTORY: VOLUME TWO, the second graphic novel in the series, followed in 2008.

The new venture will see a broad expansion of Fox Atomic’s titles after its previous success. Partners are keeping the specific details of the series under wraps with expectations for further announcements later in the convention season featuring marquee series and high-profile creators.