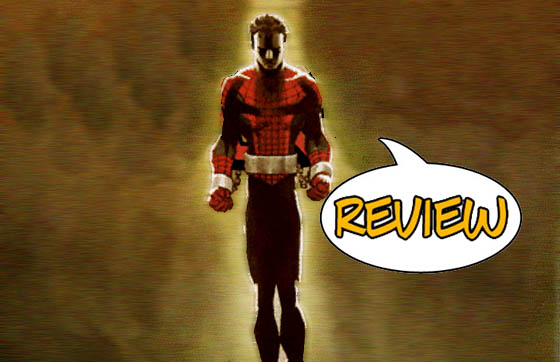 Ever since consulting with his Demonic Attorny, Peter Parker has found himself in a Dystopia, running and enless Dance of the Dead against foes new, old, personal and private.Â  Even though he’s tried not to Dwell on the Past, the Duplicity of a new friend has left Spider-Man on a Downhill Charge to Disaster.Â  The presence of a killer using his Spider-tracers to Despoil his reputation has served to furtherÂ Demoralize, Demystyfy, and Daze our Defiant Vanguard, leaving him in Defense Formation, only to have the NYPD score the Death Stroke, hitting the spectacular one while he’s down.Â  How’s will our Daunting Defender get outta this one?

Previously, on Amazing Spider-Man:Â  Spidey has been running non-stop, as though his life were suddenly controlled by half-a-dozen different people and he was forced to do everything four times as oftenÂ to please an invisible horde of observers who laugh at his misfortunes…Â  Hmm.Â  With the election for mayor of New York upon us, both candidates have been looking for the coup de tat that will win them the whole shebang, when new supervillain Menace arrived to attack a rally.Â  Barely beaten by Menace’s trickery, Spider-Man is weak enough to be takin into custody by the NYPDÂ , while Menace returns home and (unbeknownst to all but we, the omnipotent readers) reveals himself to be… HARRY OSBORN’S GIRLFRIEND?Â  That’s a pretty big reveal, there, proving that anyone who sleeps with an Osborn is probably already nuts.Â  So, Â with Pete in jail, looks like this title is over, right?Â  Tune in next week for “The Amazing Betty Brant.”

We open with another episodeof “Two-In-One,” a news program that, amazingly, recaps all our storylines quickly and efficiently.Â  Kudos to the Spider-team for coming up with an original way to get all of the exposition out of the way.Â  The team recaps Spider-Man’s arrest, and goes to their commentation, J. Jonah Jameson in the field.Â  In a hilarious bit, Jonah doesn’t respond at all, instead humming happily to himself, too pleased to even speak.Â  At the same time as Spidey is being takien into custody, his roomate Vin (an officer of the NYPD) confronts Carlie (Pete’s ostensible romantic interest) about his part in the Spider-tracer killings.Â  Vin reveals the truth: There IS NO Spider-tracer killer, only cops planting the bugs at the scene of unrelated murders.Â  “Spider-Man’s a lawbreaker, Carlie,” he explains.Â  “He’s a vigilante whose methods interfere with ours.Â  So, we decided to do something about it.”Â  Carlie is horrified, but pretends to join in the conspiracy while, at the same time, their boss prepares to unmask Spider-Man.Â  “GET YOUR HANDS OFF MY CLIENT,” commands a voice from the door, heralding the miraculous arrival of Matthew Murdock, attorney at law.Â  Murdock tells Sergeant Palone that the mask stays on until the court says otherwise, and Palone asks if he’s kidding.Â  “I’m a blind lawyer with a history of incarceration and personal tragedy.Â  What in that maek-up makes you think I have a sense of humor?”Â  Heh…

Murdock convinces Spider-Man not to bust out, while Carlie visits the Sarge with the evidence of the tracer conspiracy.Â  The arraignment (rushed through by the Mayor, desperate for the publicity boost) goes through, and the court allows Peter to keep his mask, but unfortunately, Sergeant Palone is in on the conspiracy and orders Vin and Carlie arrested as scapegoats.Â  Vin’s partner explains that not ALL the murders were unrelated, and Vin is arrested himself.Â  Back in the prison, Spider-Man sees his roommate being booked (having obviously taken a hell of a beating from his fellow cops) and asks Daredevil/Murdock for a favor.Â  Murdock gets him sent to Gen Pop, casts doubt on the case by having Iron Fist show up in a Spider-Man costume and even gives him a little present.Â  Someone, it seemed, broke into the evidence locker and stole Spider-Man’s webshooters the night before.Â  “On an unrelated point,” Matt finishes, “The Black Cat sends her regards.”Â  Spidey, armed with his webshooters again is just in time to save Vin from a prison riot, while at the same time, Norman Osborn realizes that somebody has broken into the hidden stash of Green Goblin weapons he keeps.Â  Norm realizes that it’s NOT son Harry as he suspected, but even he doesn’t realize that Harry’s girlfriend Lily (daughter of one of the Mayoral candidates) has been masquerading as the masked Menace.Â  The issue ends with Spider-Man face to face with an angry prison mob, trying to save the life of a man who was willing to frame him for murder…Â  Standard Parker luck.

This is a really good issue, with great dialogue, a stellar art job from John Romita, Jr and more subtlety and plot ins and outs than I thought Mark Guggenheim capable of.Â  The story as a whole is suspenseful and nicely done, and the cameos by Iron Fist and Daredevil nicely handled.Â  It’s nice to see some of the ongoing plot points starting to wrap up, even though I am unhappy with the revelation that most of the cops featured in the book are corrupt.Â  Overall, it’s a very strong issue, with the only weakness being the fact that the weekly frequency makes it really hard to keep up with all the various developments in Peter Parker’s life.Â  Amazing Spider-Man #587 earns a very impressive 4.5 out of 5 stars, and I’m looking forward to how this whole thing wraps up this week…