Erik Larsen continues his love for President Barack Obama by offering up an exclusive WonderCon cover to Savage Dragon #145. 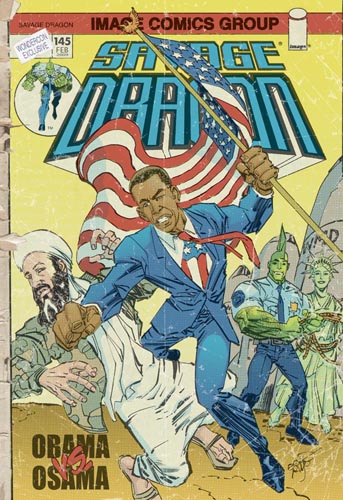 “I had no idea what I was getting into, but the moment I finished the cover I told myself: ‘Erik, you just created the greatest comic book cover of all time’ and it turns out I was totally right,” Erik Larsen said in a prepared statement. “Lets face it, President Barack Obama punching out Osama Bin Laden with a huge American flag in one hand while Savage Dragon frees Lady Liberty from a Weapon of Mass Destruction is as good as it’s ever going to get.”

Despite Larsen’s humble nature, the WonderCon variant will no doubt be the greatest comic book cover ever printed, due in no short order to our nation’s 44th President kicking the ass of his greatest nemesis. The cover’s status is augmented by the fact a very limited run of 1000 will be made available and never reprinted. Fans wishing to purchase a copy can only do so by attending San Francisco’s WonderCon.

The variant can only be found at the Image Comics booth at WonderCon this weekend — and then presumably on eBay Monday morning for $500.