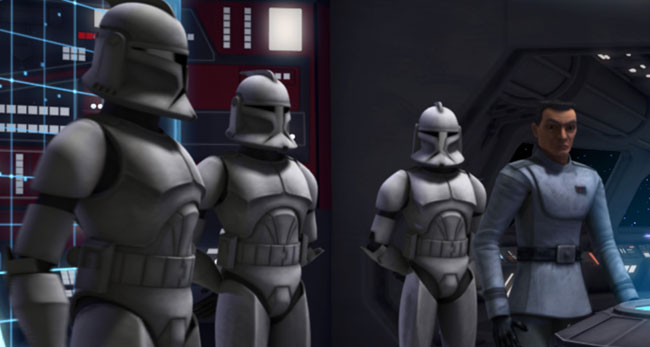 The first of an epic, three part story arc, â€œStorm Over Rylothâ€ begins an in-depth look at the emotional tolls of the galactic conflict, as well as the price of failure when lives hang in the balance. The all-new episode of the hit animated series STAR WARS: THE CLONE WARS premieres at 9 p.m. ET/PT Friday, February 27, on Cartoon Network.

In the episode, the heroes of the Republic begin their campaign to free the planet Ryloth from the oppressive occupation of enemy forces. In an effort to break through the orbiting Separatist defenses, however, Ahsoka must learn a hard-hitting lesson after she disobeys Anakinâ€™s orders â€“ and loses most of her squadron as a result.

Director Brian Kalin Oâ€™Connell and writer George Krstic welcomed the opportunity to explore some of the less heroic aspects of the conflict, particularly examining the responsibility of the Jedi in light of the consequences of their actions.

â€œItâ€™s easy to make the Jedi into superheroes, but showing their vulnerability really makes them far more interesting and believable,â€ Oâ€™Connell says. â€œYou have this Padawan in the footsteps of the Chosen One. And she fails â€“ badly. Clones die, and thatâ€™s horrible â€“ and we really get to feel that weight. But we also get to see how Anakin rebuilds Ahsokaâ€™s confidence, and how she comes back and rises to the challenge.â€

Click for super-sized image.
Krstic agrees, adding that the episode offered an opportunity to infuse the Sagaâ€™s classic space opera elements with a new emotional weight.

â€œThis is a very epic episode â€“ itâ€™s grand and operatic ala the old days of the original Star Wars,â€ he says. â€œThere are so many wonderful aspects to this episode because Ahsoka must deal with real life and death situations, and the result isnâ€™t good. She gets her first experience dealing with the burden of command, and finds out that it isnâ€™t all heroics. It really is a burden.â€

As the beginning of a three-part story arc, â€œStorm Over Rylothâ€ expands the scope of the Clone Wars to illustrate both the far-reaching and intimate effects of the war. Tackling ambiguities and exploring emotional motivations and consequences, this episode sets the stage for â€œInnocents of Rylothâ€ and â€œLiberty of Ryloth,â€ the continuation and conclusion of the thrilling Ryloth saga.

Attached is a new image from â€œStorm Over Ryloth,â€ an all-new episode of STAR WARS: THE CLONE WARS.