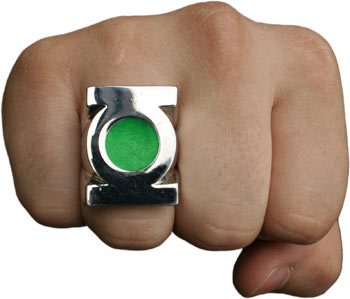 Well there’s no stopping the movie machine now.Â  Warner Bros has announced release dates for its Green Lantern and Jonah Hex movies.Â  Green Lantern is expected to arrive in theaters on December 17, 2010, just in time for the holiday season.Â  WB made the wise decision ot move the date toward the end of the year, as the summer mega movie season is already packed with Iron Man 2, Thor, and The Green Hornet (providing Gondry gets nailed down as director) .

What competition will GL face in its opening weekend?Â  Smurfs from Sony.Â  That’s going to be a tough sell as the little kids will want to see the fun loving three-apple tall imps, while adults will want to venture into superhero fare.Â  Oddly enough, it’s movies like the Smurfs that do incredibly well during the holidays, so there should be some concern that Green Lantern may not take the top spot in the box office.

If Warner Bros. is going to release Green Lantern during the Christmas holiday, that is probably the best date to do it, as Christmas day sees the release of Robert Downey Jr.’s Sherlock Holmes, the Alvin and the Chipmunks sequel, Disney’s Princess and the Frog, and Fox’s Tooth Fairy.

Since mum is the word on who is playing Green Lantern, who do you want to see weilding one of the most powerful weapson in the universe?Â  And will WB go the Thor route and find someone that is in their mid-twenties?