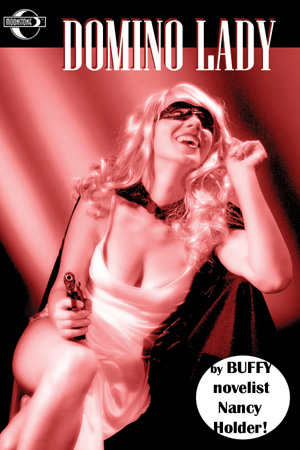 32pgs, color, $3.99
Mature readers
The debut of Moonstoneâ€™s hot noir-crime thriller!
Buffy novelist and four time Bram Stoker Award winner Nancy Holder uncovers the sexy romp secrets of our stunning Blond Bombshell in this new on-going series! The Domino Lady does whatever it takes, and uses whatever is at her disposal, to outthink and outplay those who prey upon the innocent. Sleeping with the enemy makes no difference with her, as long as she can put away the bad guys. No man can resist her, for she strikes without warning and she holds all the cards. (2 covers, ratio = 1 Lmt Ed photo cover for every 3 Jarling covers)

Moonstone is proud to present More Tales of Zorro, the second anthology featuring all-new, original tales of The Fox!Â  This groundbreaking compilation includes never-before-seen stories and essays from a fantastic lineup of todayâ€™s top writers including:

With the International success of the recent Telemundo television series Zorro: The Sword and the Rose, as well as the blockbuster films starring Antonio Banderas, the New York Times bestselling Zorro: A Novel by Isabel Allende, the Young Zorro novels by Jan Adkins, and the first Zorro anthology, Tales of Zorro, The Fox continues to be one of the most popular and enduring heroes of the twentieth-century.Â  For more than eight-seven years Zorro has entertained and thrilled audiences around the world.