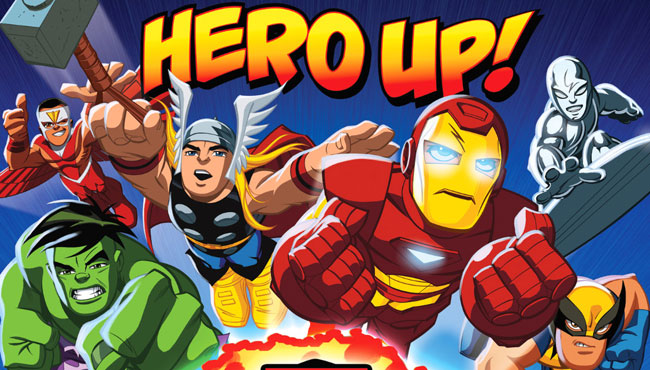 We wrote about the upcoming Marvel Superhero Squad animated series a few days ago, and now we’ve dug up the official press release that gives more information about the 26 episode season.

Is it any surprise Wolverine is in it?

When the greatest heroes on the planet unite to face the worldâ€™s greatest villains, you get the biggest, most family-friendly Super Hero team-up in TV historyâ€¦ Super Hero Squad. Itâ€™s no small job protecting Super Hero City from VillainVilleâ€™s infamous criminalsâ€¦ but Iron Man, Wolverine, the Hulk, the Silver Surfer, Thor and the Falcon are always up for the job.

Shouting â€œHero Up!â€ as they rush into battle, the Squad must keep Dr. Doomâ€™s allies from gathering pieces of the Infinity Sword. Otherwise, Doom will use the Sword to rule the universe! Luckily, the City is filled with Marvel Super Hero guest-stars to help out in a pinch. These brave heroes totally deliver the action â€“ but with plenty of humor on the side.

Marvel has attracted some superstar talent to play the roles of the dynamic heroes and villans of Marvel Super Hero Squad including: Tom Kenny (Spongebob), Charlie Adler (Transformers 1 & 2), Steve Blum (Wolverine and the X-Men, Hulk Vs.) and Grey DeLisle (Fairly Oddparents and The Replacements).

Eric Rollman, Marvelâ€™s President of Animation commented; â€œWe are thrilled to have Cartoon Network as the U.S home for the show and appreciate the hard work everyone at the network have put into making this deal come to fruition. Marvel Super Hero Squad represents many firsts for Marvel in that itâ€™s our first Marvel Universe show inclusive of characters from across the many worlds of Marvel and our first action series with a humorous twist. The commitment both Marvel and Cartoon Network have made to this show should establish it as an evergreen fixture for both companies for many years to come.â€

Hasbro, the worldâ€™s leader in action figures, is the Master Licensee for Marvel Super Hero Squad toys which have already seen success at retail.

About Marvel Entertainment
Marvel Entertainment, Inc. is one of the world’s most prominent character-based entertainment companies, built on a proven library of over 5,000 characters featured in a variety of media over seventy years.Â  Marvel utilizes its character franchises in licensing, entertainment (via Marvel Studios and Marvel Animation) and publishing (via Marvel Comics).Â  Marvel’s strategy is to leverage its franchises in a growing array of opportunities around the world, including feature films, consumer products, toys, video games, animated television, direct-to-DVD and online.Â  For more information visit www.marvel.com.