When you cancel a series, it is always good to go out with a bang, and Robin #183 goes out in a way that makes the reader realize Tim Drake Wayne is more of a hero mastermind than Superman, Batman, and Wonder Woman combined. Robin #183 is the last installment of the current series, and delivers a story that might just be the best single issue of 2009.
DC

By Stephen Schleicher on February 20, 2009 7 Comments
When you cancel a series, it is always good to go out with a bang, and Robin #183 goes out in a way that makes the reader realize Tim Drake Wayne is more of a hero mastermind than Superman, Batman, and Wonder Woman combined. Robin #183 is the last installment of the current series, and delivers a story that might just be the best single issue of 2009.

Not with a BANG, but a KRAK-A-DOOOOOOM!

When you cancel a series, it is always good to go out with a bang, and Robin #183 goes out in a way that makes the reader realize Tim Drake Wayne is more of a hero mastermind than Superman, Batman, and Wonder Woman combined.Â  Robin #183 is the last installment of the current series, and delivers a story that might just be the best single issue of 2009.

Lady Shiva is back, and ready to teach Tim a lesson in being an upstart kid, who thinks he knows everything. Tim knows Robin is going to die at dawn (a great homage to both Batman #156 and Batman #674), but spends the night fighting crime and tying up loose ends.

You want an even better homage?Â  Check out the cover to the first Robin series from 1991, and then compare it to this issue.Â  Priceless.Â  Not only that, the first issue, ties right in to this closing story.Â  Iâ€™ve always been fascinated with what Joss Whedon did with Buffy the Vampire Slayer universe, bringing back plot threads and characters from seasons past and making them relevant to the current story being told. 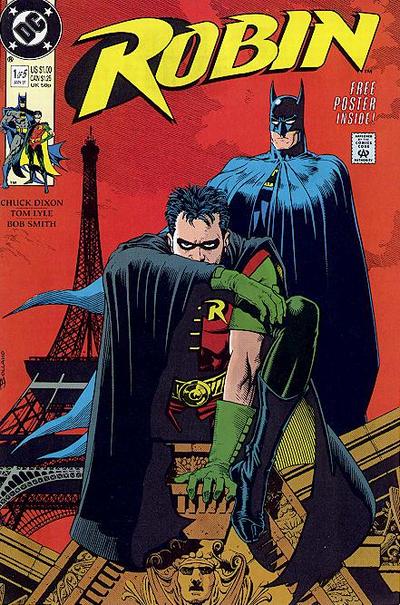 Fabian Nicieza does the same thing here, as we get a glimpse of some of the major plot points in Robinâ€™s history.Â  Readers get to see how he deals with Zoanne, tries to confront Stephanie, chats it up with his longest living friend, and even deals with Jason Todd one (last?) more time.Â  I also dig seeing some of the more recent characters (Detective Harper and Jason Bard) making an appearance, while old foes Anarky and The General also get a cameo.

DC Universe: Last Will and Testament featured the DCU characters dealing with what might be the final night of their lives.Â  Robin #183 blows that issue out of the water.Â  One really gets the sense that this really could be the end of Tim Drake Wayne.Â  But superheroes being superheroes, the good guy always wins in the end.Â  And Tim does pulls it off like a master.

What Tim Wayne proves in this issue is he is better than those that came before him — maybe even better than Batman.Â  While Dick has his own experiences and has become a hero in his own right, the way Robin brings Lady Shiva down is perfect; one of those swerves you didnâ€™t see coming until the big reveal, but once made, shows how well Fabian Nicieza understands this character.

Who do I want to see as Batmanâ€™s replacement?Â  Tim Wayne has the chops, the skills, the detachment, and the network to make it happen.Â  Itâ€™s just too bad everyone around him always dies.Â  Perhaps following Battle for the Cowl, heâ€™ll have at least some happiness as he moves into the next stage of his life — whatever that may be.Â  If he dons the cowl, he wonâ€™t be in it for long, and if he takes the last train to Clarksville, it will be a terrible waste of a character.

Freddie Williams II delivers up another hit with his art, although there is one minor flaw.Â  During the Jason Todd/Tim Wayne confrontation, Williams II draws Jason and Tim in a very similar fashion.Â  In one key panel, Guy Major colors Timâ€™s mask the same red color as Jasonâ€™s so there is a moments confusion while the the reader tries to figure it all out.Â  Itâ€™s is a minor issue, and shouldnâ€™t take away from a most awesome issue.

Iâ€™ve followed Tim Drakeâ€™s adventures since he first discovered Bruce Wayneâ€™s secret. I followed him as he struggled with the death of his mother, then his father, and many of his close friends.Â  Iâ€™ve seen Tim grow into the Robin character over the last 20 years, and of all the Robins, he seems to be the one that best fills the unitard.Â  Dick Grayson made the move from pixie boots and speedos to Nightwing in a way that made sense for the character as he tried to move out from the shadow of his mentor.Â  For what itâ€™s worth, Tim grew into his own hero without needing to take on a different persona.Â Â  Tim Drake Wayne is Robin, and itâ€™s sad to see a series like this come to an end.Â  Iâ€™m looking forward to what comes next for Tim, and am giving Robin #183 6 out of 5 Stars.

Because I can, thatâ€™s why.