Or – “The End Of Our Elaborate Plans, The End…” 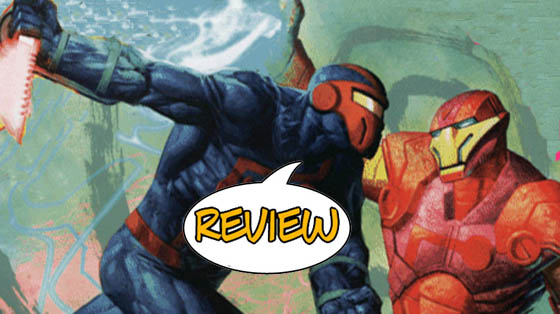 I have always loved the New Warriors.Â  Weellll, scratch that.Â  I hate the DeFalco-written issues of Thor that introduced the team, with Firestar as angelic handler of a rabid Night Thrasher, and that horrifically stiff Ron Frenz “freeze-frame” pose at the end, like an episode of Starsky and Hutch.Â  After that, I mean, I loved the New Warriors, and some of their best stuff came during time-travel epics.Â  Though I dropped this iteration of the title several months ago, in the doldrums of a porrly written and drawn fight with The Machinesmith, Ive come back onboard to watch it go off the end of the pier, another seemingly permananent end for the NW franchise.Â  (They’ll be back in 2010, don’t worry…)

Previously, on New Warriors:Â  The newest team of Warriors has come out and played with

Iron Man, in defiance of the Superhuman Registration Act.Â  Former mutants all, (with the exception of their leader, the mysterious Night Thrasher) they’ve ransacked the technological wizardry of the Marvel Universe to give themselves super-powers, sort of like vintage clothing, only with web-shooters and Stilt-Man pants.Â  The team members were troubled by the actions of Night Thrasher, who refused to reveal to them his identity, making them think he was Dwayne Taylor, the original Thrash.Â  Instead, he is half-brother Donyell, the artist formerly known as Bandit, and upon revealing his identity, Donyell had another hare-brained scheme: go back intime to save his brother.Â  The machine malfunctioned, and threw them into an undisclosed alternate future, where Iron Man had taken over the world, and only Night Thrasher could fight against him.Â  Of course, the kicker came when Night Thrasher was revealed to be Anthony Stark, and Iron Man to be…Â  DWAYNE TAYLOR!Â  Can they fight their way back to Coney Island before the cops get Ajax?

The story opens with the Warriors locked up in prison, with Night Thrasher having turned against them and sided with Dwayne.Â  Apparently, two of their number (Skybolt, formerly Redneck from Grant Morrison’s X-Men run, and Ripcord, formerly Stacy X, from Joe Casey’s X-Men run, a sentence which illuminates a lot of the problem with this book, actually) have been killed in the far-flung future, and the remaining member are despondent about their chances of ever getting home.Â  With their weapons gone, Blackwing remarks, they have no way of escaping.Â  “You should’ve never been dependent on that junk in the first place,” snarls his wife Tempest (they’re really Beak and the second Angel, also from Morrison issues of X-Men) and he responds, “You’re right.Â  We should’ve fallen back on our Jedi Training instead.”Â  Heh…Â  Night Thrasher arives, explaineing how he’s turned on them, and that they’re going to be sent to the Nth Dimension, where the rest of the Marvel heroes ended up.Â

We cut to Iron Man, torturing Tony Stark, and the sight of a fiftyish Tony in his underwear being whipped is mroe than a little bit disturbing for all the wrong reasons.Â  Dwayne Taylor shows himself to be both a sadist, and a psychopathic dictator, having turnedthe ideas of the Initiative into what I always suspected it would turn into: a police state.Â  He kills Stark, and his brother Donyell is horrified to see what big bro has become.Â  It occurs to me that I’ve entirely missed the explanation of how Dwayne survived Stamford, but I’m not sure I care.Â  Dwayne breaks out his partners, they all suit up and head for the time machine, intent on heading home and making sure this dystopian future never happens.Â  Iron Man, Future Version, shows up, and Thrash distracts him one on one so the Warriors can escape.Â  Instead of heading straight for the time machine, though, they warm up the Nth Dimensional generator.Â  Whicl Night Thrasher fights his brother to the death (and Detective Sykes sacrifices herself to save Thrash, ending her character arc) the Warriors return the heroes to the real worldse, , and leap into the time portal.Â  Of course, the Nth Dimension was supposed to be an inhospitable wasteland, so I don’t understand why the heroes all look young and freshly pressed.Â  Once back in their own time, the team breaks up.Â  “What I wanted was to make a difference.Â  But I realize my selfishness HINDERED us,” expositions Night Thrasher.Â  “The lack of trust you had in me can never really be repaired.”Â  The issue ends with Night Thrasher paraphrasing Martin Luther King, and explaining how he had a dream called the New Warriors, and how it didn’t quite come to fruition.Â  “Maybe, one day, I’ll dream again.”Â

If you read the solicits, one day is coming soon, as apparently he’sÂ about to hookÂ up with Justice and his New New Warriors, but…Â  whatever.Â  This issue works better for me than any previous issue of this series, actually, which makes me sad that they saved up the good stuff for the end.Â  Then again, this particular story with it’s finality, it’s dark tone, and downbeat ending, wouldn’t have been the same in the context of an ongoing series.Â  Night Thrasher finally became the kind of hero that he will need to be, presuming he sticks around, and the team realized that they just weren’t cut out for this kind of crusade.Â  Add to that the fact that the Initiative is no longer in power in the Marvel Universe, and they book kinda had to end, didn’t it?Â  Therein lies the rub.Â  The concept of this book (rebels against a world gone wrong) only works while the Status Quo it’s rebelling against works.Â  Since The Initiative was an inherently limited concept, this was, essentialy, doomed to be a limited series.Â  Still,Â  this issue finally showed what the characters (and writer Kevin Grevioux) were capable of, and I actually enjoyed it quite a bit.Â  New Warriors #20 is a fitting swan song for this version of the team, and earns 3.5 out of 5 stars.Â  Reboot in 3..Â  2..Â  1!