Or – “Occasionally, Marvel Does Something Very, Very Right…” 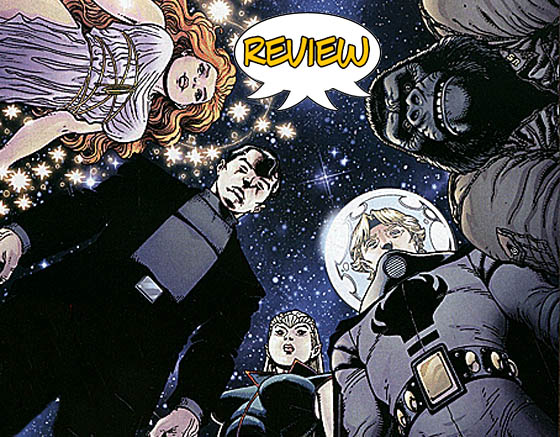 Years ago, when I started reading comics, there were a few elusive issues that I sought out endlessly, but had trouble finding.Â  Hulk #161.Â  Marvel Spotlight #5.Â  Power Man #1.Â  But one of the hardest to find was What If #9, the first appearance of “The Avengers of the 1950’s.”Â  It was an odd little tale, with pre-Stan and Jack heroes Marvel Boy, Venus, Namora, the 3-D Man, Gorilla Man and the Human Robot joining forces against…Â  I dunno, CommunistÂ Alien Tranvestite RobotsÂ or something.Â  These characters were reunited in Avengers Forever some years ago, and wereÂ again reunitedÂ to once and for all end the threat of the Yellow Claw to the Marvel Universe once and for all.Â  Our assemblage of characters (minus the 3-D Man, who wasn’t actually one of Atlas Comics 1950’s heroes, but a ’70’s retcon) has returned to action in a post-Dark Reign world, and their place in that landscape is… NOT what you might expect.

Previously, on Agents of Atlas:Â  The Yellow Claw menaced the world for decades,Â Â menacing

the Avengers, Nick Fury, Captain America, and others.Â  But one of his most implacable foes was Jimmy Woo, agent of SHIELD, who stopped his schemes year after year, until it became clear that Jimmy wouldn’t outlast his immortal opponent.Â  With the help of Grorilla Man, Jimmy left SHIELD behind, regathered his old partners, (including rebuilding the Human Robot, and resurrecting Naomra from the dead)Â regained his youth, and found that his old foe wasn’t trying to defeat him, but instead grooming Jimmy to be the Claw’s replacement as the successor to the legendary Khans of history.Â  Now in control of the Atlas Foundation (the Claw’s huge criminal organization) and accompanied by his fellow 50’s survivors, Jimmy has fully embraced the role of “Golden Emperor” and intends to make the world a better place by posing as a super-villain himself.Â  Norman Osborn needs to watch his back…

Â The issue starts with Gorilla Man’s continuity catch up of the last few years of Marvel (“‘Sup.Â  So, House of M got rid of mutants, Civil War got rid of Captain America, World War Hulk got rid of Hulk (kind of) Secret Invasion got rid of the Wasp, and Dark Reign got rid of people liking Iron Man.Â  You’ll figure out who we are in a second.”Â  Heh…)Â  We open with former Spider-Man/Luke Cage punching bag Man-Mountain Marko, now an agent of the ATF, busting into an Atlas facility and announces that he’s a federal agent.Â  Boy, you put the Green Goblin in charge, and all sorts of low-brow types become Feds, don’t they?Â  A nameless turncoat who used to work for the Atlas foundation has brought them here in the hopes of stopping the team’s recent rampages, but the operation is quickly put down by the combat wing of the Agents of Atlas (Namora, The Human Robot and Gorilla-Man) who take the entire task force out with alacrity.Â  Marko tries to give them a message from Osborn, but Gorilla-Man isn’t interested.Â  “Tell him Master Woo doesn’t deal with low level stooges.”Â  Norman’s response comes in the form of a cruise missile, destroying the entire facility.

Back at Avengers Tower, Norman throws a huge hissy-fit about the loss ofÂ Fort Knox’s gold supply (stolen by the Agents in the Dark Reign preview issue) when a strange woman walks right past his security forces.Â  Norm calls in the Sentry to handle his dirty work, but the woman easily charms him, using Sentry to break into Norman’s private office.Â  Osborn greets her by name, and Venus just pouts, “Oh, poo.Â  So you know who I am?”Â  Heh…Â  Norm summarizes the events of the last miniseries, Namora’s World War Hulk activities, and what all has happened with the team (a pretty well-done way to sneak in the exposition, really) while Venus just smiles and listens to what she already knows.Â  She turns on a hidden transmitter, allowing Master Woo to offer Mr. Osborn a deal.Â  “I would like my operations to proceed uninterrupted…Â  At the very least, not bombed.”Â  Jimmy requests only that the Atlas employee who gave the government the location of their hidden base at the beginning of the issue be turned over, andÂ Norman arranges for that employee (as well as Man-Mountain Marko and a force of his own cannon fodder)Â to be taken into custody by the floating Uranian saucer of Marvel Boy.Â  Unfortunately, once he makes it to Atlas headquarters, Man-Mountain Marko has a smart moment, and realizes that there’s something amiss.Â  The “mole” reveals himself to be Jimmy Woo, under a Marvel Boy-created psychic disguise, Marko threatens to turn them in,Â and is summarilyÂ EATEN by Mr. Lao, the dragon who chooses the Khans (and the secret power behind the throne of Atlas.)Â  The issue closes with the reveal that another successor to the throne of Khan is en route to their position: Temugin, the son of the Mandarin.Â  (DUN dun DAAAAH!)Â  The issue is capped off with a short storyÂ set inÂ the 50’s, wherein Marvel Boy, Jimmy and Gorilla-Man encounter a young Wolverine in Cuba, andÂ the stinger (no pun intended) that indicates that alien mind-controlling bugsÂ have been manipulatingÂ  Fidel Castro.

This issue was delightful in tone and dialogue, with the Agents of Atlas achieving a wonderful character balance throughout.Â  Venus is flirty and interesting, Gorilla-Man the sarcastic veteran, Namora serves as the taciturn enforcer, and Marvel Boy and Human Robot counter-balance one another as strangely alien presences, each revolving around secret agent Jimmy Woo, now the head of a universal secret agency.Â  The whole team is entertaining, and Jeff Parker turns in a script that emphasizes the team’s unique place in this new world order, even making Norman Osborn seem intimidating…Â Â  Carlo PagulyanÂ chimes in with Â a pretty spectacular art job, and the overall effect of this issue is one of the few bright spots in the dark and gritty sameness of Chocolate Reign, and the whole package is wrapped up in a gorgeous Arthur Adams cover.Â  The backup tale is one of the few times that I’ve been entertained by Wolverine in recent months (unless you count the story where he diced Jubilee up on panel.) In either case,Â  Agents of Atlas #1 earns a very impressive 4.5 out of 5 stars, nuff said.