By Matthew Peterson on February 9, 2009 2 Comments 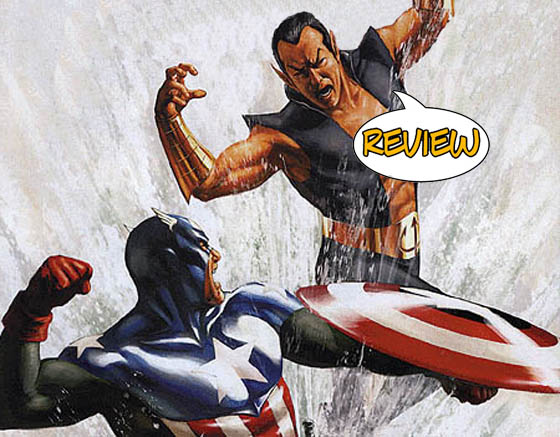 I vaguely recall something about some guy named Steve or some such, but it can’t have been that important…Â  And why does Aquaman have pointy ears?

Previously, on Captain America:Â  The past is prologue for any of the men who wear the red,

white and blue (with the possible exception of Norman Osborn, but he’s another ((MENTAL)) case entirely) but with the former Bucky, it’s a more complex issue.Â  Having spent decades as a Soviet secret weapon, presumed dead, only brought out of suspended animation when somebody needed killin’, he’s experienced much since he put on that band uniform and battled alongside the original Captain America decades ago.Â  At different points in his life, he both saved and tried to murder a Chinese national called Zhang Chin, a man who has recently resurfaced.Â  Under Zhang’s orders, the mercenary called Batroc and a Chinese superhuman known as “The Man Without A Face” have successfully stolen from SHIELD custody what some would call a broken android.Â  James Buchanan Barnes knows this agglomeration of circuits and steel as a comrade, Jim Hammond, the original Human Torch, and will not allow the insult of having his old friend treated like chattel to go unpunished, and thus, Cap is headed for the Far East.

We open in Zhang Chin’s lab, as The Man Without A Face questions how his new leader can be certain that Captain America will follow him.Â  “His past, his honor… History itself will lead him right to us.”Â  Old as he is, though, Chin isn’t senile yet, because Bucky is in transit as they speak, crossing the Indian ocean in a ship that dates back tohis time with the Invaders.Â  Alongside the new Cap is Prince Namor of Atlantis, known to many as the Sub-Mariner, who snarks “Still trustworthy at the controls, then, Bucky?”Â  The two old friends jab at one another, and Namor shows his sentimental side in admitting that he had the old ship rebuilt and that he was willing to help a new man in the armor of his old ally.Â  “I suppose Rogers would be fine with it,” admits Namor grudgingly, and Bucky realizes that this is all the approval he’s ever going to get.Â  The former Invaders remember what the Torch was like in “life,” and Namor agrees that the Torch cannot be made into a slave-weapon.

Barnes explains the SECOND time he met Zhang Chin, a mission during which he botched the assassination of the doc, but managed to kill his innocent wife in cold blood.Â  The Russians considered Chin to be a great threat to humanity, but were never able to destroy his work.Â  Elsewhere, in Hong Kong, Natasha Romanova, the Black Widow meets with a contact who explains a little bit more about what’s going on, and sends Cap instructions on how to find the Professor.Â  Namor and Captain America easily infiltrate the Chinese base, while Zhang Chin converses with a mysterious shadowy figure.Â  “Have you done it, leader?” asks the monstrous form, and the doctor can’t be sure, but he thinks he’s made a breakthrough.Â  I wonder who this creature is, and suspect that the reveal will be shocking as hell.Â  Black Widow finds the information about theÂ  murdered bride and realizes the Barnes is still wanted for murder in China, and that he’s risking his life.Â  Natasha would be horrified to see Barnes’ next move, as he dresses in Winter Soldier garb again, and engages the enemy in the hopes of them recognizing him…

As always, Ed Brubaker delivers a gripping tale, without any of the strangeness that last issue left me with.Â  Seeing Namor in action is always nice (when he doesn’t look like a drunken porn star, mind you) and the nods to the years of camradery between the former Invaders is very well done.Â  Subby doesn’tÂ  consider the fact that Bucky was a kid when they fought together to make him any less of a warrior, nor any less worthy of his word, which is a nice touch.Â  I’m still wondering what in the hell is going on with Zhang Chin, as well as what plans are ahead for Jim Hammond (though I hope to see him returning to action, as I’ve always been a fan.)Â  Overall, this is a nicely done issue, with the usual excellence from Steve Epting, and great moments for several Marvel characters.Â  Captain America has been excellent for several years now, and this issue is one that upholds that honor.Â  Captain America #46 earns 4 out of 5 stars, leaving me impressed with both the quality of the book, and the ease with which I’ve accepted Mr. Barnes as the new Cap.