By Matthew Peterson on February 8, 2009 0 Comments 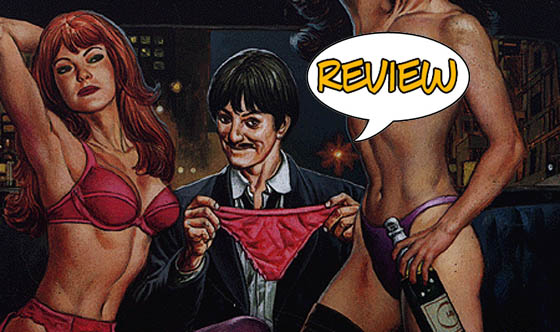 The story of The Mates has a great many parallels to the story of a certain band from the 1960’s, yes, but it’s very important to remember that whatever happens, these are not the Beatles, and there is no chance of hearing Yoko Ono howling like an ocelot being fed into a wood chipper…Â

You can put your earplugs away.

Previously, on Greatest Hits:Â  The Mates were the greatest superhero team that Europe had

ever seen…Â  Crusader!Â  Patriotic Powerhouse!Â  Solicitor!Â  Dark Detective!Â  Vizier!Â  Mystical Maven!Â  Zipper!Â  Amphetamine Avenger!Â  Four men, linked together by fame, money, drugs and, oh yeah, something about heroism.Â  With Archie Sugg, their personal interviewer, in tow, they embodied the meeting of Fab and Fantastic foursomes.Â  Unfortunately, they were men as much as they were super, and the team eventually melted down.Â  Decades later, Archie Sugg’s son, Nick and his friend Ethel have been putting together a documentary about the long-lost heroes of yesteryear, discovering secrets, lies, and a lost reel of film showing what REALLY happened when the Mates fought aliens in 1974…Â  Well, part of it, anyway.Â  At the end of last issue, the long-lost Vizier returned to show Nick and Ethel what really happened when aliens stopped being polite, and started getting real.

Through the magic of… well, magic, Vizier, Ethel and Nick stand and watch the Mates fighting against green scaly bastards from space, and are both amazed and horrified to watch them all fall.Â  First Vizier, then Zipper, then Solicitor are dropped by waves of aliens.Â  Only Crusader’s near-invulnerability saves him, but as Archie films, he’s horrified to hear the words from the flag-bearing superhuman.Â  “We give up…”Â  The five men are taken into custody and beaten, as the ghostly trio watches.Â  “Your father is a good man, Nicholas Mansfield,” intones the Vizier from the future, and Nick scoffs.Â  “I know him better than you do,” says Vizier, as they watch an amazing sight.Â  With a little help from his friends, Archie himself breaks free, grabs a giant alien rifle, and fires into the machinery that opens the airlock.Â  “The name is SUGG, you mother$&@in’ lizards!”Â  The team uses their powers to keep from being sucked out into space, and Nick wonders, “What happens when your father, the man you’ve blamed your entire life on, what happens when THAT guy saves the universe?”Â

They teleport back home, and Ethel flirts mercilnessly with the time-lost Mate, while we see more history of The Mates.Â  Solicitor (embodying the John Lennon archetype) and his wife Soul Sister, go public with their identities while appearing naked ala the Two Virgins album cover.Â  It’s an ominous moment for anybody who knows how this archetypes story is supposed to end.Â  We also flashback to a moment with youn gNick waiting for his dad to come and teach him to play baseball, only to be endlessly disappointed.Â  “My father saved the universe, but he’s still an @$$hole.”Â  After the alien invasion was botched, the Mates broke up, leaving Archie out of a job.Â  Crusader immediately starts a new team, The Unit, only to find that the name was already taken, changing it to “The Unit, featuring the Crusader.”Â  Ironically, almost all the new team members have wings.Â  Zipper cycles through rehab, and nothing is quite the same again.Â  As they come close to finishing the movie, Ethel and Nick argue over edits, until she brings in “another pair of eyes” to check it out:Â  Nick’s former girlfriend Alison.

This series reminds me of old-school Vertigo, back when guys like Morrison, Moore, Milligan, and some writers who probably didn’t start with “M” were knocking them out of the park every month.Â  As a fan of sixties music and the history (though I admit to much more familiarity with The Monkees) as well as the superhero ouvre, this book feels really special, and the overall message of this issue, that it doesn’t take a funny costume to be a hero, is one that resonates with me.Â  It’s really well-drawn, a rare interior job by former Hellblazer cover guy Glenn Fabry, and the dialogue is wonderful throughout, especially when the characters realize that the climactic alien battle has caused one of them to lose control of their bowels.Â  Greatest Hits #5 earns a helter-skelter 4 out of 5 stars, and if you haven’t been reading this one, I highly recommend you pick it up in individual issues or in trade…