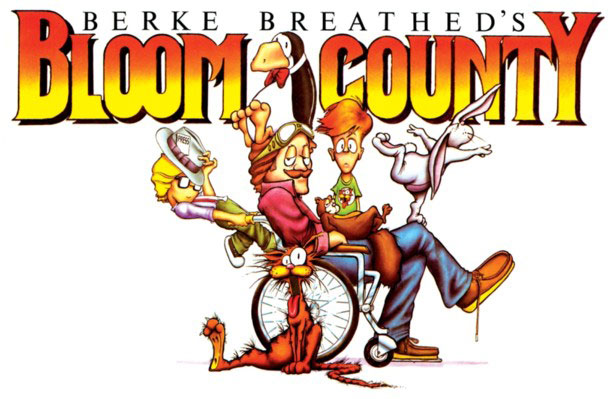 (San Diego, February 6, 2009)Â  IDW Publishing is pleased to announce the forthcoming release of The Bloom County Library. Beginning in October 2009, each of the five volumes will collect nearly two years worth of daily and Sunday strips, in chronological order. This will be the very first time that many of these comic strips have been collected, and the first time in a beautifully designed, hardcover format. The books will be part of IDWâ€™s Library of American Comics imprint, and designed by Eisner Award-winner Dean Mullaney.

“Fans have pestered me for years,â€ said Berkeley Breathed, â€œfor this ultimate Bloom County collection in that polite, respectful badgering way that only fans can manage. Thank God I can now tell them something better than just ‘please remove your tent from my lawn.’ I can say, ‘It’s coming!”

Berkeley Breathedâ€™s Bloom County is one of the most popular and critically acclaimed newspaper strips of modern times. Premiering on December 8th, 1980 â€” a month after the election of Ronald Reagan as President â€” the strip brought to the comics pages a unique amalgam of contemporary politics and fantasy, all told with hilarious humor and wit.

The beloved and quirky denizens of Bloom County include Opus, Steve Dallas, Bill the Cat, Milo Bloom, Michael Binkley, and Cutter John.Â  Breathed was awarded the Pulitzer Prize for Editorial Cartooning in 1987 for his work on Bloom County. The strip was published in an astounding 1200 newspapers.

IDW Publishing Special Projects Editor Scott Dunbier conceived the series. â€œIâ€™m absolutely thrilled to be editing the Bloom County Library,â€ said Dunbier. â€œThis is a series that I canâ€™t wait to hold in my hands.â€

The Bloom County Library will also contain a series of â€œContext Pagesâ€ sprinkled throughout the volumes. These pages will provide perspective for the reader, presenting a variety of real-life events and personalities that were contemporary at the time of original publication.