By Matthew Peterson on February 4, 2009 0 Comments 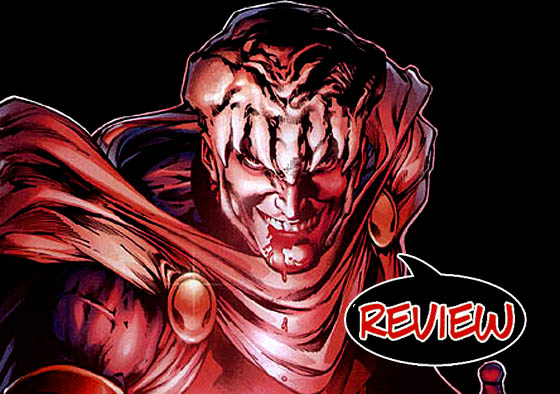 That is a pretty scary picture, but riddle me this…Â  What kinda creature is that skull-hat FROM?

Something with nephews, and Marvin got eaten…Â
Bombshell’s inducted, Kid Devil got beaten.Â
Robin showed up with his girlfriend and quit, these are a few of the Titans big hits.Â

Misfit arrived, as the bat-boy was leaving…Â
Wonder Girl got a new suit and quit grieving.Â
But her team lineup’s still giving her fits, these are a few of the Titan big hits.Â

When the dog bites…Â
Marvin’s guts out…Â
but Wendy gets away…Â
I simply remember the Titans big hits, and wonder when the hell Static is showing up so there’s at least one character in the book with whom I’m emotionally involved who isn’t Marla’s nephew Gopher.Â

(Sing to the tune of “My Favorite Things,” presuming you can get that last rant in four/four time and perfect harmony…)

We open with a mysterious man (whom I was immediately certain was Brother Blood) trapped in hell, held in the middle of a mystic field of some sort, hovering in torment for eternity.Â  In the time since he was sucked into the void some time ago, he has grown from child into man, and also popped his cork utterly.Â  He suddenly fingds himself freed (because of the chaos unleashed by the Reign in Hell crossover) and sets out to escape hell.Â  He turns his powers (the ability to steal people’s lifeforce) on a demon, and uses his magic to find the one who cursed him, Kid Eternity.Â  The Kid pulls up a dead Teen Titan to fight Brother Blood, and use his weakened powers to escape from Aitch-Ee-Double-Hockeysticks.Â  He succeeds, but Brother Blood jumps him just as he teleports out, and both of them burst back to reality, ohp, there goes gravity, and splash ashore at Titans Tower.

Blood coldcocks Eternity, but when he wades out of the surf, finds himself faced with his worst enemies…Â  sorta.Â  Only Wonder Girl remains from the Titans team that he faced back in the day, but they are Titans still.Â  The team tries to mobilize, but Brother Blood steals first Misfit’s power, then Wonder Girl’s, then gets blasted by Bombshell.Â  Traci 13 (still on hand from last issue’s membership drive) tries to magically take him down, while Bombshell taunts Wonder Girl about having no powers (“Now I know how Robin feels,” she responds dryly…Â  Heh.)Â  When Brother Blood finally goes down, he leaps up with a last-ditch effort and bites Kid Devil, then cries out in horror.Â  “”You’ve tainted me!Â  Taine with the Power of NERON!” cries the looney (a worshiper of rival demon Trigon) before using Kid Devil’s powers to escape.Â  The issues closes with Brother Blood arriving at a party in New Hampshire, home of one of the last Trigon worshippers, creepily naming her his new mother and vowing to use his powers to take over the Earth, realizing that the turmoil in Hades means he’s one of the last truly infernal powers left on the planet…

I don’t know why this issue left me with such a huge feeling of “meh.”Â  Sean McKeever’s script isn’t bad, though the the plot is a fairly straightforward thing.Â  The presence of three different teleporters makes the switching of locales a little too easy, and the art is competent, but nothing special.Â  Unlike the Wonder Woman issue I covered on the last podcast, this really is a story about the Face of Evil on the cover, but the story isn’t actually that compelling.Â  Sebastian Blood should be creepy, but in his sleek superhero-like costume, he’s like a long-lost X-Men character, and the depiction of hell is indistinct and more than a bit weird.Â  This issue does the basic “establish the villain and his motivation” bit well enough, but if comics were food, this would be a four-piece McNugget box.Â  There’s some meat to be had, but it’s mostly processed and shaped into something that is inoffensive, but terribly bland.Â  Overall, Teen Titans of late has been essentially unremarkable, and this issue continues that trend.Â  Teen Titans #67 earns a just-to-the-left-of-middle-of-the-road 2 out of 5 stars.Â  I’ve been hoping that things pick up on this book soon, but I’m starting to wonder if there’s really a change coming…