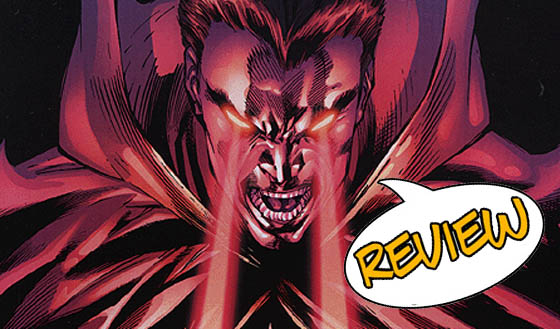 You give this guy some claws, and I think Rob Liefeld might have a lawsuit for ya…

Previously, on Justice League of America:Â  There’s a thing, with an alternate universe?Â  And Icon and Hardware and the Shadow Cabinet were there?Â  And, somehow, Superman and Icon were willing to let all their teammates beat each other senseless over a macguffin?Â  And the macguffin actually seemed to be a candle that is the last remains of Arthur Light, inveterate looney-tune, Elongated wife violator, and general schmendrik?Â  And, at some point, I think Hawkman showed up, in the same manner that Dirty Steve busted into the movie Young Guns four of five times to scream plot points like “Charlie’s gettin’ married!”?Â  And weirdly enough, there was just enough cleverness going on to balance out the fact that the group consistedÂ ofÂ characters who may or may not be dead, in the past, beaten to death by Genocide, trapped on New Krypton, impaled on an arrow, joining the Outsiders, or sucked out of the timeline by a giant mystical deck o’ cards?

This Faces of Evil special gets mis attention on the very first page, with two names that I haven’t seen in a while: Len Wein and Chris Cross.Â  Starbreaker addresses us (or at least addresses somebody) in full fledged lunatic supervillain mode, orating loudly about how he was taken out by “the thrice-cursed Justice League of America!”Â  He tells us the story (one that takes place during the League’s old Satellite-era) of how he faced down the old-school JLA, including a shirtless Hakwman, a not-yet-dead Barry Allen, Hal Jordan when his uniform had trunks and Art Curry in orange chainmail.Â  The team mobilizes against a series of threats, while Starbreaker oversees, analyzing and looking for weaknesses.Â  The big pink pointy-haired assclown beams in and attacks, only to get the attention of the JLA’s first-strike team.Â  Superman, Flash and Green Lantern are easily defeated by the energy vampire and the team regroups at their orbital headquarters.

Starbreaker responds by dragging Earth out of it’s orbit, forcing the team to move into action.Â  Green Lantern beams up a green harness, hooks it to the Last Son of Krypton, and together they desperately try to pull the planet back.Â  Flash, Batman and company attack Starbreaker, and Batman figures out that the hopeful cheers of the crowd somehow weaken the vampire, giving the HalÂ & Kal connection the crowd boost that allows them to pull off their finishing moves, while AQUAMAN gets in the final blow on Starbreaker withÂ a good left hook and a clever line, and ‘Breaker laments his loss, and explains that the Oans tossed him into a shadow universe, an inescapable prison for vrtually everyone…Â  except the man to whom he’s speaking.Â  “Call me… Shadow Thief!”

Hmm…Â  This issue’s storyÂ is one that I’ve read before (though the story itself is nearly as old as I am, I have a pretty good run of Bronze Age JLA) but the overall comic is a mixed blessing.Â  Chris Cross does interesting work, not at all reminiscent of his days on Blood Syndicate, and Len Wein delivers an interesting retro treatment of the team.Â  I can’t tell if I’m old, if Len is intentionally tweaking the cliche dialogue of 1972, or what, but some of the lines were cheesy in an almost awesome way, while others fell seriously flat.Â  Having Arthur Curry throw the final punch that takes him down reminds me of why I miss Aquaman (Let’s see YOU get by underwater the way that he does on the ground!) and there’s some nice team moments as well.Â  Problem is, it’s not our CURRENT team…Â  The weakness of the book comes in having it be mostly flashback, especially at a point where last issue’s storyline was starting to coalesce into something I was interested in.Â  It’s almost a non-sequitur, though it does explain Hawkman’s assertion that a godlike madman is about to destroy the universe.Â  The good and bad even out here, though, giving this issue an appeal that’s hard to deny.Â  Justice League of America #29 earnsÂ 2.5 out of 5 stars,Â an atypical issue for this series, but not a bad one at all…