By Stephen Schleicher on February 2, 2009 3 Comments 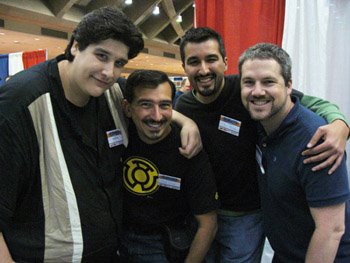 Oh man, talk about opening mouth and inserting foot.Â  This lead to all sorts of reactions including this well thought out post by Jeph Jacques, which ultimately lead to Mr. Swaab issuing a public apology.

Oh and hey, those webcomic things have a bunch of panels at the New York Comic Con, featuring many of those webcomic gurus featured in the image above.

How to Safeguard Your Comicâ€™s Intellectual Property

You or your company have created the ultimate spandex-clad protector, but how do you protect him or her from being ripped off? Through this seminar, you will learn how to protect the intellectual property in your work and ideas. Friday, 11:15 A.M.-1:15 P.M., Room 1A23

The Business of Webcomics! LIVE!

What challenges do we, as publishing professionals, face with the rise of new media? How has it influenced the editorial process and the promotion end of things? How have web comics affected the industry? And, what happens when web comics transition to print? Friday, 3:30 -4:30 p.m., Room 1A22

Created originally for grade school classrooms, watch, learn and participate as Penny Arcadeâ€™s Gabe and Tycho teach you and your kids how to make comics! Although appropriate for all ages, this is a very kid-safe panel! Sunday, 12:30 -1:30 p.m., Room 1A24