By Matthew Peterson on February 1, 2009 2 Comments

Or – “The Villain Revealed!” 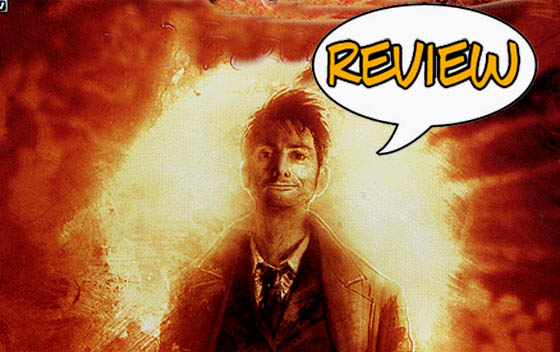 The mysterious man from Gallifrey known as the Doctor has fought against endless perils in the last 45 years, from Cybermen to Slitheen, from Rani to Mara to The Master and back, even against his own fashion excesses (Doctor #6, I’m looking at you…Â  And don’t you look too smug, either, Doctor #4.)Â  But the previous issue of this miniseries left us with the decided impression that the villain in question was actually the hero himself.Â  The phrase “I am my own worst enemy” seemed to fit the situation, but is everything really as it seems?

Previously, on Doctor Who – The Forgotten: Having found a museum devoted to himself, and had the memories of his lives removed, the Gallifreyan who prefers to be called The Doctor has had to re-experience memories of all ten of his incarnations, rebuilding lifetime after lifetime of memories.Â  Each of his former selves taught him something important that might help unlock the truth about what has been going on (including some fascinating tidbits regarding his mostly-unknown 8th incarnation, and cute scenes with his Fifth and Ninth selves…)Â  Along the way, he realized that everything wasn’t what it seemed, and that his faithful companion Martha Jones wasn’tÂ really Martha at all, butÂ construct of the TARDIS itself.Â  He finally figures out the hidden clues, and the manipulator stands revealed as… THE DOCTOR!

Wellll, no.Â  Not really.Â  Though my copy of the issue is missing the dialogue from the first page, even The Doctor himself doesn’t believe that his doppelganger is the self he left with Rose Tyler at the end of season four…Â  “I…Â  He’d… WE’D never have such a crap beard!”Â  Heh.Â  The duplicate claims that he is instead the Doctor’s lost future self, The Valeyard, last seen selling out the Sixth Doctor in the hopes of stealing the rest of his regenerations.Â  “Now, THAT’S just stupid,” replies Number Ten.Â  Heh.Â  The Doctor realizes that this is obviouslyÂ some sort ofÂ creature that had been on the Crucible with him at the denouement of the episode “Journey’sÂ End.”Â  The Doctor and Martha take off at a dead run,Â and theÂ mind-sucking creature sends his minions to catch them.Â  The DoctorÂ asks if the composite companion can change appearance, (since Martha’s exit is still a bit of a sore point)Â and suddenlyÂ the TARDIS-beingÂ morphs into Harry Sullivan, who cracks one of their robotic attackers on the head.Â  The Doctor urges the companion to go on “shuffle mode”Â and suddenly Leela the savage leather girlÂ appears to stab their attacker.Â  The Doctor actually seems to enjoy seeing his old friends, even as he runs for his life, with his companion changing as they go.Â  He realizes that the center of the whole mess seems to be hidden behind a force field that keeps out organic life.

The companion quickly turns into Kamelion (one of the Doctor’s rare robotic companions) and finds that the energy shield hides only an 0ld-school TARDIS console.Â  The companion morphs intoÂ Adric, who then figures out how to free the doctor’s mind by sacrificing himself again.Â  His other self arrives and a fight ensues, causing the Doc to drop the bag filled with the mementos of his previous lives.Â  “You made one vital mistake,” says the Doctor.Â  “You tried to kill a time lord…Â  The LAST time lord, in fact…Â  Here, in the matrix…Â  No Time Lord is just a single person.Â  We are all the sum of our past lives.Â  And when you deal with one of us…” 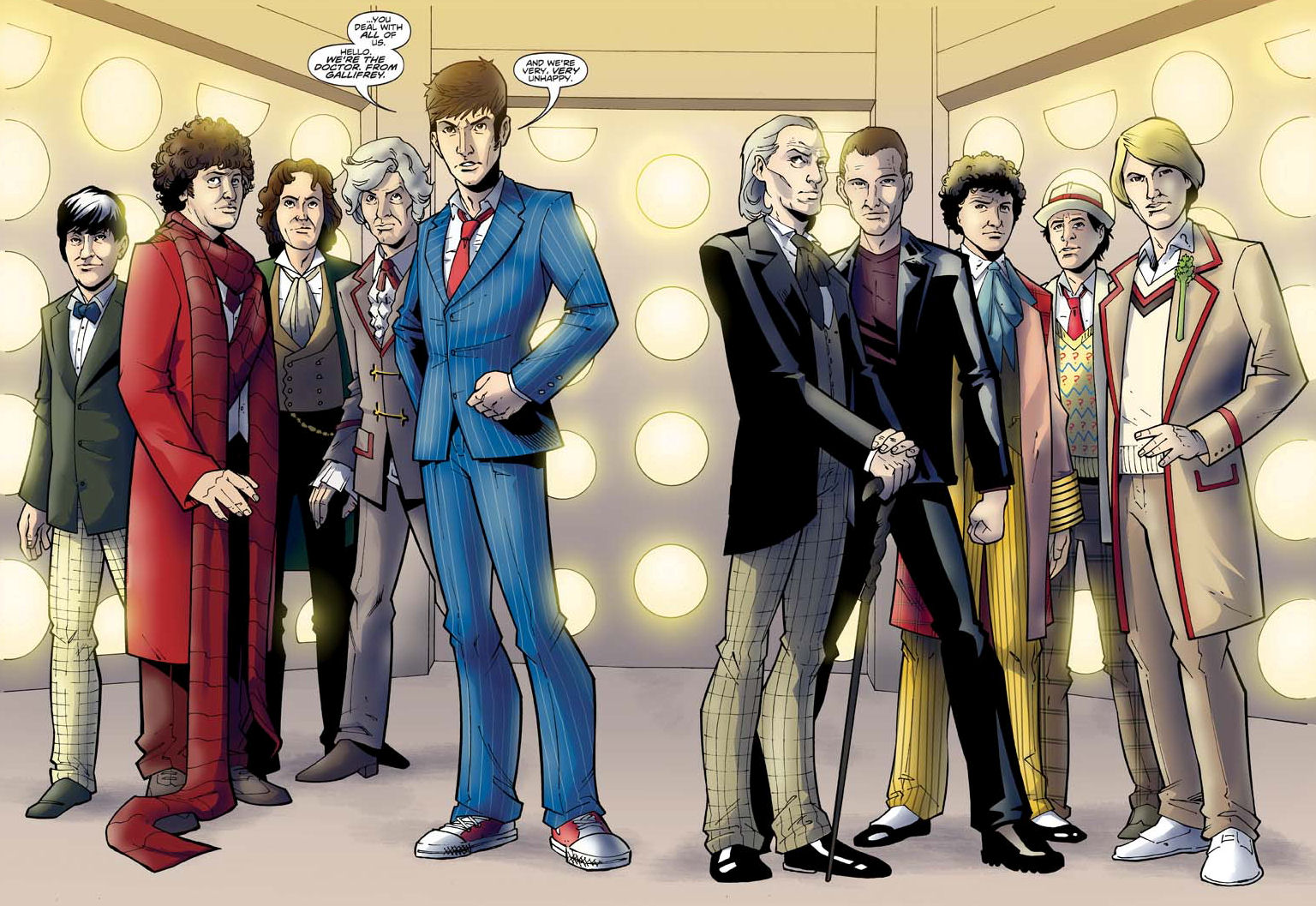 I really couldn’t resist.Â  That is a truly awesome moment.Â  And Doctor Number Nine looks like he’s ready to kick some ass, doesn’t he?Â  The Doctor(s) offer a boon, but the creature pretending to be one of him refuses.Â  “I’d rather die than be your pet.”Â  The Doctor sadly accepts this premise, and telepathically reminds the TARDIS matrix that there’s only one Time Lord left in the universe, andÂ this usurperÂ ain’t it.Â  The creature finds his false Doctor facade running like super-heated wax, and there’s an interesting moment where the Doctor watches his enemy melt…Â  At this point, the First Doctor steps forth and remarks what a terrible way it is to go.Â  The Tenth Doctor is stunned to realize that his past selves seem to be able to communicate, but the First snorts.Â  “I would have liked to have believed that I would have gained at least a modicum of intelligence in my old age, hmm?Â  Perhaps not?”Â  The other Doctors all take a moment to interact with their latest self, then fade away into nothingness.Â  The Doctor is left alone, save for the composite intelligence, of whom he asks one favor.Â  “She” suddenly turns into the Doctor’s grand-daughter Susan, whom he hugs, and apologizes for leaving behind years ago.Â  They both share tears, and Susan sends him back to reality from the Matrix, where he sets off again on his travels.Â  Before he does, though, he pats the TARDIS console, and murmurs a thank you before heading into space, his destination the resort planet Barcelona…

I have to say, honestly that parts of this issue work for me, parts don’t.Â  The art works, mostly (although the Third Doctor never quite looks right) and the parts where it falls down on the job aren’t deal-breakers.Â  The story clips along, reveling in the history and characters of Doctor Who, even causing some almost-tears when the Doctor finally got to give Susan a proper goodbye.Â  If there was any weakness to it all, it was in the conceptualization of the villain, and the fact that it’s powers made the entire series a literal headgame.Â  (“Ey, who set dis t’ing to Connect Four?”)Â  Still, the journey was enjoyable enough, and the little moments of character with the previous nine Doctors hit the mark, with Number One crochety and high-handed, Number Two congratulatory, Number Three taking a potshot at Four, who responds with a joke, Five pleasantly confused, Six self-important, Seven taking the starch out of Six, while Eight laments the previous lives, and Nine gets in the line of the issue.Â  “Before we go…Â  you were fantastic!” TheÂ issue itself may have been a bit uneven, but I still maintain that this series is Â the best-written Doctor Who comic book adaptation to date, and one of the most faithful as well.Â  Doctor Who – The Forgotten #6 earns 4 out of 5 stars. Now I’m going to go watch “The Next Doctor” again…