Or – “Avengers, Continue To Assemble!” 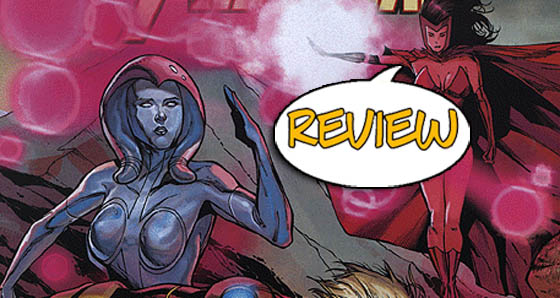 In the decades since the Avengers first formed to take on the threat of Loki, there have been some really unusual lineups.Â  With another giant crossover event behind us, it’s time for new membership, and this issue’s cover promises the return of not only a woman who killed three of her teammates, and wiped out the mutant population of Marvel Earth, but a robot infused with the brain patterns of a dead woman, and a man with multiple personality disorder who has recently named himself after his deceased spouse.Â  I wonder if Marvel can copyright “Mighty Odd Avengers?”

Previously, on Mighty Avengers:Â  There’s an old adage that says, “Don’t keep all your eggs in the same basket,” or words similar to that.Â  The Avengers never seem to learn this lesson, as every ten years or so, the team is forced to deal with whatever financial catastrophe has befallen Anthony Stark.Â  This latest incarnation of the Mighty Avengers has, to date, been Tony’s “dream team,” his personal Avengers, with a lineup that really didn’t make all that much sense.Â  Ares and the Sentry have joined up with Norman Osborn’s Dark Avengers, the Wasp was lost in battle, the Black Widow not speaking to Iron Man, Iron Man himself on the run, Wonder Man about as dynamic as a pancake made of stucco, and Ms. Marvel running with the New Avengers again, this book doesn’t have any supporting cast members left on line.Â  Are you ready for 30 pages of “Hey, It’s That Guy!”

I’m not.Â  The issue opens with Young Avengers Stature (the daughter of Ant-Man) and the Vision (a rebuilt android version of the original) walking the grounds of the old Avengers mansion.Â  The couple notices a new statue in the garden of lost heroes, a rejpresentation of the Wasp in her last costume.Â  “According to my files,” says Vision, a phrase that I’m sure we’re going to hear faaarr to much of, “the Maria Stark foundation commissioned it from Alaicial Masters upon the event of Janet Van Dyne’s death.”Â  That is seriously morbid.Â  They suddenly find their teammates turned to stone in the middle of the mansion grounds, and run away, only to find Wanda Maximoff, The Scarlet Witch, hovering above the city.Â  Here’s a problem with the scene that I have: The Vision grabs Stature and flies away.Â  He’s obviously had an upgrade, as the old-school Vision never flew, he just turned intangible and floated on air currents.Â  Scarlet Witch teleports away, taking the Young Avengers with her, as a tide of blood floods New York City.Â  Wait, what?Â  A series of disasters spreads across the world, fire from the skies, boiling seas, dogs and cats, LIVING TOGETHER!!!Â  In Southwest Kansas, Edwin Jarvis suddenly finds the entire state of Oklahoma (including Asgard) missing from the map.Â  He is met by Amadeus Cho and Hercules, likewise searching Thor, and Jarvis sets off to find the one man who could lead a new team of Avengers: Captain America.

Unfortunately, Captain America and the New Avengers are dead, killed on panel by some sort of strange growing virus.Â  The Scarlet Witch witnesses their deaths, and suddenly teleports to Toronto, gafling the U.S. Agent to fill her “patriot with shield” team slot.Â  Alpha Flight is likewise killed on panel, and Iron Man finds himself overwhelmed by volcanoes.Â  While Tony Stark rockets into space, Wanda grabs the (green) Hulk from somwhere frozen (I thoughtÂ Bruce BannerÂ was in prison?) while Hercules, Cho, and Jarvis seek out Doctor Pym.Â  Cho and Pym compare brains (when Amadeus claims to be the seventh smartest person on Earth, Hank replies “I’ve been off-planet for a while.Â  You should probably knock yourself down to eighth.”) and they realize that the source of the magical energies is Mount Wundagore, former home of the High Evolutionary.Â  On the mountain itself, we find that Modred the Mystic has once again popped his cork, channeling the power of the Darkhold to torture someone we don’t see.Â  Hercules forces Hank to act, accusing him of being afriad to lead the Avengers, and Hank admits that it’s true.Â  He never felt like one of the big guns, and when he discovered that Iron Man was Tony Stark, realized he wasn’t even the smart one.Â  Jarvis points out that Tony Stark, while smart, is the main reason the Marvel universe is on Death Row, and he finally agrees to lead.Â  They teleport to Wundagore (through the use of Pym pockets, shrunken bits of space that have multiple exits in space/time) only to find the Scarlet Witch awaiting them.Â  She tells him to say the words, and there will be heroes to follow him.Â  “Avengers Assemble!” he cries, and her recruits and his stand together.Â  Inside the mountain, Modred uses all his power, and shows us who he’s been torturing:Â  Quicksilver, (now with added demonic possession!)

Here’s my major problem with this issue: timing.Â  It comes after the formation of the New New Avengers, after Norman Osborn went public with his Dark Avengers, at a point where the Hulk is running free, where Hercules and Amadeus are in the United States, where Tony Stark has regained part of his fortune, where Quicksilver (last seen by me in Mutant Town) has been kidnapped…Â  Blah, blah, blah.Â  I don’t dislike the issue, I just find it breakneck in it’s pacing, and pretty unclear in everything except the fact that Hank Pym has had a huge upgrade in powers and abilities with the loss of his ex-wife.Â  It’s nice to see Jocasta again, and the little glimpse of romance between Vision and Stature was high-school cute.Â  I think my greatest complaint with this issue is that I suspect it’s meant to be a big ol’ status quo altering issue, but most of the characters (and the Mighty Avengers title) doesn’t really have a status quo to tamper with.Â  Hank has been in a bubble, Jocasta has been deceased, the Young Avengers on permanent hiatus, etc.Â  In a Marvel Universe that has pretty much rocketed from crisis to crisis (none of them final) there’s no shock in seeing the U.S. Agent, Hulk, Hercules, Scarlet Witch, Stature, the Vision, Jocasta and the new Wasp together, since most of them just had a big fight together in Central Park.Â  This issue is okay as a setup, but fails both as a story, and at being suspenseful.Â  Mighty Avengers #21 earns a half-hearted 2 out of 5 stars, with some okay art, but not enough focus on what it all means…