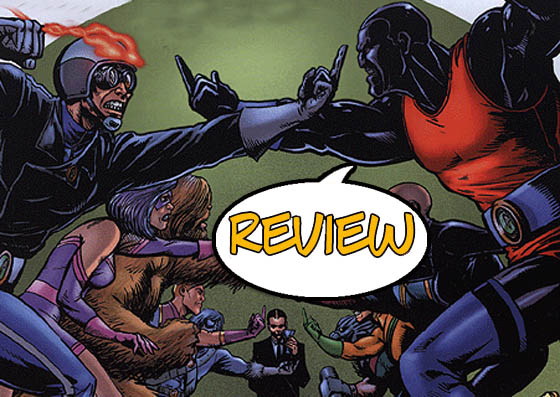 …is a terrible, terrible disease (which I’ve just made up) describing the tendency of an undercover character to get too involved in the lives of those with whom he is covering under (not to be confused with “Donnie Darko Syndrome,” which is characterized by talking to giant zombie rabbits) and an inability to act in one’s own best interest.Â  Inspector Hugh Campbell, our very own Wee Hughie, has infiltrated the G-Men, but doesn’t yet realize that he’s in too deep, and the water ain’t gettin’ any shallower…

Previously, on The Boys:Â  Billy Butcher is a man with a mission: Keep the superpowered bastards that haunt his world in line.Â  To try and get more information about the mysterious John Godolkin and his “G-Men,” he has placed Wee Hughie in one of the G-Men’s offshoot groups, G-Wiz, which Hughie finds to be a perverse sort of frat-boy environment, one which he doesn’t entirely dislike.Â  Worst of all, he finds that the supes, outside their costumes, are actually likeable (if seriously f’ed up) people.Â  Godolkin’s people have, so far, accepted “Bagpipe” as one of their own, but Hughie’s credentials may not hold up to higher scrutiny.Â  As for Butcher himself, he has managed to capture a hard drive belonging to one of his informants, in the hopes that he can figure out a little bit more about the mysterious death of one of Godokin’s “children,” her mysterious last words, and her motivations…

We start with another sterling G-Wiz moment, as Hughie tries to tell his new pals goodbye, only to find them all in the bath (together) while Blowchowski urinates across them all.Â  The scene isn’t in nearly as good taste as that description makes it sound, I might add.Â  He checks in with Butcher, inicating that he has put all the bugs in place to allow The Boys to listen in, but still wants to hang out with G-Wiz a bit longer.Â  “All I’m talkin’ about’s tryinna find them a way out, Stop them becomin’ the sorta problem we have to deal with.”Â  Butcher understands, but cautions him: Once a supe, always a supe.Â  In a fit of irony, Hughie sets off to meet his new girlfriend Annie, who (unbeknownst to him) as actually Starlight of the notorious superhero group The Seven.Â  While he and Annie get reacquainted, we see the man of the hour, John Godolkin, bidding his super-kids hello.Â  “Welcome, my G-Men.Â  Welcome…Â  to BRUNCH.”Â  HA!Â  The vaguely familiar team members (including the furry guy, the guy with some sort of eyebeams, and the guys who has hammers for hands) discuss their current situation, including their plethora of new members, but Godolin doesn’t believe in enough.Â  “When it comes to G-Men, there is simply no such word.Â  For good or for ill, my children, I just can’t seem to stop.”

We check back in with a post-coital Hugh and Annie, who discuss their jobs in code, dancing, as alays about the fact that each has a secret, and transitioning into a discussion about love.Â  He points out that they’ve only been together a few weeks, and probably aren’t ready for this conversation, and she responds by jumping him.Â  They’re a really cute couple here, but I suddenly realized during this sequence that regular penciller Darick Robertson is absent, and the new guy can’t quite capture the “cute yet slutty” thing that Starlight has under Darick’s pen.Â  While the twosome again have sex in a meadow, we find Butcher, continuing to tear apart the hard drive in search ofÂ some evidence, until he finds a file that makes him drop his drink.Â Â Â Elsewhere, we joinÂ Mother’s Milk checking in with a man at an old farmhouse, trying to figure out the last words of the dying G-Man a few issues ago (“Where’s Uncle Paul?”) and finally convincing the man in the house to open the door, by asking why his brother committed suicide…Â  As M.M. makes the first real break in the case, Hughie and Annie return to a clothed state and their respective lives, while the G-Men welcome their West Coast branch back into the fold.Â  Sort of.Â  The G-Men are casually racist about the teams’ return,Â and in fact most of the team seems unable to tell the two teams apart.Â  During this whole brouhaha, one of the G-Men casually mentions that Bagpipe’sÂ papers aren’t quite in order.Â  Â Meanwhile, Butcher regains his senses and talks to his bulldog Terror.Â  “Ol’ Billy threw a bit of a wobbly earlier on, but he’s alright now.Â  Ol’ Billy might have to kill some stupid #*@$, that’s all.”

It’s a very unnerving scene, with Butcher having put a fist through his monitor, and obviously still not happy, though he pets his dog seemingly calmly.Â  There’s a real sense that something big is about to happen in this issue, as Hughie’s cover may be blow, Butcher and Mother’s Milk both find breaks in their cases, and the peculiar psychoses of John GodolkinÂ continue to come to light.Â  The only real weakness in this issue was one of comparitiveness, as fill-in artist John Higgins isn’t quite up to regular artist Robertson’s standards.Â  The plot gets more motion than in the last couple of issues, and Garth Ennis still manages to make us like unlikeable characters with his take on G-Wiz.Â  Overall, this issue is a goody, though not for the squeamish, as perversion and adult themes abound throughout the story.Â  The Boys Twenty-Six is a strong 3 out of 5 star affair, keeping the story arc going without feeling like they’re stretching too hard..