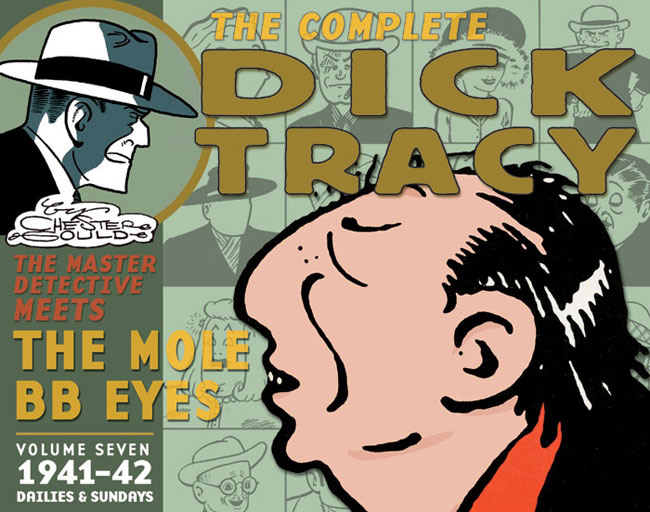 (San Diego, CA; January 30, 2009) — IDW’s successful Complete Dick Tracy series is getting biggerâ€¦and better. CEO Ted Adams, who initiated the series and edited its first six volumes, has announced that Tracy is being folded into IDW’s Library of American Comics imprint, alongside Terry and the Pirates, Little Orphan Annie, and other classic newspaper strip titles.

Eisner award-winner Dean Mullaney is assuming the helm of the series with volume 7 of Chester Gould’s masterpiece, covering more than 600 chronological dailies and Sundays from 1941 to 1943. “This is a dream come true for me,” says Mullaney. “Dick Tracy was the first newspaper strip I remember reading as a child. Over 46 years, Chester Gould’s bold stories and iconic, diagrammatical drawing style created a unified whole that put Tracy in the pantheon of classic comic strips.”

The first big change readers will notice is in the size of each book, matching the larger format of Terry and the Pirates. “Each Sunday strip will be 40% larger,” Mullaney notes. “Some times bigger is better, especially as we enter Gould’s most famous decade — the 1940s — and the introduction of one grand, grotesque villain after another: The Mole, B.B. Eyes, Pruneface, Laffy, The Brow, and Flattop. During this time, Gould could barely keep up with his own imagination, as he also unveiled an ever-expanding cast of supporting characters, such as Gravel Gertie, B.O. Plenty, Vitamin Flintheart, and Diet Smith.” The series will also sport a new cover design.

Size isn’t the only change coming to the series. The scope of the introductory essays is broadening, to offer readers a fuller and more complete history of the strip and its creator, similar in approach to the universally-acclaimed essays for which the Library of American Comics has become noted.

“We’re incredibly excited to announce that we’ve partnered with the Chester Gould family, the Dick Tracy Museum, and the Shel Dorf collection,” Mullaney and Adams explain. “These unique, invaluable resources allow us to add rarely seen art and photographs to these definitive archival editions.”

Each volume in the series will now include a biographical and historical essay by Jeff Kersten of the Dick Tracy Museum, based on never-before-seen family and museum archives, in addition to the continuing insightful story analysis provided by Max Allan Collins.

Dick Tracy vol. 7 will be on sale late April, and will be published on a quarterly schedule.