Or – “Archers, Archers, Everywhere…Â  So Who Keeps Missing The Point?” 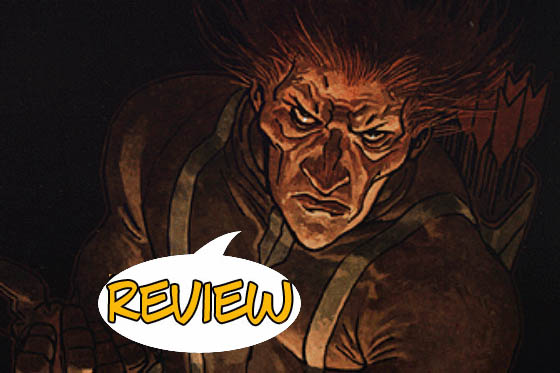 In the world of comics circa 2009, there seem to be only two rules that are universal.Â  First, old characters will be resurrected and represented with a new coat of paint and some sawdust in the transmission as new characters (witness Power Man, Iron Fist, Blue Beetle, Ms. Marvel, Nova, Black Lightning, Vixen, et al.)Â  The second rule is that the days of one writer staying on any title indefinitely are virtually nil, unless that writer’s name is Bendis.Â  Green Arrow/Black Canary was launched under the very individualistic pen of Judd Winick, who had a certain style, a certain way of saying things, a certain feel for the characters.Â  It may not have always worked for every reader, but at least it was unique.Â  This issue promises a new start, with a new writer, new penciller, and a really, really ugly villain on the cover…Â  Can it live up to the previous issues?

Previously, on Green Arrow/Black Canary:Â  After years of flirting, and fighting, and on-

again/off-again, perennial bachelor Oliver Queen and libertated female Dinah Laurel Lance (at least pre-Crisis) finally tied the knot.Â  Almost immediately, all hell broke loose.Â  Ollie, it turned out, wasn’t Ollie at the ceremony (though he was the one who agreed to the nuptuals.)Â  Almost as soon as they returned the real archer from being stolen by Amazons, (?) Ollie’s son, Connor Hawke, was shot.Â  A long and involved chase scene led to Doctor Sivana, who had re-spliced the younger Green Arrow’s DNA, leaving him memoriless, metahuman, and unable to shoot straight.Â  The pseudo-nuclear Arrow clan split up, with “daughter” Mia (Speedy) Dearden going to Europe with her new boyfriend, and Connor setting off for parts unknown, leaving the honeymoon couple alone in Star City.Â  Something ominous happened last issue, but since it only took a few seconds, I don’t know if it counts.Â  Now, ON WITH THE SHOW!

We open with four strangers, sitting in a restaurant that sounds like that place Farva likes, with the mozzarella sticks, and all the $#!+ on the walls (“Shenanigans?Â  You mean Shenanigans, right?”) toasting their latest acheivment.Â  “We saved the whole future!”Â  As the foursome exits the restaurant, though, three of them are taken out with well-placed arrows from above, and we cut to Merlyn the pointy-haired archer (taking a break from his job as Dilbert’s boss) smirking that the fourth kill will earn him an even twenty mill.Â  The kid runs, ducking behind a passing bus, but Merlyn STILL nails the shot, through the window, out the other side, and shish kebabbing the young man’s Isle of Langerhans.Â  While these murders have been taking place, our heroes have been in bed playing… Scrabble.Â  (Mind outta the gutter, puppetman.)Â  A newsflash sends them into their super-suits and out into the streets, where we meet Star City PD Lieutenant Hilton.Â  Ollie and Hilton posture for a bit, and the officer explains that the foursome were old college buddies, computer geeks who went on to work for STAR Labs, Waynetech, LexCorp and the like.Â  Green Arrow and Hilton butt heads for a few moments about vigilantism, before the Lt. tells him the 411:Â  “I only care about one thing: keeping the peace.Â  Help me keep it?Â  We go no problems.”Â Â  Arrow and Canary set off to find evidence of why someone would kill four geeks, but only find evidence that there were FIVE techies who graduated together.Â  “We need to find the fifth person in this photo,” Arrow ruminates.Â  Black Canary quickly makes a call, and Deus Ex Machina Lass Oracle picks up.Â  OracleÂ clicks a couple of keys, and the whole plot is explained in two pages.Â  It bugs me greatly the way this plays, because not only does it make it all a bit too easy, but Black Canary and Oracle seem to be feuding during this sequence, which confuses me as to when it all takes place.Â  In any case, the upshot is that the five kids seem to have created a “biomechanical propulsion system,” a kind of super-motor, and it got ’em all killed.Â

In a warehouse, elsewhere in Star City, we find that the fifth lab geek HIRED Merlyn to kill his pals so that he could be the only one who profits, but Merlyn has other plans.Â  “I contacted an associate of mine in the oil industry…Â  He is willing to pay far more than twenty million to make YOU and IT go away.”Â  Merlyn’s arrow is knocked out of the air by a Canary cry, and the heroes are on the scene.Â  Merlyn greets his old friend Green Arrow with “Ready to die?” and G.A. responds, “Every day.”Â  For some reason I really dislike that interaction, but there’s a sudden fighty-fighty with arrows doing every which way, including right through Black Canary’s forearm.Â  Merlyn prepares to execute her, but loses his bow…Â  fortunately, he’s got a gun.Â  I really hate this sequence.Â  Hate it, hate it, hate it.Â  Not only do they put the CHAIRMAN OF THE JLA in the damsel role, not only does Merlyn have a stupid monologue (“It’s sad.Â  You really DO deserve to die by arrow, because until I pull this trigger, you truly are the world’s greatest archer.”) but it ends with Green Arrow flicking a broken arrowhead into Merlyn’s gun, causing it to explode in his face…Â  They turn Merlyn over to Lieutenant Hilton, and Oliver mentions that his friend in Gotham has a cop pal to turn to, and it’s a Lethal Weapon buddy moment.Â  The story ends with a strange young woman entering the abandoned warehouse where the battle took place (So, there are no cops?Â  The scene of an attempted murder isn’t a crime scene?) and picks up one of Oliver’s left-behind arrows.Â  This scene is kinda stupid, as they’re all just lying around, willy nilly.Â  She takes the shaft and strips down to her bra, then carves the classic “heart with arrow” Valentine symbol on her chest, cooing “I love you.”

This is a very run-of-the-mill, cliche-laden issue from top to bottom.Â  Black Canary has apparently taken a whole bunch of stupid pills, racing straight at an archer when she’s been dating one since 1965 is the kind of move that only a real piece of Samsonite would attempt.Â  Oliver fares a little better, but his tough-guy bravado with Merlyn irked me, and Merlyn’s sudden admission (with NO real impetus, mind you) that Oliver is a better archer, after years of claiming otherwise, rings very false.Â  The plot is a flimsy thing, designed to bring the archers face to face, and the kid who serves as the MacGuffin is so meaningless that he just DISAPPEARS during the battle, with no mention of whether he was caught, whether he ran, whatever.Â  This, by the way, is a man who hired a killer and is indirectly responsible for the deaths of four people.Â  The issue overall suffers from a lack of both consistency and clarity.Â  The art, by Mike Norton, is serviceable, reminding me of a slightly less polished Paul Pelletier, but nothing truly spectacular, and paired with the weak script, leaves us with the impression that this issue just kinda… happened.Â  Green Arrow & Black Canary #16 earns a very disappointed 1.5 out of 5 stars,Â making me greatly miss Judd Winick.Â  Sure, he has a weakness for sentimentality and sex, but at least the plot holes were somewhat smaller, and you could count on Doctor Sivana showing up.