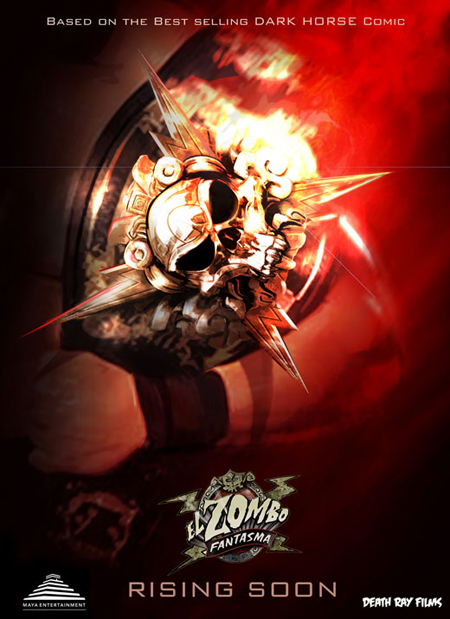 The comic, published in 2005, tells the story of a murdered, temperamental Mexican wrestler who returns from his fiery damnation to play guardian angel to a troubled Los Angeles teenager. Zombo learns the teen is not what she seems and that their fates are intertwined. The character was created by David Wilkins and Munroe when they worked at a video game company. They will act as co-producers.

Oh boy, another Luchador movie!Â  Better yet, after the movie is released, the production companies want to turn Zombo into an animated series.

Complete Press Release After the Jump.

El Zombo Fantasma, published by Dark Horse Comics in 2005, created by David Wilkins and Kevin Munroe, will be produced under the Death Ray Films banner recently formed by Chris Patton, Kevin Munroe and Robert Sanchez who are currently in production on War Monkeys.

The story follows the mysterious murder of the world’s most notorious Mexican wrestler who bargains his way out of an eternity of fiery damnation by returning to Los Angeles to play guardian angel to a troublesome teen, Belisa Montoya. He soon discovers that the teen is not what she seems and that their fates have been intertwined for centuries.

Death Ray Films and Maya Entertainment will bring tales of the undead masked wrestler to multiple mediums starting with the live action feature followed by a new animated series.

Jose Martinez and Kellvin Chavez will produce along with Academy Award nominee Moctesuma Esparza who will executive produce for Maya Entertainment.

â€œZombo started years ago as just a geeky idea between two friends who worked at the same video game company,â€ says Munroe. â€œBut Dave and I always knew that the property had a broader appeal than just its publishing roots, and now we’ll see it finally reach an entirely new audience. I’m thrilled to be a part of creating this new breed of superhero for the big screen.â€

“As a Cuban-American in this industry, I see El Zombo as a unique property that will not only showcase Latinos but also appeal to all audiences. It has action, romance, redemption and wrestling, it’s a Latin Hellboy,” says Robert Sanchez. “It’s the prefect date movie!”

â€œEl Zombo is an extremely cool superhero and it’s tremendous, pile-driving fun,â€ says Kellvin Chavez. â€œAs a fan of wrestling, I used to watch ‘Santo, el Enmascarado de Plata’ one of the most famous Mexican free wrestlers, so I was excited by this project.â€

â€œWe are excited to work with Death Ray and Dark Horse on El Zombo as it furthers our goal of bringing Latino themes and Latino talent to the commercial market,â€ says Jose Martinez Jr. for Maya.Â  â€œWe plan to blow this out in a big way so that everyone can enjoy this awesome idea.

DEATH RAY FILMS is an entertainment production company founded by comic book & film industry veterans Chris Patton, Robert Sanchez and Kevin Munroe. The trio’s diverse backgrounds and extensive experience in all forms of media include: film, TV, Internet, comics and video games. And when combined, they form a giant robot.

MAYA ENTERTAINMENT, created by award winning producer Moctesuma Esparza, is a vertically integrated company and is the only production/distribution/exhibition entity in the United States, dedicated to the constantly growing US Latino Market. The Latino market represents the fastest-growing consumer segment in the U.S. and accordingly offers some of the most exciting growth opportunities for the entertainment industry today. Maya Entertainment is uniquely poised to become the first broad-based Latino-oriented filmed entertainment company.