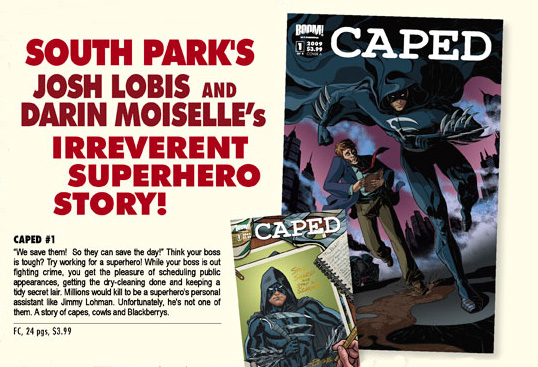 Los Angeles – January 26th, 2009 – Think your boss is tough? Try working for a superhero! A story of capes, cowls and Blackberrys, CAPED comes to you from the brains of SOUTH PARK writers Josh Lobis and Darin Moiselle, with art by Yair Herrera.

In CAPED, we meet Jimmy Lohman. Millions would kill to be a superhero’s personal assistant. Unfortunately, Jimmy’s not one of them. Down on his luck, and assisting a has-been hero, will anyone take Jimmy seriously when he uncovers the plot to kill off every superhero in town?

“Josh and Darin are some of the funniest guys I have met. And CAPED captures that completely. It’s a laugh out loud funny superhero story that every tights and spandex fan will love,” said BOOM! Studios Editor-in-Chief Mark Waid.

“First thing you should know is that CAPED is autobiographical.Â  We both had bosses who were jerks.Â  They hogged all the credit but passed on all the blame.Â  We wanted to tell a story about the unsung heroes and nowhere were those themes bigger – and funnier – than the superhero genre,”said CAPED co-writer Darin Moiselle.

CAPED features interior illustrations by Yair Herrera, known for his work on IDW’s ZOMBIES: ECLIPSE OF THE UNDEAD! and THE COMPLETE IDIOT’S GUIDE TO DRAWING SUPERHEROES AND VILLAINS.

“Sometimes we just need to make fun of superheroes!” said CAPED series editor Ian Brill.Â  “This is the series to do that.”