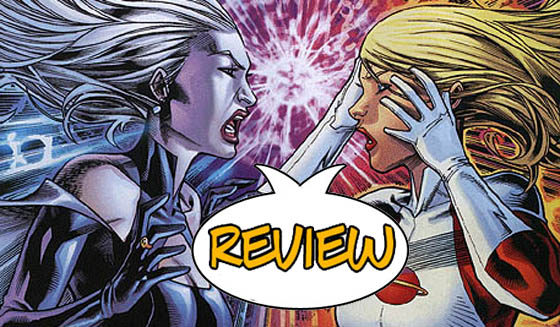 I Will Not Make A Kiss Me Joke.Â  I Will –Â  Wait, did I do that joke already?

Previously, on Legion of Super-Heroes:Â  The third incarnation of the Legion came as a

surprise to me, but it wasn’t unwelcome.Â  When Waid and Kitson rebooted the team with new costume designs and variations on a theme, it seemed like an interesting exercise.Â  Characters like Ultra Boy, Saturn Girl, Phantom and Triplicate Girls were given a new lease on life.Â  Then, eventually, Waid and Kitson left, and the team fell into the hands of old-school Legion writer Jim Shooter.Â  Shooter’s first act was to move the teams in directions that brought some of them back towards their pre-Crisis incarnations.Â  One character who has gone someplace different, though, is Princess Projectra, whose family has died, whose subjects have been destroyed, whose family fortune has gone away, and who is slowly going crazy, one two three four five six SWITCH!Â  One issue to go in the Threeboot, and we seem to have a traitor in the fold…

Projectra’s contiuing follies open the issue, as she continues her clandestine meetings with the remaining subject of Orando.Â  They’ve taken her beyond the usual seditious thoughts and minor actions to full-on combat training, and Jeckie shows that her powers have expanded as well as her physical prowess.Â  Back at Legion HQ, Phantom Girl brings her worries about the princess to Saturn Girl, in the hopes that Imra will be able to find out something about Projectra’s mental state, but S.G. has recently made a promise to never invade the thoughts of another Legionnaire.Â  Worst of all, Timber Wolf overhears Phantom Girl’s words, and smashes in, killing a perfectly innocent waiter-robot, and screaming “Mind your own florgin’ business!”Â  I hate the fake cursewords.Â  Hate ’em, hate ’em, hate ’em.Â  He continues with a big “Florg You” and stalks off, after which Saturn Girl confides that she did something stupid with Ultra Boy that has apparently ruined her life.Â

In the command center, Invisible Kid and Lightning Lad discuss the Alien Destroyers and the diplomats from “Intruder Planet,” explaining that both are nothing more than remote-controlled analog bodies, while Brainiac figures out that the Data-Ripper’s don’t destroy everything, so much as make virtual computer versions of anything that they shoot before eradicating the real versions.Â  More horrible dialogue occurs as Element Lad brings his new girlfriend to meet Ultra Boy, and she speaks the infuriating pidgin rhyming dialogue that Jim Shooter does so incessantly.Â  Brainy leads a clandestine team of Legionnaires on a spy mission to figure out what’s up with the planet, to the horror of Lightning Lad, who then goes to meet with the U.P. President, WHO PROCEEDS TO PUT THE MOVES ON HIM!Â  Back at headquarters, Projectra is confronted by Phantom Girl, but quickly kicks the hell out of her, and leaves her teammate in a pool of blood on the floor.Â  The team gathers and realizes that the attacker was certainly one of their own, and Saturn Girl pulls the information out of Phantom Girl’s brain that her assailant was Projectra.Â  Jeckie arrives, and overwhelms Saturn Girl’s brain with her new magical powers, causing Imra to believe that nobody attacked P.G.Â  Lightning Lad and Saturn Girl talk briefly, and almost make up when she reveals that what happened between her and Ultra Boy was all mental and not physical.Â  The issue ends with a distress call from the President, indicating that the U.P. is under attack!

This issue is weirdly paced throughout, with several big cliffhangers that I might have expected to be issue-enders crammed into place.Â  My assumption is that the schedule on the book might have been pushed up to get all the story in before the close comes next issue, but it makes this a choppy and disjointed read.Â  Francis Manapul’s art this issue is nicely done, especially the moment where Projectra reveals herself and takes out Saturn Girl, but it’s just not strong enough to deliver the goods with this much plot stuffed into the issue.Â  Shooter’s latest Legion run has been suffering from a case of the “Whatevers” for a couple of issues now, and this one tries to put a lot of bang in for your buck, but only succeeds in stacking the deck so high that it falls over.Â  Next issue will be the last for the current Threeboot Legion series, and while I’ll miss the great parts of the Threebooted team, these last few issues haven’t added much to the mythos.Â  Legion of Super-Heroes #49 earns a very disappointed 1.5 out of 5Â stars, though I’m still looking forward to finding out how the whole thing wraps up.