The quest for the 13 artifacts in the Top Cow Universe continues. Following the events of Broken Trinity come two new characters, two new stories and another chapter in the growing Witchblade saga.
Michael Finnegan wrestles with the power and purpose that comes with the Glacier Stone, and his first test might be saving Darkness wielder Jackie Estacado from himself. Hundreds of miles away, Glorianna Silver suffers from her banishment at the hands of The Angelus, and in order to survive, she will have to embrace the power of the Ember Stone and the destiny it has for her.

The astronauts aboard the International Space Station are beginning to realize that newcomers to the station might not be who they claim to be, and just might be up to something unimaginable. So when chilling screams start ringing through the ISS, the crew is horrified. Their horror turns to anger when theyâ€™re ordered to ignore the screams, and the stage is set for a violent confrontation in space where no one can come to their aid.

The momentous â€œWar of the Witchbladesâ€ story arc continues!
Events have been building to this storyline for two years, and by the time itâ€™s all over, everyone the Witchblade touches will be changed forever. The rift between wielders Sara Pezzini and Dani Baptiste deepens into all-out hostility. Meanwhile, the mysterious manipulator who has been pulling the strings in Sara and Daniâ€™s lives finally reveals himself, and chaos follows in his wake.

This set contains all the issues of the recently completed â€œCrown Heightsâ€ story arc. Collects Witchblade #120-124 â€“ including Cover B for #120 â€“Â at a discounted price.

This fresh, new take on the vampire mythos from International Horror Guild-nominated writer William Harms continues!
Victor learns the price for his miraculous recovery â€“ vampires can no longer kill him. Vlad demands Victorâ€™s eternal servitude as payment. In Washington, D.C., Lt. George Wagner and his men take refuge at the top of the Washington Monument, but things take a turn for the worst when one of Wagnerâ€™s own turns on him.

Weakened and battered after a conflict with The Darkness itself, Jackie Estacado flees Sierra MuÃ±oz and heads back to the States. But the road home is no easy journey as he runs afoul of Mexican witches, wannabe gangsters and even Aphrodite IV! Jackie soon discovers his battle with The Darkness cast his soul into Hell while leaving his body and mind on Earth. Enter The Sovereign, an arch-demon who promises to reunite Jackieâ€™s body and soul, but at a price that may be worse than Hell itself. Plus, witness a possible future ruled by The Darkness run amok in a spectacular story drawn by a list of all-star artists!
Collects The Darkness Vol. 3 #7-10 and the double-sized The Darkness #75 (essentially issue #11 before the Legacy Numbering took effect), plus a cover gallery and behind-the-scenes extras!

â€œBold, uncompromising and utterly thrilling. Under the skillful direction of Phil Hester, Michael Broussard and Jorge Lucas, The Darkness has risen to the top of my read pile.â€ â€“ Robert Kirkman (Walking Dead, Invincible)

Now that the voting is over and that two winners of Pilot Season 2008 have been announced, hereâ€™s your chance to take another look at all the candidates in one neat collection!
This star-studded volume features original stories and art by a cool mix of fresh newcomers and seasoned veterans, including Jonathan Hickman (Dark Reign), Jay Faerber (Dynamo 5), Kenneth Rocafort (Astonishing Tales), Marc Bernardin and Adam Freeman (Push), Joshua Hale Fialkov (Cyblade), Jeremy Haun (Chuck) and Jorge Molina (Superman/Batman).
Collects Pilot Season #1 issues of Alibi, The Core, Genius, Lady Pendragon, Twilight Guardian and Urban Myths and features a brand-new cover by Rocafort!

This half of this two-part cover by Tyler Kirkham and Stjepan Sejic features Sara Pezzini. Quantities are limited, allocations may occur.

This half of this two-part cover by Tyler Kirkham and Stjepan Sejic features Dani Baptiste. Quantities are limited, allocations may occur. 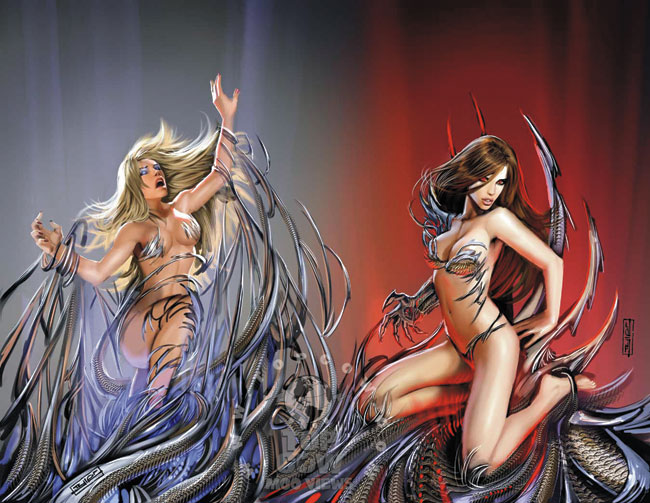 The only cover of this milestone issue thatâ€™s signed by the current Darkness creative team of Phil Hester and Michael Broussard!

Get this sexy variant signed by writer Paul Dini and cover artist Greg Horn! Quantities are limited, allocations may occur.