IDW set the stage with a kick-off issue, G.I. JOE #0, released in October, 2008, after it was announced that IDW had reached a deal with Hasbro to re-launch the G.I. JOE comic book franchise.

The first title IDW will release in January is G.I.JOE#1, written by Chuck Dixon and featuring art by Robert Atkins. This title follows G.I. JOE as it explores an all-new threat, a shadowy organization that was first introduced to the team in a #0 issue story. Dave Johnson (100 Bullets) will provide covers for the series, as will Robert Atkins.Â  Cover art variations are embedded in this press release.Â  The first issue features a special wraparound variant cover by superstar artist Gabriele Dellâ€™Otto (Secret War).

In February, IDW launches G.I. JOE: ORIGINS #1, a series that re-envisions the G.I. JOE team for a new generation.Â  Larry Hamaâ€™s unique blend of strong characterization and action storytelling, honed over decades of writing these characters, to effective use in looking at the formations of the G.I. JOE organization and just who the characters on the team really are. Hama will be joined on this series by artist Tom Feister (Ex Machina). Each issue will come with two regular covers, one by Andrea Di Vito and one by Feister himself.

Finally, launching in March, G.I. JOE: COBRA #1, kicks off a four-part miniseries written by Christos Gage and Mike Costa, with art by Antonio Fuso, and covers by Howard Chaykin (American Flagg) and Fuso. This series provides a unique look at the new status quo for the primary threat in the G.I. JOE universe. The series views the sinister COBRA organization from a ground-floor view as a familiar G.I. JOE team member seeks to infiltrate Cobra and learn their inner workings. 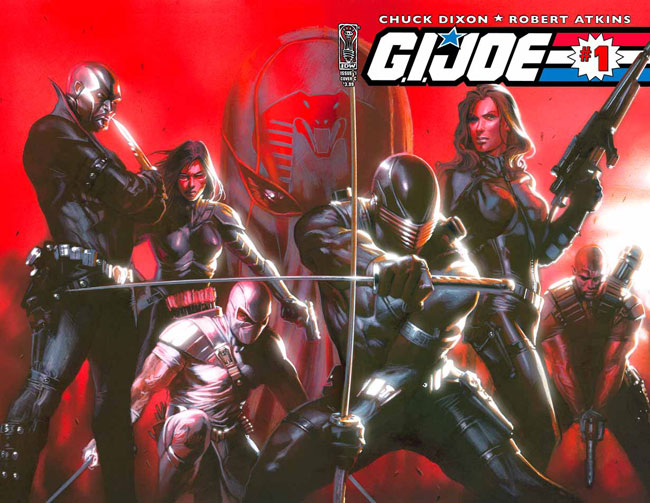