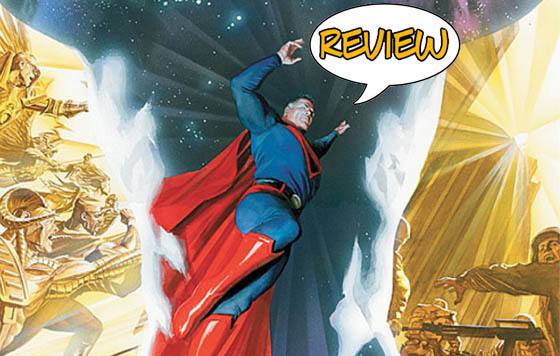 What DOES God need with a starship?

Previously, on Justice Society of America:Â  The Justice Society has seen the coming of the last of the beings of the Third World, the monstrous horned creature known as Gog.Â  Healing the sick, curing the infirm, destroying evil, bringing life to the deserts of Africa, Gog has pretty much been an all-around miracle worker.Â  But, when all his cures, all his healing, all his goodwill is finally revealed, he asks for the one thing that the JSA won’t provide: worship.Â  When they refuse his command, Gog proves the worst expectations of the Flash to be completely true, reversing all his miracles, indeed causing additional damage.Â  Starman’s mind, Damage’s face, Doctor Mid-Nite’s eyes, all bear the wrath of the angry Gog.Â  But, there’s still one ace in their hand, in the form of one Kal-El of Krypton, late of Earth-22…Â  Can the Man of Tomorrow turn the tide against the deity of yesteryear?

Seconds after last issue ended, we open with a close look at Superman (the Kingdom Come version) assessing the current threat level that he faces.Â  God is preparing to take back the gift he has given Lance Corporal David Reid, (aka Magog) a gift that pulled Reid from the brink of death.Â  Before he can react, though, Green Lantern, the Thunderbolt, and the most powerful JSAers try to restrain him with green flame and pure muscle.Â  They slow the giant down, just for a moment, long enough for Damage to wade in and explode with his full power.Â  The resulting explosion lcreates a mushroom cloud visible for miles, but when the smoke clears, Gog speaks.Â  “You are insignificant,” intones the monster, and Citizen Steel steps forward to take HIS shot.Â  A punch in the ankle (?) manages to drop Gog (!) and the team quickly ties him down again.Â  Gog screams that he is the savior of humanity, but Magog snorts.Â  “You’re a parasite looking for a host.”

With the whole team holding him down, Superman steps in, and quickly RIPS OFF GOG”S ENTIRE #$*!ING HEAD!Â Â  That is hardcore…Â  Superman and Starman quickly take off, with the former Legionnaire creating a space portal to the edge of the galaxy.Â  Superman sticks Gog’d head to the Source Wall (where the other Third World beings currently reside, eternally entombed in stone.)Â  Before he succumbs, though, Gog reminds Superman that he has abandoned his world, leaving his friends behind to die.Â  Starman once again opens a space warp, allowing Kal to step through to the moment after the bomb went off at the end of Kingdom Come, leaving him again in a field of dust and human remains.Â  Once again, he races to the U.N. and threatens to kill everyone, while the Justice Society members ponder why David Reid is still Magog…Â  While Norman McKay tries to talk Superman down, Judomaster seeks out Damage, once again horribly scarred, but she stops him, and kisses him.Â  Citizen Steel finds that his sense of touch is once again gone, and we leave our JSA, returning to Earth 22.Â  The story turns Earth 22, as Wonder Woman flies down to give Clark Kent his glasses back, indicating that they should help him “see more clearly.”Â  We see scenes of Superman’s life, aging, raising a family, the death of Batman, travelling further and further into the future, until we reach a day, 1000 years in the future.Â  The Legion of Super-Heroes flies past, as an elderly Clark Kent smiles and looks on.

Twelve issues ago, we saw Superman arrive in the lives of the JSA.Â  Twelve issues during which we saw characters introduced, many of whom got little to no face time, in favor of Gog, Superman, and the coming apocalypse.Â  Now that it’s all over, the point of it all seems to have been a little hero worship for the Big Red S, and it falls a tiny bit flat for me.Â  It’s nice to see Alex Ross doing what he does best (that’s paint, by the way) instead of co-plotting, something I’ve never found to be a strength.Â  I’m pretty glad that this seemingly endless jaunt into Kingdom Come is finally over, but I”m not sure what we’ve accomplished.Â  I like the introduction of the Judomaster/Damage relationship, but I have no idea what’s going on with her.Â  I like seeing Cyclone, Citizen Steel, and Amazing Man in action, but still haven’t got a good handle on who they’re supposed to actually BE, the characters within the costume designs.Â  Overall, this sequel has been less than satisfying, and the same goes for this issue.Â  If a problem can be easily decapitated by Superman, the question of why it was a problem for that long easily arises.Â  Justice Society of America #22 earns a relieved/disappointed 2 out of 5 stars.Â  Next issue:Â Â  Black Adam!