Is Promethea Getting Absolute Treatment

By Stephen Schleicher on January 8, 2009 6 Comments 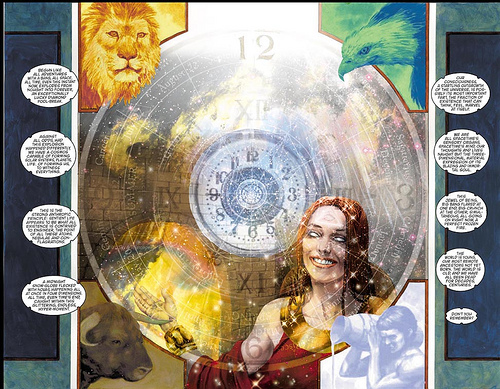 It just might be the case if you read between the words and spaces in a very vague JH Williams III post on his blog.

Going through some Promethea files for reasons that will be made clear in a later post and thought I would put of some these into blogs.

For those not familiar with the series – to the Wiki!

Serialized in 32 issues on an irregular schedule from 1999 to 2005, the series explores Alan Moore’s ideas about art and magic, combining elements of superhero action, metaphysical theorizing, and psychedelic revelation, all focused on the adventures of Promethea, a metafictional character that possesses magical power over the real world. Promethea is also notable for wide-ranging experimentation in visual style and storytelling technique on the part of Williams and Moore.

Lately I’ve fallen in love with these omnibus and Absolue Editions being put out by companies.Â  I fell in love with Sandman only after the first Absolute Edition was released, and have been keeping my eyes open for other series to receive the same treatment.