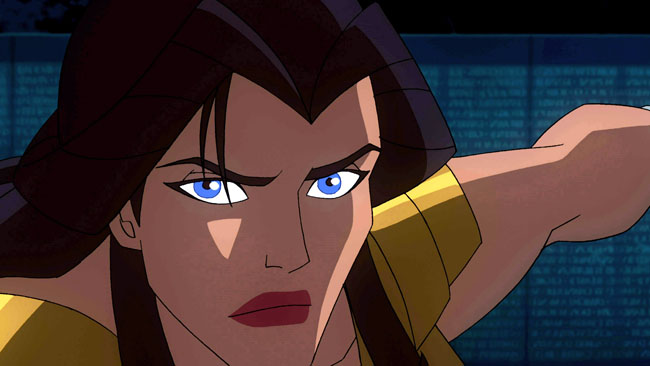 Academy Award nominee Virginia Madsen brings an impassioned, stately voice to the role of Hippolyta, Queen of the Amazons, for â€œWonder Woman,â€ the next entry in the popular series of DC Universe animated original PG-13 movies.

Warner Premiere, DC Comics and Warner Bros. Animation are set to release the all-new film on March 3, 2009, distributed by Warner Home Video. The animated original movie will also be available OnDemand and Pay-Per-View as well as available for download day and date, March 3, 2009.

Madsen has moved seamlessly through all genres of performance â€“ from mainstream feature films and independent releases to primetime television and animated films/series.Â  No category is beyond her scope â€“ and the fanboy realm has a prominent place on her IMDB roll call.

Madsen made a splash in one of her first films as Princess Irulan in â€œDune,â€ then forever endeared herself to the horror fandom as Helen Lyle in â€œCandymanâ€ (for which she won the 1992 Saturn Award in the Best Actress category). She has made guest starring appearances on â€œStar Trek: Voyagerâ€ and â€œEarth 2,â€ helped Christopher Lambert return in â€œHighlander II: The Quickeningâ€ and done notable work in super hero animation. Madsen voiced Dr. Sarah Corwin and Roulette in four episodes of â€œJustice Leagueâ€ and Arella in an episode of â€œTeen Titans,â€ as well as a two-episode turn as Silver Sable in â€œSpider-Man.â€

Along the way, sheâ€™s starred opposite Harrison Ford, Meryl Streep, James Coburn, Jim Carrey, Billy Bob Thornton, Matt Damon, Alec Baldwin, James Woods and Whoopi Goldberg in dramatic feature films like â€œGhosts of Mississippi,â€ â€œThe Rainmakerâ€ and â€œFirewall.â€ Sheâ€™s also been recognized with an ongoing string of awards and nominations for her work in independent films like â€œGothamâ€ and â€œArtworksâ€

And of course, Madsen is best known for earning a 2005 Academy Award nomination as Best Performance by an Actress in a Supporting Role for â€œSideways.â€

At the urging of an acting coach, Madsen actually began performing voiceovers when she was pregnant with her now-14-year-old son. She was able to find time in her single-mother/busy-actress life to discuss subjects ranging from her secret desire to play Batman and the reading lessons inherent to comic books to working as a waitress at the same Evanston, Illinois restaurant as â€œWonder Womanâ€ co-star Marg Helgenberger.

All hail the Q&A with the queen … Virginia Madsen.

QUESTION: Did you prepare for voicing the Queen of the Amazons in any special way?

VIRGINIA MADSEN: Well, I prepared this morning by writing several edicts for my son (laughs). Honestly, I love when I get to play these characters that are bigger than life. There are roles in animation that I never get to do in real life â€“ and it appeals to my ego as an actor to play the Queen of Everything (laughs) Hey, Iâ€™m honest. I admit it.

Hippolyta has a really wide range â€“ I use a lot of notes when I play her. She has a larger, more regal voice. I liked the range we use to create her vocally, and the way that she was written. Itâ€™s not that sheâ€™s over the top, but sheâ€™s just a very, very big character.Â  And I donâ€™t usually get to do that on onscreen.

QUESTION: Is that part of the allure of voice acting for you â€“ to gain satisfaction in performances that you donâ€™t find on camera?

VIRGINIA MADSEN: Voiceover work reminds me of old-time radio.Â  When I was little I used to sneak and stay up at night and listen to Mystery Radio Theater â€“ I loved all those old radio plays.Â  A radio play actually ended up being the first acting job I ever had. A lot of times when Iâ€™m on camera, Iâ€™m playing characters that are more like myself, and I donâ€™t get to do a lot of real character work.Â  But when youâ€™re doing animation, you are the very epitome of colorful characters. I think Iâ€™m just really into make believe. In animation, thereâ€™s silly things I get to do with my voice. I get to have a wider range, so my voice gets to dance more than it does on camera. So itâ€™s almost like I get to be more theatrical when I work in voiceover. 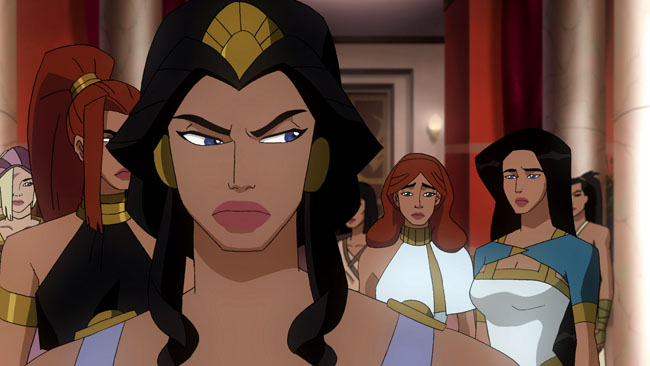 QUESTION: Youâ€™re voicing the Queen of the Amazons, but sheâ€™s also the mother of Diana/Wonder Woman. Did your standing as a single mother of a 14-year-old son influence your taking the role or your performance?

VIRGINIA MADSEN: Well, I am a proud mother â€“ thatâ€™s another reason I love doing any kind of animation. When my son was growing up, if he was watching something animated and I was in it, that was way cooler to him than seeing me in a movie.

Hippolyta is very protective, and she thinks she knows it all, and I do as a mother in real life know it all (laughs).Â  And if my son would only listen to my advice, he would lead a perfect life (laughs harder). Iâ€™ll still be saying that to him when Iâ€™m 75. I like to imagine that I have the control that Hippolyta does, but heâ€™s a teenager, so that never really happens (laughs).

QUESTION: This is a blockbuster voice cast â€“ any thoughts on your co-stars?

VIRGINIA MADSEN: Actually, Marg Helgenberger and I were waitresses in the same restaurant in Evanston, Illinois. Iâ€™m happy to say that that restaurant has since been torn down.Â  But Marg made it out first.Â  We both had an audition for ABC soaps â€“ different soaps, but we auditioned at the same time, and she got the part and went off to New York. Three years later, I went to L.A. So she was kind of an inspiration to me.Â  And it makes sense that we will both be in Wonder Woman together, because we ARE Wonder Women (laughs).

I love Keri Russell. I watched every episode of Felicity, and Waitress is my favorite film from last year. Sheâ€™s just an amazing actress.Â  And I like her voice a lot â€“ it didnâ€™t surprise me that she would be doing voiceover work. 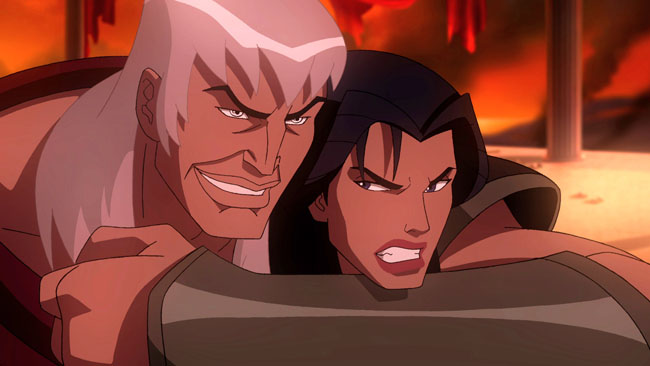 QUESTION: Youâ€™ve got some notable experience in the sci-fi/fanboy world. Do you seek out these projects?

VIRGINIA MADSEN: I think it seems to find me, and that might be because Iâ€™m a fan. I would have been a fan of â€œCandymanâ€ even if I hadnâ€™t been in that movie.Â  Iâ€™m a huge fan of â€œStar Trek,â€ which is why I was in â€œStar Trek: Voyagerâ€ â€“ because I begged them to be a part of that lore. I was always an actress, even as a little kid, and fantasy, horror, sci-fi stories are really all about playing make believe. I just never grew out of that.

QUESTION: â€œDuneâ€ was released 25 years ago. Do you have any specific memories?

VIRGINIA MADSEN: That was really my first Hollywood job. It was such a small part, but I opened the movie. I was about 19 years old and I had to make this speech, and I didnâ€™t understand most of the words because they were, you know, words from â€œDune.â€Â  They were made up names that I didnâ€™t know how to pronounce, but I knew how I should sound because I was a sci-fi fan myself. I hadnâ€™t read the book, but I knew that I was the princess of the universe. I went in and sort of made her up, and David Lynch thought it matched and cast me.

VIRGINIA MADSEN: I was not a comic book reader, but my son is. My son wasnâ€™t really interested in reading books, which was hard for me because I love to read.Â  It just didnâ€™t come naturally to my boy.Â  So we kind of found comic books because they were fascinating to him. They were great stories. Of course, I have to read them all first, because now when you get into graphic novels, they are definitely in deep graphic.Â  But the stories and the characters really interest him, so comic books kind of taught him how to read.Â  So weâ€™re really into comic books. 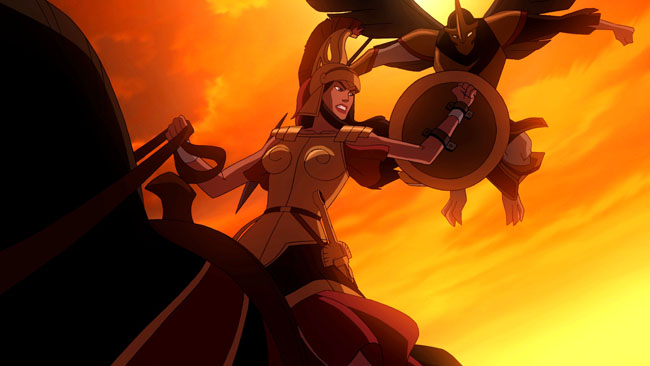 QUESTION: Is there a comic book role that your inner geek covets?

VIRGINIA MADSEN: Sadly, I really want to be Batman â€¦ and I just never will be (laughs). Thatâ€™s the cross I bear. When I was growing up, the really, really cool super heroes were all male â€“ so I wanted to be them. I really didnâ€™t like Batgirl.Â  I was like, â€œNo, if Iâ€™m not gonna be Batman, Iâ€™m not gonna play.â€ Maybe they could write an evil female super villain who takes over Batman, and nobody knows.Â  Then I could live my dream (laughs). I think thatâ€™s a good idea.