Review: Indiana Jones and the Tomb of the Gods #3

By Stephen Schleicher on January 2, 2009 0 Comments

Why Dr. Jones, where have you been? 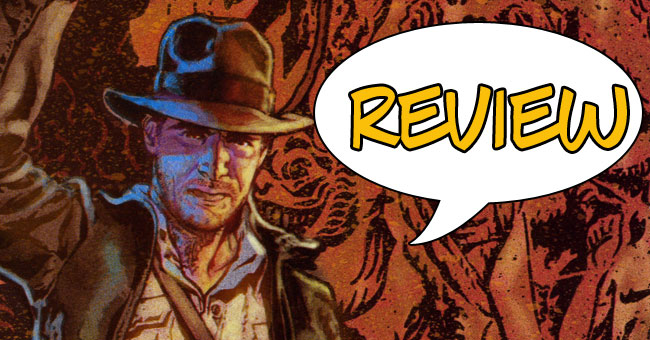 I canâ€™t tell you when the last issue of Indiana Jones and the Tomb of the Gods was released, but it was long enough ago for me to look at this issue and say, â€œHello there, what do we have here?â€

Regardless of the last release, a quick smack to the head had me remembering this tale of Indiana Jones battling Naziâ€™s for the three parts of a key that lead to the resting place of the Gods.Â  I also seem to remember the lovely Janice betraying her portion of the key for a tidy Nazi pay-off and how Jones and Janice both ended up in the middle of the ocean on an overturned boat surrounded by sharks.

If you like classic Indiana Jones where heâ€™s able to woo the women and make demands on them that seem suggestive in nature, but is really Jones trying save their butts, then the whole opening act of the issue is for you.Â  Jones asks Janice to remove her shirt, not so they can get it on before they die from shark attacks (which almost happens later), but to light a fire to signal any aircraft or ships in the area.

The expected cheesecake moment doesnâ€™t happen in this scene, and just when a Steven Spielberg great white shark breaks the lifeboat to pieces, along comes Marcus Brody to save the day.

Janice is thrown in the brig for be a Nazi collaborator, but it is later revealed she did make a copy of her piece of the key (Jones did the same thing), so the whaler is able to make landfall, and a quick dog sled scene later, finds Jones and company catching up to Malberg and his ilk as they approach the mapâ€™s final destination.

There is a lot of witty dialogue in this issue and Rob Williams is able to channel the spirit of Indiana Jones in a way that makes all the characters believable.Â  There are also great moments that harken back to the original trilogy that set this tale up to be a grand adventure.Â  Unfortunately, the spirit of Indiana Jones also brings with it some weird moments that feel like they were borrowed from Kingdom of the Crystal Skulls.Â  While the truck chase scene from Raiders of the Lost Ark is my favorite movie moment of all time, the dog sled chase and gun fight in the final act of this issue, reminds me a lot of Shia Labeouf swashbuckling it out on the top of a jeep.

I probably didnâ€™t need to read this issue on the super slick paper Dark Horse opted to use to print this issue, but the paper does bring out the great art and colors by Steve Scott and Michael Atiyeh.Â  Everything just pops, and I like that a lot in my popcorn movie comic book – everything needs to look nice and slick just like the movies.

By issues end, when the cliffhanger ending (literally) is reached, the only thing I can think is this issue read way to quickly.Â  Much like the very short chapter installments of the Saturday morning serials, this issue has me wanting the next installment.Â  I just hope I donâ€™t have to wait until March to read it.Â  Indiana Jones and the Tomb of the Gods #3 earns 3 out of 5 Stars.