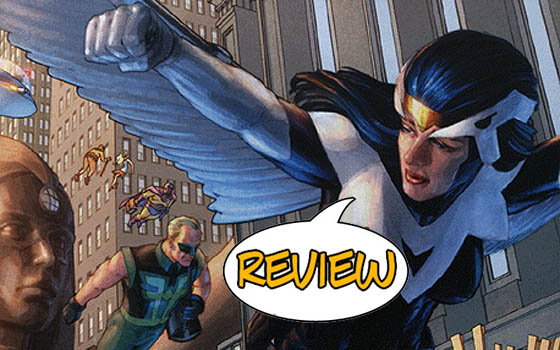 America’s Best Comics is one of my most-missed of the early 00’s comic companies, as Alan Moore and company delivered month after month, giving us creative takes on superhero tales, drawing as much from pulps and television as from comic history.Â  Top 10 was, arguably, the most successful of the various offerings, so it’s good to see original creators Xander Cannon and Gene Ha back in the saddle with the characters of Neopolis’ Tenth Precinct…Â  But, can lightning strike into that same bottle again?

Previously, on Top 10 – Season Two:Â  The police officers of Neopolis never seem to have it easy.Â  A mysterious killer managed to dump over a dozen vicitims in the fountain in front of Precinct 10 within the spaceÂ of seconds, leaving little to no evidence of who or how.Â  The new commissioner has instituted new policies forcing all cops to wear regulation uniforms and carry regulation weaponry (even if your powers come from the weapons or uniform.)Â  Their dead friend Girl One has been essentially cloned into a new form, and the newly created Girl Two.Â  And Detective Peregrine has discovered that her husband, Top Flight, is a “crossover dresser,” with a second superhuman identity…Â Â  With personal, professional, and legal issues pressing, things at Neopolis P.D. ain’t getting any easier any time soon.Â  Does this mean that this year’s barbecue is cancelled?

This issue starts in an odd way with Detective Peregrine and her husband saying their farewells as he sets off on his weekend with “Premise Keepers,” the self help cult that promises to help him with his crossover dressers.Â  She asks Officer Hurricane what the car will look like, and her husband angrily rebukes her for talking out of school.Â  At the same time, Dust Devil and Shock-Headed Peter continue to investigate the murders that are, ostensibly, our A-plot.Â  The newly minted Girl Two has been paired up with the ever-awesome Joe Pi, and is having serious trouble trying to deal with the stresses of being a cop in Neopolis (she is emotionally only two, after all.)Â  Joe offers her a friendly shoulder, and advises that she may want to consider being a bit more cautious with her emotions.

Elsewhere in the universe, Hurricane and Top-Flight arrive on their “Origin Weekend,” only to find that the mind behind it all, James Eternity, may not be the paragon that he seems to be, with a little more P.T. Barnum than Stephen Covey.Â  Pete and Dust Devil continue their investigations, leading to a strange man who keeps giving kids magic words, and barely manage to escape a fight with their lives, thanks to a handy ice pistol.Â  Top-Flight realizes that the Origin Weekend is a sham, and refuses to buy into it all, while Girl Two is nearly taken down by a couple of magical schmucks before Joe steps in to save the day.Â  The whole issue ends with Top-Flight having his mind swapped with a mysterious goon in a crystal, who then returns home to find that “his” wife is pregnant…Â  Dum dum DAAAAH!!!

Okay, here’s the bad news:Â  There is very little in the way of focus in this issue, jumping back and forth from one bit to another.Â  Although this has always been the way Top 10 stories go (it’s a ‘Hill Street Blues’ ensemble cast, after all) but this issue, and to a lesser degree, this limited series, has a real problem with bouncing back and forth from bit to bit.Â  Gene Ha’s art is exquisite throughout, giving us a look at what superhumans might be like in an actually realistic setting, but given that this is #3 out of 4 issues, I can’t fathom how next issue is going to be anything more than a desperate race to wrap up all the plotlines in a big hurry.Â  While I was disappointed in the pacing, the actual content of the issue wasn’t bad at all, but the focus on Peregrine’s husband over the regular cast felt a bit forced.Â  Stil and alll, Top 10: Season Two #3 ranks 2 out of 5 stars, making me wonder if even most of the original creators can overcome the loss of Alan Moore’s writing…