Or – “Hal Jordan Called…Â  He Wants His Schtick Back…” 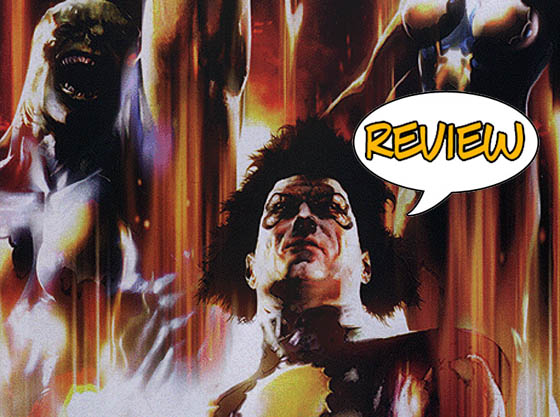 Previously, on Nova:Â  After the various Annihilation wars, Phalanx covenants, and a lengthy stint as a Locutus of Borg, Richard Rider, Nova Prime, was ambushed by a group of super-Skrulls, intent on taking a powerful player out of the way in order to more easily conquer Earth.Â  The pointy-eared geeks were undermined by K’lrt, the original Super-Skrull, who faked Nova’s death using his invisibility powers.Â  Presumed dead, Nova was able to return to Earth unsuspected, only to find his home planet under green-wrinkly-chinned siege.Â  Seeking out his parents, Nova finds that his brother has become a scientist at Project PEGASUS, and heads there only to find the base under Skrull siege.Â  With the help of Darkhawk (now security head of the Project) and the miraculous return of Wendell Vaughn (the original Quasar) he manages to hold off the Skrulls, has the computerized Worldmind of Xandar removed from his body, and ends up completely outgunned by Skrulls…Â  until the arrival of a cadre of Nova Centurions saves the day…

We pick up this issue an unspecified length of time after last, with news reports of a mysterious compound in Ohio, where the Serpent Society and their families are pulling a Waco.Â  Apparently, the possibility that Skrulls could be anywhere has imbalanced Sidewinder and company into locking themselves and their families away from possible attack.Â  Enter the Nova Corps!Â  Richard and his squadron move in at supersonic speed, and quickly engage the enemy.Â  He profiles each of the new recruits as we go, including a Shi’ar warrior; a Rigellian with a brain like a computer; Qubit, an artificial life form; a Mephistoid (like Mam’zelle Hepzibah from the Starjammers) and Fraktur, a member of a reptilian alien race looking for her cousin, who came to Earth years before.Â  “She tells me her cousin’s name is Fin Fang Foom…”Â  They quickly take down the Serpent, and treat the assembled masses to a movie-quality Bad Ass Power Walk from the compound before doing a quick interview.Â  “The Nova Corps has been protecting friendly worlds for generations,” says Richie before taking off.Â  The interview is witnessed by his parents, his former partner Justice (once Marvel Boy of the New Warriors) and his litlte brother Robbie, who has some jealousy issues going on.Â

Robbie and Darkhawk have a cute moment where the two of them both won’t admit that they’re jealous of Nova, when the entire team returns back to the Project.Â  Nova takes a moment to talk with the Worldmind about why it didn’t tell him that it had been recruiting Nova Corpsmen, and Worldmind is charateristically blunt.Â  “You are perhaps the finest Nova Centurion ever, save for one aspect.Â  Your obedience.”Â  Worldmind indicates that it HAD to act, to try and protect the universe from threats like the Phalanx and Annihilus.Â  Richard asks that it not create any more centurions, and Worldmind simply answers “I heard you.”Â  It informs him that it will NOT be taking up residence in his mind again, indicating that his sanity would suffer in the long term, but before Nova can argue, he’s pulled back into action.Â  He and his centurions take down Taboo, a giant monster from the days before Marvel did superheroes, and they make short work of the creature.Â  Returning to Project PEGASUS, Nova finds Darkhawk, who immediately tells him “I had nothing to do with it.”Â  He enters the facility to find EVERYONE turned into a Nova Centurion, including his own baby brother.Â  “Hey, Rich,” says Robbie.Â  “Look what *I* got!”

This was a really good issue, fleshing out Richard’s personality as a leader, rather than the last standard-bearer of the Nova force.Â  We find that Worldmind has agendas of it’s own, that Robbie really is a little jealous, and even see how cool a universal force of Nova Corpsmen could be.Â  Dan Abnett and Andy Lanning are known for their ability to do space opera, but here they manage to pull off the kind of earth-bound drama that Mark Gruenwald used to do so effortlessly in Quasar years ago.Â  Willingont Alves and Geraldo Borges are said to share the pencilling chores this issue, and their work looks really good, showing the Human Rocket and his inhuman partners in action most of the issue, while still differentiating them in body language and the expressions on the visible portions of their faces.Â  I’m really enjoying Nova these last few issues, as it manages to work the Secret Invasion in without having it take over the entire book ala New Avengers, and making the charater the point of the story rather than just a means to an end.Â  Nova #19 earns 4 out of 5 stars, with nice art, a tight plot, a swerve at the end, and even some nice dialogue between Robbie and Darkhawk…Â  This book is one of Marvel’s best right now, and it’s nice to see creators working the crossover into the plot rather than working the plot around the crossovers.