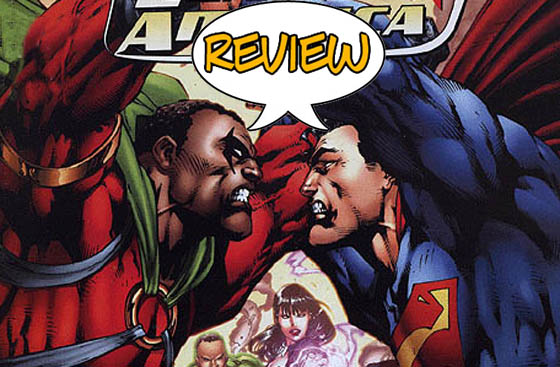 Previously, on Justice League of America:Â

Banded together from remote galaxies, (or at least from Detroit, St. Roch, Suicide Slum, and points west) the comprise the one group who dares to challenge the intergalactic threats…Â

THE JUSTICE LEAGUE OF AMERICA!

We open with Kimyo Hoshi (Doctor Light II, now able to use her name again since the rapist original bearer of the sobriquet has been melted) angrily screeching at her STAR labs coworkers in Japanese.Â  Of course, they don’t actually speak Japanese, which kind of halts the comprehension factor somewhat.Â  She laments the loss of her powers, the fact that she had to move to America to find work, the fact that she’s quit two jobs already and is nearly done with her current one.Â  “But every once in a while, I do think about flying,” she thinks, entering her apartment to find… a roomful of superhumans.Â  “We need a moment of your time,” says Iron Butterfly the leader of the Shadow Cabinet.Â  Regular Cabineteers Starlight, Payback, Iota, Donner and Blitzen (who, by the way, look pretty good under Ed Benes’ pen) as well as Milestone headliner Hardware and general weirdos Twilight and Gloria Mundi are gathered in her living room, making me wonder what’s so special about her…Â Â  Elsewhere, Hawkgirl dreams of floating through the clouds naked, mating with her multiple reincarnated love Hawkman, and moans his name in her sleep.Â  This normally wouldn’t be a problem, except for the fact that her bed partner, Red Arrow (ugh) hears her and gets a little bit snippy.Â  She tries to apologize, but he isn’t hearing her.Â  “You can’t hurt me, Kendra.Â  I’m a superhero.”Â  I guess my friend who points out that ‘Red Arrow’ could be a euphmism for ‘prick’ has a point, there.Â

While the best couple in the DCU starts to split up, Vixen and Animal Man share a bonding moment with her newly restored bio-mimicry powers.Â  Black Canary analyzes the situation, declares her fit for duty, offers him a place on the team (he declines) and sets off to deal with another “personnel issue.”Â  Back at Casa Hoshi, the Shadow Cabinet ends up having to fight Doctor Light, and almost loses until Hardware makes a desperation move.Â  But it’s too late, she’s already triggered her old JLI communicator…Â  That’s probably bad.Â  Back at the JLA Headquarters, the Big Three return to their hidden lounge where they hide and talk smack behind the team’s back, only to find their leader present.Â  “Oh, look!” says Black Canary.Â  “It’s Superman, Wonder Woman and Batman!Â  The greatest superheroes ever!”Â  She chides them all for undermining her authority, and offers her resignation as leader unless they stop with the Star Chamber bull$#!+.Â  “A car can only have one driver.Â  If it’s me, keep your damned hands off the wheel!”Â  Niiiice…Â  Before they can respond, though, an emergency call comes in (from Doctor Hoshi) and the team arrives to find everything seemingly okay, with the kids playing PS2 with “Kevin” the babysitter (who asks hilariously of Black Lightning, “are you Static’s father?”) while a hologram of Doctor Light says everything’s okay.Â Â  Batman quickly figures it all out, and finds that they’re faced with Payback and Starlight.Â  Back at their own headquarters, Iota and Hardware break in, only to find the Justice League awaiting them.Â  It would seem that they’re way outnumbered, until Iota quickly enlarges something from her pockets.Â  The rest of the Shadow Cabinet appears, along with the long-missing Icon.Â  “Allow us to pass,” says Icon, “or I cannot guarantee your safety.”

It’s an interesting issue, mostly setup, but it’s nice to see the long lost Milestone heroes in action again.Â  Of the multiple universes launched in the early 90’s by comics companies intent on dethroing Marvel, theirs was one of the most engrossing and versatile, as well as realistic.Â  I reserve judgement on how successful this revival is going to be, but this issue did set up several plotlines that I’m interested in, as well as finally putting the lie to the whole “Clark, Diana, and Bruce ARE the Justice League!” stupidity that so many people (including Brad Meltzer) seem to have fallen for over the last few years.Â  Ed Benes does a better job that usual on art, giving us more detail, more backgrounds, and more facial expression that I’m used to, and the Shadow Cabinet members don’t suffer for badass moments.Â  I’m expecting a smackdown next issue, but I hope to see more than the standard-issue misunderstanding battle.Â  Dwayne McDuffie has been doing good things with the League, and was an architect of the original Milestone universe, so I figure that at least the ride will be worth it.Â  Justice League of America #27 earns 3.5 out of 5 stars, andÂ a wish for an ongoing Donner and Blitzen series…Â Â  Sigh..Â  Donnnnnerrrrr.