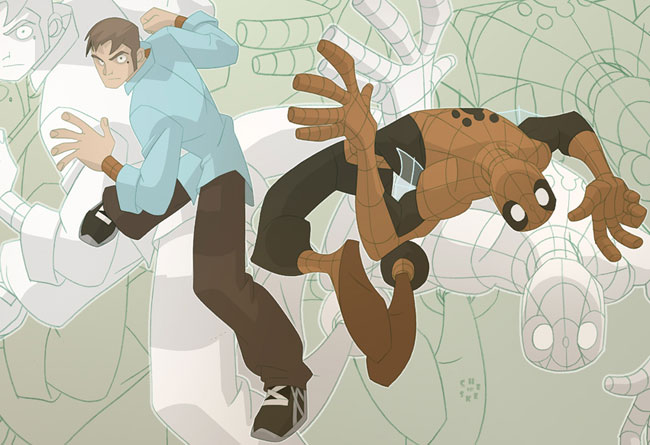 Marvel Animation has posted the episode rundown and descriptions for the upcoming second season of The Spectacular Spider-Man.Â  There was a huge amount of buzz over season one (we even reviewed it on the Major Spoilers Podcast), and season two looks even better.

Canadians get to see the new episodes in January, while us ‘mericans have to wait until March.Â  And no, Gwen Stacy doesn’t die this season.

14 â€“ Blueprints
Itâ€™s early December, and the first snow is falling. PETER PARKER has a long â€œTo Doâ€ list â€“ leading off with talking to GWEN STACY about their surprise first kiss. But before he gets the chance, SPIDER-MAN has a run in with the sorcerer MYSTERIO.

15 – Destructive Testing
Both GWEN STACY and LIZ ALLAN like PETER PARKER. So whom should Pete pursue? Meanwhile, KRAVEN THE HUNTER has come to New York to make SPIDER-MAN his prey!

16 – Reinforcement
As Christmas approaches, the SINISTER SIX reconstitutes with SANDMAN, RHINO, VULTURE, ELECTRO and new members MYSTERIO and KRAVEN. All they want for Christmas is SPIDER-MAN â€“ dead. Meanwhile, PETER PARKER finds his wandering eye prevents him from being with GWEN STACY. Heâ€™ll have to learn to focus if he wants to get the girlâ€¦ and if he wants to stay alive.

17 – Shear Strength
Itâ€™s New Yearâ€™s Eve, and all is not right with world. The MASTER PLANNER and his henchmen are literally planning to take over the world! A highly motivated SPIDER-MAN takes the fight to the Plannerâ€™s secret lair. But once he gets there, can he survive?

18 – First Steps
Schoolâ€™s back in session, and things have changed. PETER PARKERâ€™s actually invited to FLASH THOMPSONâ€™s birthday bash. Meanwhile, SPIDER-MAN has to party with SANDMAN, whoâ€™s once again looking to make his Big Score. And is that VENOM disappearing into the night?

20 – Identity Crisis
PETER PARKERâ€™s secret identity as SPIDER-MAN has been outted by VENOM, leaving Pete and his loved ones vulnerable to all of Spideyâ€™s enemies.

21 – Accomplices
A gang war looms as SILVER SABLE, HAMMERHEAD and DOCTOR OCTOPUS vie for a prize that could change the balance of power in the New York Underworldâ€¦

22 – Probable Cause
Some days, PETER PARKER just canâ€™t winâ€¦ especially when he winds up on a MIDTOWN HIGH police car ride-along with SALLY AVRIL. As SPIDER-MAN, his luck isnâ€™t any better, facing off against SHOCKER, RICOCHET and OX, i.e. the NEW ENFORCERS.

23 – Gangland
On Valentineâ€™s Day, PETER PARKER jeopardizes his relationship with girlfriend LIZ ALLAN, when TOMBSTONE , DOCTOR OCTOPUS and SILVERMANE call a Valentineâ€™s Day Summit . But when HAMMERHEAD betrays them all in an attempt to become the new Big Man, the summit erupts into a gang war â€“ one only SPIDER-MAN can stop!

24 – Subtext
Determined to be a better boyfriend to LIZ ALLAN, PETER PARKER wishes he could help her brother MARK ALLAN. But when GREEN GOBLIN blackmails Mark into doing his bidding, neither Liz, MARY JANE WATSON nor SPIDER-MAN may be able to save him!

25 – Opening Night
To test security at the VAULT, SPIDER-MAN volunteers to try to escape. But the GREEN GOBLIN has other ideas, trapping Spidey inside RYKERâ€™S amid a sea of felons he put away.

26 – Final Curtain
When PETER PARKER breaks up with LIZ ALLAN to finally be with GWEN STACY, nothing goes as planned. Likewise for SPIDER-MAN, who finally unmasks the GREEN GOBLIN, revealing him to be–No, wait! Stop! I promise I wonâ€™t tell a soul!