Or – “The Grand Old Tradition Returns!” 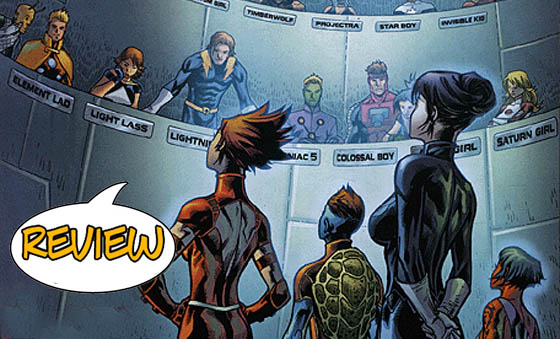 Previously, on Legion of Super-Heroes:Â  The Legionnaires have been running full tilt for months now, racing from crisis to crisis, personal, professional, heroic and otherwise.Â  Brainiac 5 has been cavorting with ghosts, Princess Projectra has chosen some poor pals, Invisible Kid has a crush, and Lightning Lad has finally found a way to make the mantle of leadership fit.Â  Of course, his girlfriend Saturn Girl isn’t his girlfriend anymore, after a dalliance with Ultra Boy, and their membership has been stretched to the limit fighting off an invader planet and strange alien menaces.Â  Having finally (or at least temporarily) mended fences with the ruling class of the United Planets, the Legionnaires are prepared for the most terrifying moment that any Kid, Lad, or Lass ever faces:Â  the moment when prospective heroes stand before them and show off their powers (or the lack thereof) in the hopes of making the big leagues…Â  Legionnaire Tryouts.

We open with a U.P. delegation meeting with representatives of the Invader Planet that nearly destroyed our entire solar system (a situation only stopped by the combined powers of Brainiac 5, Star Boy and Light Lass.)Â  The Legion watches with horror as a minor diplomat tries to open negotations with the creatures who were trying to kill them minutes before.Â  As the team processes this, M’rissey (the Legion’s new comptroller and administrative spearhead) enters and points out that they could use some new blood.Â  He arranges for the team to meet some promising young heroes, including GazelleÂ (the girl that Invisible Kid met several issues ago, and still seems to be heart-thumpingly crushy over) who quickly out Timber Wolfs Timber Wolf in terms of powers and attitude.Â  The second tyro turns out to be Night Girl, who shows herself to be as powerful as Ultra Boy (and gets half her costume ripped off in the process) so long as the lights aren’t on.Â  Last up are Turtle (who is essentially invulnerable) and Sizzle who can redirect energy.Â  When they ask for somebody to throw some heat,Â a voice responds, “Leave it to me!”Â  Everyone is stunned and happy to see the return of Sun Boy!

The new kids show off their powers, and the team goes into psychic conference, with one exception.Â  Sun Boy’s return causes Princess Projectra to disappear from their confab, as his old comrades in Terror Firma killed her planet.Â  Dirk (Sun Boy’s real name) reveals that he personally put his old teammates in jail and he wants to return to active duty with a team that doesn’t have as many personality problems.Â  They meet, they vote, and the team votes in Gazelle, and agrees to return Sun Boy to active duty.Â  Night Girl barely gets rejected (and Shadow Lass points out the obvious advantage in their teaming up) and Brainiac asks her, Turtle and Sizzle to join their new “Legion Reserve” team.Â  Go, SUBS!Â  Lightning Lad makes the point that the team prefers a certain symmetry to their noms de guerre (“Power descriptive and then gender.Â  It’s customary”) which cracks me right up.Â  Saturn and Phantom Girls worry about the missing Projectra, and Brainiac realizes that the Invader Planet delegates aren’t ever real people.Â  Brainiac 5 works on the autopsy data from the alien destroyer, and Invisible Kid asks how he got access to it, only to have Brainiac tell him he memorized the data.Â  (!!)Â  Meanwhile, at the diplomatic talks, the Secretary of the U.P. gets flashed by an alien device and falls to the ground, apparently dead…

This was a nice issue in terms of team dynamic for the LSHers, showing them all working together, and putting their diverse opinions (with the notable exception of Jeckie) to the test without excessive conflict.Â  Nice character bits come through for Invisible Kid, Brainiac, Lightning Lad and others, but the whole Invader Planet storyline seems to have been going on for about two years now.Â  I’m torn between being excited about the new adventures (pun fully intended) in store for the Legion and wishing that this iteration of the team could have a little more time to establish itself, but this issue read quick and went down easy…Â  It’s a breezy little look at LSH parliamentary procedure, and gives us some cheesecake to boot.Â  Legion of Super-Heroes #48 earns a well-done 3 out of 5 stars, and at least my usual ‘writing for the trade’ complaint is moot.Â  This time, I know exactly when this storyline will be wrapping up.