Fifth Terminator Film on the Way 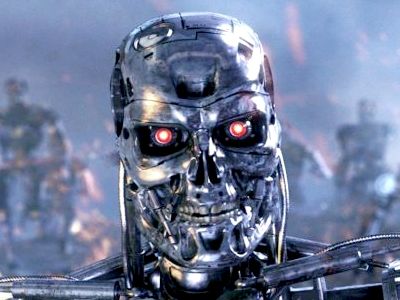 We’ve only seen previews of the upcoming Terminator Salvation flick, and while it looks good, the fifth film is already in the works.

When Anderson and Kubicek acquired the rights the lucrative “Terminator” franchise last year from previous owners C2, the former ad exec and banker envisaged the re-booted series as a trilogy. Christian Bale has signed on in the role of John Connor for all three roles. Newest pic is tentatively skedded for a 2011 release.

The duo had originally planned to wait until the release of “Terminator Salvation” next summer before deciding on whether to proceed with the next chapter, but the positive studio, fan and media reaction to footage from the current pic has encouraged them to move forward ahead of schedule.

The announcement was made at the Dubai International Film Festival, and it was hinted the movie migh take place in the Middle East.

It’s interesting that the exec producers are giving the go ahead to a movie based on positive response to trailers and such.Â  I’ve seen some really awesome trailers in my day, but when the film is released it stinks to high heaven. Considering Bale has signed for all three movies, it’s a pretty good sign the film is actually good.