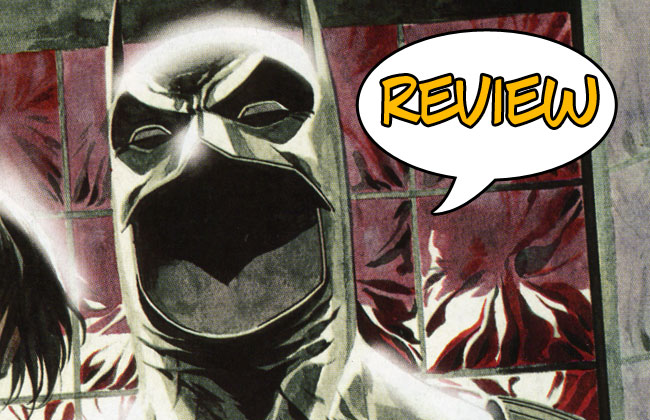 Apparently Batman is dead, but youâ€™d never know it if youâ€™ve been reading Detective Comics for the last year or so.Â  The plausible exit created by Paul Dini at the end of last issue, leads naturally to the events Denny Oâ€™Neil uses in Detective Comics #851.Â  Batman dead?Â  Unlikely, so why mourn the loss here?Â  Instead, Oâ€™Neil uses the time to tell a good Detective story.

Two new characters are introduced to Gotham City, and they are introduced in a way that ties back to events that happened to the city years ago.Â  While a full backstory on Millicent Mayne (rhymes with Wayne?) is incomplete, there are indications she may not be totally on the level.Â  The issue opens with her and Gracchus, a shady fellow I assure you, having an argument over the cost of a bag of stolen diamonds.Â  Millicent, dressed to the nines in a revealing white dress, is at the business end of a gun as she tells Gracchus sheâ€™s not interested in buying his stolen wares. Â  At the moment Gracchus is about to pull the trigger, the entire theater, in which the events transpire, begins to shake as the Gotham earthquake – the event that created two yearâ€™s worth of story in the Batman titles – hits the area.

In the confusion, Millicent is able to escape and the impact of seeing Gotham in ruins changes her, and years later, the actress is still doing everything she can to raise money to rebuild parts of the city.

This is the kind of continuity I like in my comics as Denny Oâ€™Neil isnâ€™t forced to concoct a complicated event to introduce the characters and move the story forward.Â  Millicentâ€™s character is impacted by the events of Cataclysm, Aftershock, and No Manâ€™s Land, and she naturally becomes a different person because of it.Â  Kudos to Oâ€™Neil for working with continuity to tell an original tale.

Gracchus and his henchmen also escape the disaster, and when the story jumps ahead to present day, there are implications that Two-Face played a role in their rescue.Â  Itâ€™s also clear that Harvey in no way wants to be burdened with Gracchus and his like, but still takes advantage of their current hideout for his own purposes.

Gracchus, still holding a grudge against the one that got away, shows up at one of Millicentâ€™s fundraiser, wearing a really bad Two-Face mask and attempts to rob everyone.Â  To further convince those in attendance that he is the scarred villain, he throws a vial of acid on Millicentâ€™s face.Â  All of this goes against Harveyâ€™s wishes and demands, and at some point Gracchus is going to get his.

Oâ€™Neilâ€™s depiction of Harvey Two-Face is an interesting one.Â  Instead of a goofy loon, or disturbed psychopath, we see a character who is doing his best to first protect, and then avenge Mayneâ€™s disfigurement, but canâ€™t because of his own coin flipping rules.Â  When the coin lands clean side up, and he canâ€™t kill Gracchus for impersonating him and marring the host of the event, thereâ€™s an almost bitter disappointment in his reaction, and Oâ€™Neil is able to bring that reaction to the surface in a way many readers may not have seen before.

These events prompt Alfred to call in Nightwing to deal with the issue, and there are several great moments when Dick almost chokes up with the realization that his mentor is MIA.Â  While the Battle for the Cowl is still a couple of months away, it is clear that at this time Dick really doesnâ€™t want to be Batman.Â  His actions speak differently though as he uses his resources and detective skills to track down Gracchusâ€™ hideout.

Two-Face will always be Dickâ€™s arch-nemesis, but his role in this story is that of guest star, as he really plays no other part than the catalyst for getting Dick to return to Gotham.Â  He doesnâ€™t have anything to do with Millicentâ€™s attack, and heâ€™s certainly not around when Dick battles Gracchusâ€™s gang.Â  Two-Faceâ€™s appearance suddenly feels forced and is the one part of the story that brings down this issue.Â  Granted Two-Face is a big character right now thanks to The Dark Knight movie, so I can understand trying to get him into as many books as possible.

By the end of the issue, I feel sympathy for Millicentâ€™s character, and while I love her veiled look as she wanders areas of the city that are still devastated by the earthquake, itâ€™s always going to be the first impression that ruins it for me.Â  Long ago, Dark Horse Comics had an event called Comics Greatest World in which a dead woman returned to life, dressed in white with a hood and veil, looked stunning and fought crime.Â  Iâ€™m referring to Eric Lukeâ€™s Ghost, and while the characters are not alike (one is alive and the other isnâ€™t), its the character design that has ruined the Face of Gotham for me.

The art by Guillem March is fantastic.Â  Iâ€™ve been spoiled by Dustin Nguyenâ€™s wonderful styling for the last year, and an abrupt change in artist generally spells trouble for a series.Â  Not so in this case.Â  Guillemâ€™s work starts strong, and while I think it tends to get a little sloppy at the end, it holds up well and I wouldnâ€™t mind seeing more of his work in the future.Â  If I had to choose, Iâ€™d have to say I still canâ€™t wait to see Nguyenâ€™s work back in the pages of Detective Comics.

The nice thing about this issue is even though Batman is missing, it doesnâ€™t feel like a Batman-is-dead-and-we-donâ€™t-know-what-to-do-about-it issue.Â  Batman is simply away, and the supporting cast are there to do what they do best.Â  Had it not been for the RIP event in Batman, this issue feels like a natural transition from Batman and Catwoman running away at the end of Diniâ€™s last arc, or a story that had been in the DC filing cabinet for a couple of years that has been dusted off and polished to fill in the gap between the end of RIP and the time when Final Crisis ends and the Battle for the Cowl begins.Â  I liked the pacing of the story, and the way in which new characters are introduced.Â  While I prefer to have Batman in Detective Comics, a detective story is still a detective story, andÂ  Detective Comics #851 earns 3.5 out of 5 Stars in this outing.