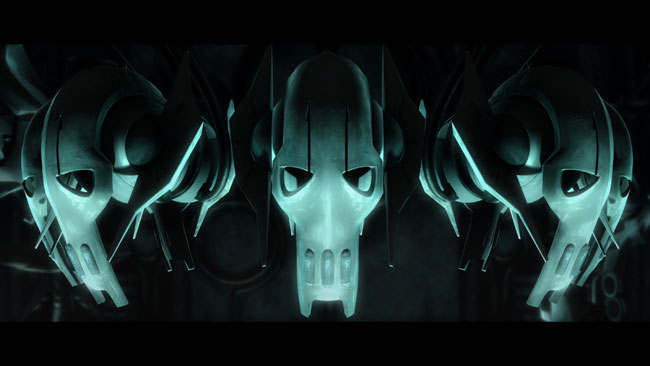 Jedi Master Kit Fisto steps from the shadows of the live-action films and into a Separatist trap in â€œLair of Grievous,â€ an all-new episode of the hit animated series STAR WARS: THE CLONE WARS, premiering at 9 p.m. ET/PT Friday, Dec. 12, on Cartoon Network.

In the episode, General Grievous must prove himself worthy of the Separatists after repeatedly being defeated by the Jedi. As a test for his cyborg subordinate, Count Dooku lures Jedi Master Kit Fisto and Fistoâ€™s former Padawan, Nahdar Vebb, to Grievousâ€™ enclave as deadly sport for the Separatist general.

Episode writer Henry Gilroy says heâ€™s always been intrigued by the concept of â€œwhere evil actually lives,â€ and this tale of attempted redemption for General Grievous presented the perfect opportunity to explore the idea.

â€œI went back to the old serials of the 1930s and looked at the terrible old places they used to create for the villains,â€ Gilroy says. â€œThey were houses full of booby traps and monsters, with eyes knocked out of the paintings so the villain could look through and spy. It was fun to explore the home of the bad guy, to create a place so terrible that even the hero doesnâ€™t want to be in there.

â€œItâ€™s a great set-up because when the Jedi arrive, theyâ€™re expecting to find Nute Gunray â€“ they donâ€™t realize theyâ€™re in the lair of Grievous. From that point on, once theyâ€™re inside and realize they canâ€™t get out, itâ€™s basically a struggle to survive.â€

The episode also provided the perfect vehicle for the series introduction of Kit Fisto, a popular Jedi Master who appears in both Star Wars: Episode II Attack of the Clones and Star Wars: Episode III Revenge of the Sith. Like many other Jedi, his character was relegated to the background in the films â€“ but is now more deeply realized through animation in STAR WARS: THE CLONE WARS.

â€œKit isnâ€™t one of the most serious Jedi. He tends to be more jovial,â€ Gilroy says. â€œTo put him in a dire, life-or-death situation makes for a fun adventure because he tends to look on the more positive, naturally humorous side. Dread kind of rolls off him.â€

â€œKit is great for this episode,â€ says supervising director Dave Filoni. â€œHe has an excellent fight with Grievous, and the episode is brilliantly directed by Atsushi Takeuchi. While we had quite the challenge deciding what Kit Fistoâ€™s voice would actually sound like, once it was determined he would have a bit of a Jamaican accent, Phil LaMarr really made it his own.â€