By Stephen Schleicher on December 4, 2008 2 Comments 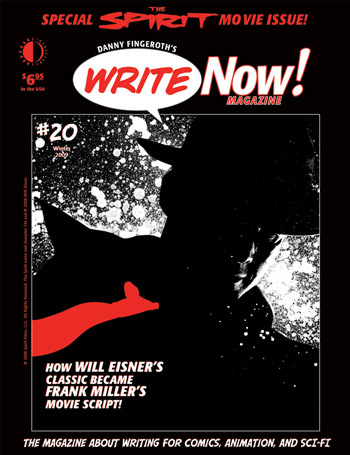 Print publications are folding left and right as more readers migrate to teh interwebs for their news, features, interviews, and general pleasure.Â  The latest to end its print run is TwoMorrows’ Write Now!, the how-to magazine for those learning to write for comics, animation and sci-fi.

“Write Now! has had an amazing run, and I’m incredibly proud of what editor Danny Fingeroth has accomplished with it,” offered TwoMorrows’ publisher John Morrow. “Danny has shaped it into the preeminent publication catering to anyone with an interest in the nuts and bolts of writing for the comics medium. If you’ve read every issue, you’ve likely acquired the equivalent of a higher education degree in the intricacies of scripting. But while our readership has been fanatically loyal during its run, both Danny and I feel the magazine has reached a point where the economy is taking a toll on its circulation, and the increasing amount of time involved in its production might be spent more productively elsewhere. So we’ve jointly decided that #20 will be the last issue.”

â€œProducing Write Now! For TwoMorrows has been one of the highlights of my career,â€ said editor Danny Fingeroth. â€œThe art and craft of writing comics is something that is often neglected due to the higher visibility of comics art. Write Now gave me the chance to share what Iâ€™ve learned about writing over the years with people who are passionate about expanding their writing knowledge and skills. I got to meet and speak with many great creators of all eras during the magazineâ€™s run, getting them to speak about what they do in ways that had seldom been touched on before. And, of course, working with the great John Morrow the rest of the TwoMorrows crew was always a pleasure. I look forward to continuing my relationship with this important publishing entity.â€

Subscribers will be receiving information shortly regarding the resolution of any prepaid issues beyond #20, with the option of receiving either a refund, or applying their balance toward another TwoMorrows book or magazine.

The final issue ships in February, and will focus on the Spirit movie.