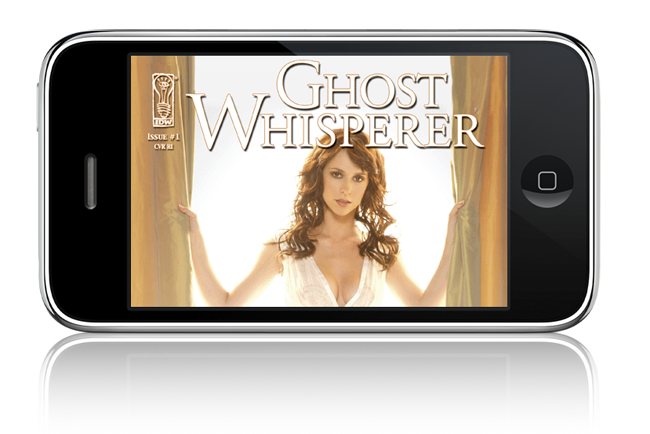 (San Diego, December 1, 2008)Â  IDW Publishing and iVerse Media are proud to announce the immediate availability of Ghost Whisperer: The Haunted #1 in the iTunes App Store.Â  This five-issue comic book miniseries, licensed from CBS Consumer Products, is based on the hit CBS series starring Jennifer Love Hewitt as Melinda Gordon, the medium who helps ghosts cross over.Â  “Ghost Whisperer: The Haunted” is written by Carrie Smith and Becca Smith, who are both writers on the CBS series, and features art by Elena Casagrande.

The story in the comic fits in between Seasons 2 and 3 of the show, and follows Melinda as she spends her days and nights helping earthbound spirits cross over into the Light.Â  In the comic series, however, Melinda gets more than she bargained for when she comes face-to-face with Osiris, Egyptian God of the Dead, who wants the souls for himself.

The comic follows the same format as the show, with a ghost that needs to cross over in each issue.Â  Unlike the show, however, another ghost – Osiris – appears in each issue, tying the miniseries together and keeping the tension on the rise from one issue to the next.

The digital version of the comic was adapted to the iPhone and iPod touch by iVerse Media. A new issue of the series will be released every few weeks until all 5 issues of the series have been adapted digitally.

â€œMany fans of the Ghost Whisperer TV show may not even realize that the comic book exists so this presents an excellent opportunity to reach out to both existing and new readers. The digital format is a no-brainer for this type of content,â€ IDWâ€™s CEO Ted Adams said.

“We’re very excited to be making Ghost Whisperer available to iPhone and iPod Touch owners,” said Michael Murphey, owner of iVerse Media. “IDW has created a fantastic comic book that is true to the television series, and a great gateway into digital comic books for new readers of the format.”

“Ghost Whisperer: The Haunted #1” is available in the iTunes App Store now for $0.99:
http://www.apple.com/iphone/appstore/