Top Cow has sent Major Spoilers the cover images and solicitation information for titles arriving in February 2009.Â  Take the jump for the complete list, which includes the 75th issue of The Darkness.

An all-star cast of artists assembles in this oversized book to illustrate the historic 75th overall issue of The Darkness. Combining all three volumes of The Darkness since its debut in 1996, weâ€™re renumbering the current series to pay tribute to the legacy of this rich and storied character.
Journey into a bleak and twisted future to witness humanityâ€™s struggle to survive amongst the wreckage of the eternal conflict between The Darkness and The Angelus. Can Jackie Estacado step off this path to ultimate destruction or will he allow The Darkness to turn him into a global tyrant? 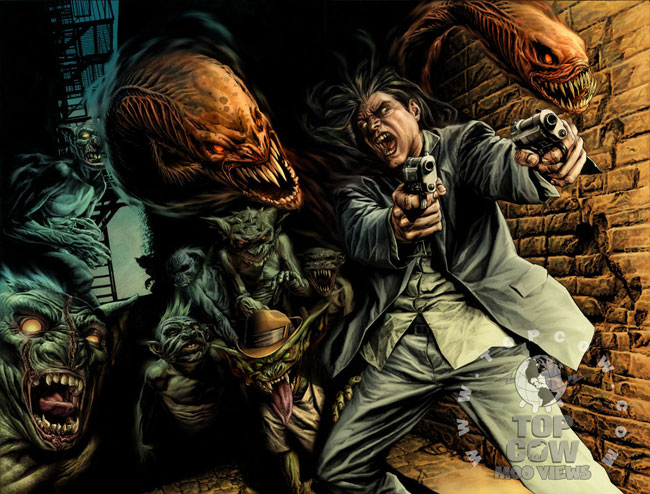 Beautiful women all over the city are killing men they don’t even know, and then claiming they don’t even remember the events. When Sara and partner Gleason are assigned to investigate the case, they’re thrown head first into the dangerous and deadly world ofâ€¦plastic surgery?
Cover A â€“ Sami Basri
Cover B â€“ Eric Basaldua

The new series for this Pilot Season 2007 winner continues! From the pages of Marc Silvestriâ€™s Cyberforce comes a new solo title for this Top Cow super speedster!
When Carin Taylor, a.k.a. Velocity, turns down an offer to work for a corporate mogul, he doesnâ€™t take it well! Before she knows it, sheâ€™s attacked by a small army of private soldiers and not one, but TWO assailants who can literally keep pace with her! Itâ€™ll take a familiar face from her past to help her get out of this jam!

Get a sneak peek at some of the exciting new projects coming from Top Cow in 2009!
This Preview Book features an original Berserker story, the new comic series produced by â€œHeroesâ€ star Milo Ventimiglia and his DiVide Pictures partner, Russ Cundiff. Created by screenwriter Rick Loverd, Berserker combines elements of superheroes with Norse mythology. Throw in some bone-crushing violence and punch-in-the-mouth action and youâ€™ve got a recipe for a great Top Cow book!
Thatâ€™s just the beginning! Also in this Preview Book is an exciting glimpse at a diverse mix of other projects coming from Top Cow in 2009. You donâ€™t want to miss it!

Dale Keownâ€™s raw and feral Berserker image can now be yours in this limited, numbered lithograph, accompanied by a Top Cow Certificate of Authenticity and shipped in a protective sleeve.

This Premiere Hardcover collects all six issues of 2008â€™s blockbuster storyline, Broken Trinity, plus a slew of bonus material, from a cover gallery to behind-the-scenes commentary. Much like 2007â€™s First Born story arc, Broken Trinity upsets the status quo of the Top Cow Universe as one of the three principal characters in the never-ending battle between Light and Darkâ€”Witchblade, The Darkness and The Angelusâ€”dies, never to return. In addition, new characters enter the fray, setting the stage for a new ongoing series to debut later in 2009!

In this second installment of The Darkness novel series by author Kerri Hawkins (Blood Legacy), Jackie Estacado struggles to control his branch of the triumvirate powers of the universe while still operating as a mafia hitman. Caught between his earthly enemies and his supernatural foes, Jackieâ€™s greatest battle might be with the black force residing within him.
Jackie loves little beyond himself, but when his childhood friend Jenny is threatened, his hard-edged persona is tested. He begins to understand that The Darkness has its own agenda, and although the dark power might help him, it might also consume himâ€¦