Dynamite Entertainment has several titles coming your way in February 2009, and has sent Major Spoilers the cover images and solicitation information.

Exploring the origins of the beautiful and mysterious Masquerade, writer Phil Hester opens with young Diana Adams who would grow up, inspired by the heroes of the age, to fight crime in her own unique way! Illustrated by the art-team from Project Superpowers Chapter One â€“ Carlos Paul and Debora Carita â€“ the 4 issue series is overseen by Alex Ross, who also provides the incredible cover to issue #1 (and the series).

Plus, issue #1 features an incredible series of covers, including the incomparable Frank Cho, Jazzy John Romita and interior artist Carlos Paul!
All on high-end cardstock covers ala Marvelâ€™s Civil War and Secret Invasion! (Visit www.DynamiteEntertainment.com to see the Paul cover.)

Three bounty hunter siblings blaze a path of death and destruction across the old west.Â  Traveling by moonlight they rip criminals screaming for mercy froÂ­Â­m their hiding places, but none is ever given.Â  Each bounty is torn, broken, and bled dry before they are delivered dead and payment collected in gold â€“ no silver.Â  The Irons are the most feared bounty hunting killers in the west, but that fear isnâ€™t based on them being the fastest with a pistol or rifle.Â  Itâ€™s because theyâ€™re the walking dead.

A lone tortured soul tracks them with vengeance and salvation driving him to end the curse upon his family.Â  Those who he rescues call him savior but those who look upon his twisted and scarred face call him monster.Â  Silas Irons is the only hope his brothers and sister have of salvation from the abominations theyâ€™ve become.Â  But even the purity of his heart canâ€™t stop the unnatural rage and bloodlust building in his diseased soul.

A black curse turned these siblings into monsters but deep rooted and twisted family history made them into the worst kind of horrors.Â  This yearâ€™s biggest supernatural western tale begins here!Â  Written by James Kuhoric (Freddy vs Jason vs Ash), illustrated by Jason Alexander (Hellboy’s Abe Sapien series), and based on character designs and covers by Jae Lee (The Dark Tower).Â  Dead Irons â€“ 99 innocent souls â€“ 6 undead monsters â€“ 1 shot to save the world.

Featuring a main cover by Jae Lee, and a 1-in-8 chase cover by Jason Shawn Alexander. All on high-end cardstock covers ala Marvelâ€™s The Dark Tower!

A special â€œdone-in-oneâ€ issue from writer Mike Raicht, joined here by artist Pablo Marcos as the pair clean-up Ashâ€™s life and prepare him for his next exciting journey!

Fully authorized by Sci Fi and the show producers, the world of Galactica and the first â€œapocalypseâ€ with the Cylons is finally told!

New York turns emerald green as Saint Patrick’s Day strikes, and Hughie gets to see the G-Wiz boys at their very worst. He also sits down for a pow-wow with Butcher, who lets a couple of secrets slip- to Hughie’s extreme discomfort. And back at the G-Mansion, the G-Men face the most vocal component of the G-Empire… in We Gotta Go Now, part five. Suggested for Mature Readers.

In this issues, we see continued flashbacks to the history of the Death Defying â€˜Devil and his Wiseguys along with more clues to the modern day origins of deadly Claw organization and the â€˜Devilâ€™s new nemesis, the Dragon! Plus, all out action from the â€˜Devil, The Ghost and Silver Streak!

All this excitement and adventure under a series of covers by Alex Ross, John Cassaday, Stephen Sadowski and Edgar Salazar! All on high-end cardstock covers ala Marvelâ€™s Civil War and Secret Invasion!

Highlander mastermind Brand Jerwa returns to the mythos with a special 2 issue mini-series event telling the origin of the barbaric Kurgan for the first time ever!

The second season of Jungle Girl hurtles towards its amazing conclusion from creators Frank Cho, Doug Murray and Adriano Batista! Featuring two amazing covers, one by the incomparable Cho and the other from interior artist Batista!

â€œHolliday in the Sunâ€ continues from writers Luke Lieberman and Matt Wolpert, and artist Diego Bernard! Featuring two incredible covers, both painted exclusively for this series: one by Richard Isanove and the other by Homs!

Red Sonja and Dynamite begin their march towards issue #50! As the mystery of the Blood Dynasty unfolds, each and every issue will be hurtling towards the amazing events in store as Dynamite hits the landmark 50th issue!

RED SONJA is recruited by the wizard VERDIUS to act as his bodyguard on a quest to find the last nesting place of the dragons.Â  These magnificent creatures were once plentiful, but have been hunted to near-extinction, with the massive Great Dragons lost forever, and the smaller ones nearly gone as well.Â  Verdius wants to save those few that remain, and has just discovered where they gather to mateâ€¦ as they travel, a rival wizard is battled and the fate of the magnificent beasts rests in Sonjaâ€™s hands!

Featuring two amazing covers, one by Marcos and the other a beautiful wrap-around by Joe Prado! 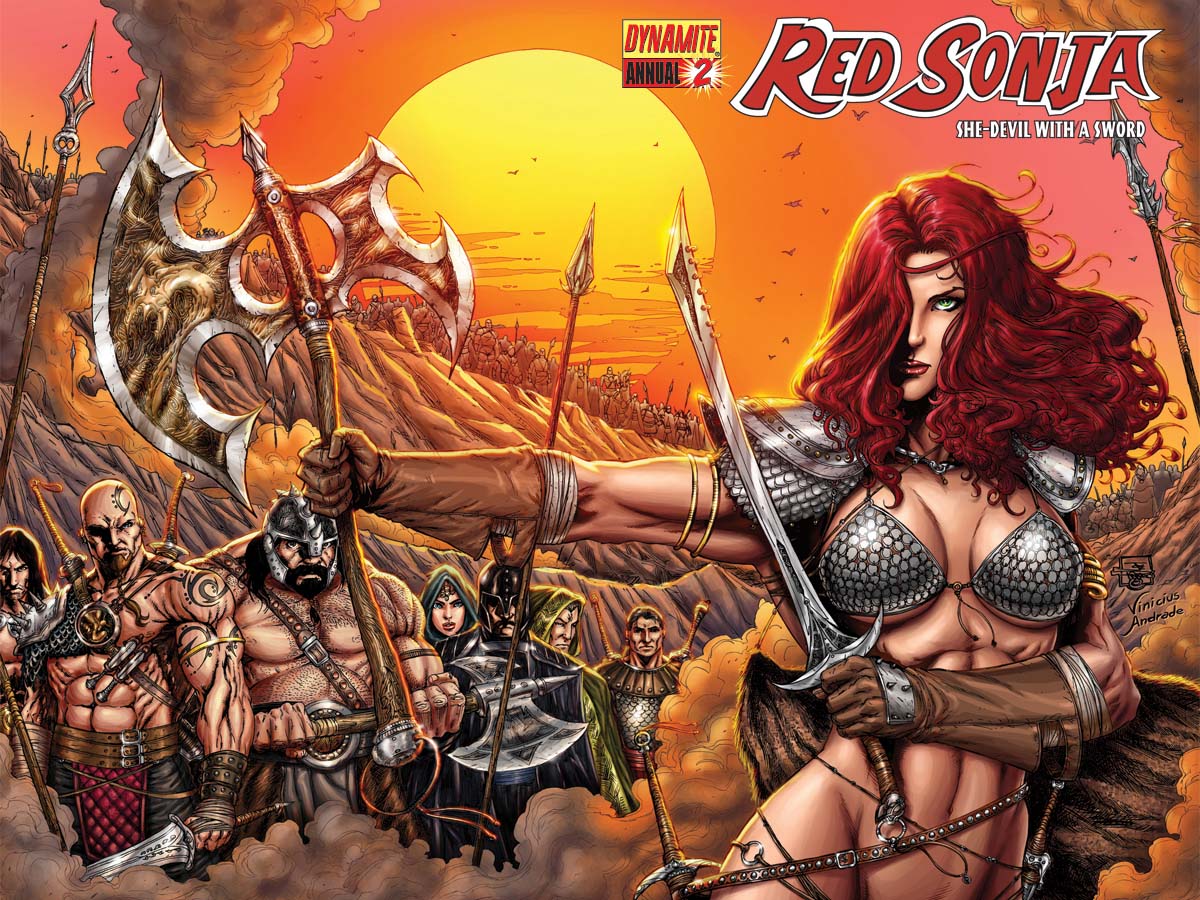 The sequel to last yearâ€™s smash â€œInfinityâ€ series continues from writer Simon Furman and artist Lui Antonio! Featuring two amazing covers, one by Nigel Raynor and the other by painter Richard Isanove!

As Diego continues to fall â€“ and fall hard â€“ for the lovely Lolita, Sgt. Pedro Gonzales is recruited into a devilish scheme to destroy Zorro once and for all! Featuring two covers, one from writer Matt Wagner and the other from Francesco Francavilla!

DYNAMITE ENTERTAINMENT is proud to be the new home for the next series of Garth Ennis’ “war” books, all under the “Battlfields” header!

Late summer, 1942. As the German army smashes deep into Soviet Russia and the defenders of the Motherland retreat in disarray, a new bomber squadron arrives at a Russian forward airbase. Its crews will fly flimsy wooden biplanes on lethal night missions over German lines, risking fiery death as they fling themselves against the invader- but for these pilots, the consequences of capture will be even worse. For the pilots of the 599th Night Bomber Regiment are women. In the deadly skies of the Eastern front, they will become a legend- known, to friend and foe alike, as the Night Witches.

Featuring issues 1-3 of the Night Witches series, along with a complete cover gallery featuring the art of John Cassaday and Garry (Dan Dare) Leach, along with a special look at the making of the series with artist Russ Braun! Suggested for Mature Readers.

Dan Dare has made his Dynamite in this Hardcover Edition of the acclaimed series from writer Garth Ennis and artist Garry Leach!

Dan Dare has been an icon since 1950. Elaborate stories of his space travel and galactic battles defending people of the universe captivated post-War baby boomers. Dan Dareâ€™s adventures burst to the forefront of pop culture, selling nearly 1 million copies each week in the pages of the Eagle Comic. And now heâ€™s back!

â€œDan Dare is the quintessential British hero. Heâ€™s our Captain America, our Superman, our Batman, heâ€™s all of them rolled into one. Heâ€™s the original and the best,â€ said Garth Ennis in the initial press release, and the writer did the hero proud in one incredible series!

Dan Dare is set in the future, albeit not too many decades from the present day. Colonel Dare is still vibrant and courageous â€“ but now heâ€™s retired. His retirement is a self-imposed exile, the result of his disgust with politics and the post-nuclear warfare that has destroyed North America and much of Asia â€“ leaving the UK as the worldâ€™s last remaining superpower. Readers familiar with Dan Dare stories will recognize many of the original cast including a wiser and more experienced Digby; the innovative, brilliant and beautiful Professor Peabody; and of course the enemy of all that is good, the super-intelligent ruler of the Treens â€“ The Mekon, together with a mix of galactic evil beings.

The Dynamite Hardcover Edition will feature the complete Ennis series along with a complete cover gallery!

DYNAMITE ENTERTAINMENT continues their successful run of Battlestar Galactica “Origins” with an all new series focusing on the characters and events of the award-winning Sci Fi series!

Veteran Galactica writer Robert Napton comes on board for the first “origin” tale featuring the commander of the Galactica, William Adama! Journey back to the first Cylon Wars as we explore the myth and mystery of Adama! Joining Napton for the tale is Origins artist Jonathan Lau as this trade collects their incredible 4-issue series! Also includes a complete cover gallery!

Now, the back half of the acclaimed series (issues 7-12) is collected here in Volume Two of the series!

Writer Brandon (NBSG: Zarek) Jerwa is joined series artist Jackson Herbert for this all new series which tells the untold tale of the crew of the Battlestar Galactica! Set approximately two years before the SCI FI mini-series which relaunched Battlestar Galactica to such acclaim, the 6-issues collected here follows Commander Adama and crew as they take on their first mission on board the Galactica. Also includes a complete cover gallery!