Vincent Price PresentsÂ  #6
Writer: Nick Lyons
Pencils: Bang Thai & Joel Robinson
Cover Artist(s):Â  cover: Joel Robinson
This one shot features a brand new story called THE DAME!Â  Private eye Frank Wood (Vincent Price) takes on a case in which he must track down a wealthy husband’s beloved missing wife. As Frank investigates the case further, he realizes the client is hiding a major secret about his wife. A deadly secret.

Female Force: Sarah Palin
Writer: Neal Baily
Pencils: Ryan Howe
If you thought Hillary Clinton was a controversial female force, just wait until you get a good look at Sarah Palin! Bluewater Productions proudly presents a critical examination of the life and times of John McCainâ€™s running mate in the next part of their examination of important female individuals.

The classic sci-fi film from Legend Films gets updated in this new modern comic version.Â  Learn why earth has not been back to the face of the moon.Â  Monsters, intrigue and alien woman round out this non-stop adventure. 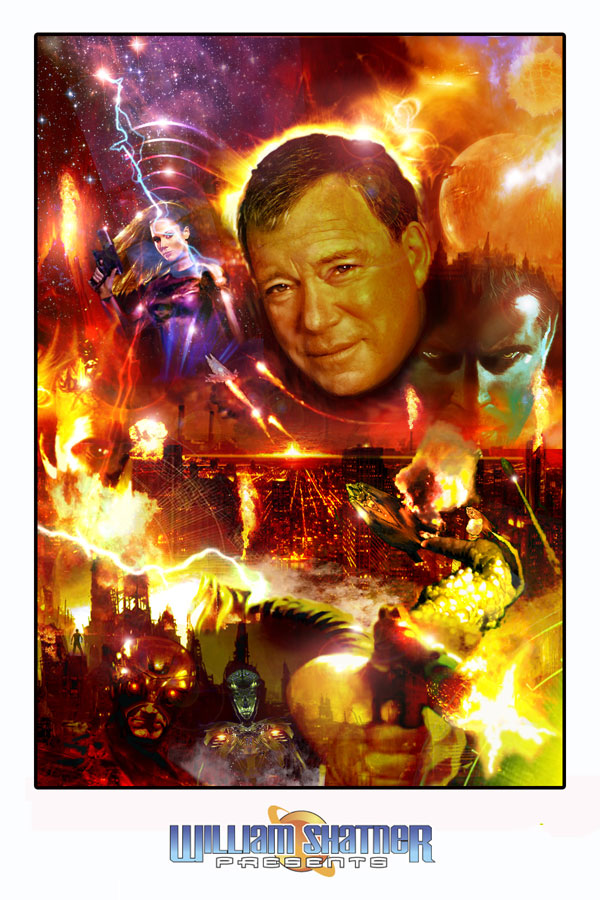 This March starts the new line of William Shatner comics at Bluewater.Â  To start them off we are featuring a limited print featuring the artwork of Sci-Fi novelist Alan Brooks.Â  The image features a montage of the titles Bluewater is producing with the icon.

Ray Harryhausen Presents: 10th Muse 800
Writer: Adam Gragg
Pencils: Roman Morales III
Cover Artist(s): Nadir Balan
Legenary filmmaker Ray Harryhuasen reimagines Bluewaterâ€™s flagship title the 10th Muse. The Muse of Justice is back, better than ever!Â Â  After witnessing the destruction of Olympus, Lxandra wakes up in a whole new world and an even new body.Â  The world has changed, but the pursuit of justice remains. Not only must the Tenth Muse adjust to her new life, she must also fight a new enemy with an old face.Â  The battle for the city of Neo Ithaca begins with a bang in Tenth Muse 800; Devils Due!

THE ODYSSEY PRESENTS: JUDO GIRL & VENUS (ONE SHOT)
Author(s): Chad Rebmann
Artist(s) Jay Odjick
Cover Artist(s): Gregg Paulsen
Venus is back in her very own special, and this time sheâ€™s bringing Judo Girl along for the ride.Â  After the events of The Odyssey, everybodyâ€™s favorite matchmaker is back at home in Hollywood doing what she does best. Coupling Hollywoodâ€™s elite for maximum exposure potential. That is, until the evil Medusa shows up, looking for the Sword of Perseus, the only weapon that can do her harm. Medusa has tracked the sword to Los Angeles, where a Hollywood agent has bought the piece at a private auction. To keep Venus at bay, Medusa takes her star client, Chloe Sanders hostage! Since Venusâ€™s powers donâ€™t work on fellow Olympians, she calls in gal pal Judo Girl for a weekend of ass kicking. Come join in the fun as Judo Girl and Venus leave a trail of destruction in tinsletown to stop Medusa and the Sword of Perseus. Guest starring Orion the Hunter.

Power of the Valkyrie #1
Writer: Chris Studabaker
Pencils: Mannix
Cover Artist(s): Mannix
Philosophic action and adventure continues in this new saga starring Bluewaterâ€™s Norse hero and written by Day Prize-nominee Chris Studabaker. Suzanne Bancroft is going to die, and the end of the world will be her fault. A relentless demi-god has declared he will murder Suzanne and her death will begin a chain of events culminating in Ragnarok. Worse yet â€“ her murderer can see her fate. While still trying to understand her new role as the Valkyrie, Suzanne must seek the true nature of fate and ask herself a hard question: how do you fight a battle youâ€™re destined to lose?

Lost Raven GRAPHIC NOVEL
Author(s): Darren G. Davis
Artist(s): Various
Cover Artist(s): Keu Cha
â€œIndependent Book Publishers Awardsâ€ Bronze metal winner for Best Graphic Novel is offered again with award winning sticker on the front.Â  After learning that he has contracted the HIV virus, attorney Zak Raven leaves his practice behind to set forth on a mission of relaxation â€“ until his peaceful trip goes wildly astray, leaving Zak shipwrecked on what he thinks is a deserted island with only the words in his own journal to keep him company.Unknown to Zak, four miles below the surface secretly hides a government experimentation center where scientists are playing God by trying to artificially evolve a human based species that can survive evacuation missions in deep space. Within 900 years, earth will be dealt a deathblow by a mountain-size asteroid. However, so far they have only achieved creating living abominations. Zak and these creatures are on a collision course, and he must rise to the challenge!