Or – “In Which Projectra Makes A Fatal Error…” 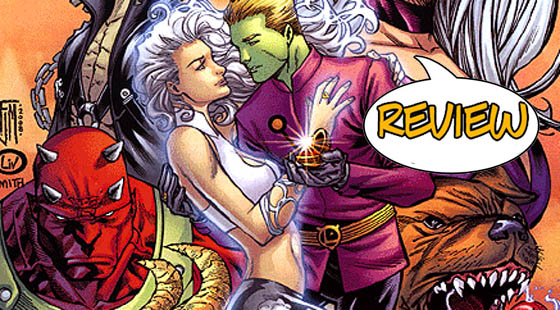 In his landmark third book of his (five-book-long) Hithchiker’s trilogy, the late Douglas Adams makes a reference to the seemingly absent socialÂ life of Arthur Dent, long the central character of the novels.Â  “What is he, man or mouse?Â  Is he interested in nothing more than tea and the wider issues of life?Â  Has he no spirit? Has he no passion?Â  Does he not, to put it in a nutshell, &@$!?”Â  Those who have wondered things like this about your superhero teens from the future, read on…Â Â  Others may wish to skip to the last paragraph, which is a good bit and has Marvin in it.

Previously, on Legion of Super-Heroes: Cosmic boy has been lost to the timestream.Â  Lightning Lad has

finally gained control of the Legion.Â  Princess Projectra has lost her family, her home, her station and her fortune.Â  Phantom Girl is concerned about her.Â  Saturn Girl misses her boyfriend, Lightning Lad.Â  Ultra Boy assists her in doing something reckless in a closet that involved nudity and ultra-breath.Â  Dream Girl is very, very dead.Â  Mon-El is stuck in the Phantom Zone again.Â  Atom Girl wants to know why everyone keeps calling her ‘Violet.’Â  Chameleon got his hand chopped off.Â  Element Lad has been observing the proceedings with a serene smile.Â  Karate Kid and Light Lass went off and had a tryst of some sort.Â  Colossal Boy, Shadow Lass, Triplicate Girl and Sun Boy haven’t done much lately.Â  Star Boy saved the solar system.Â  Debra was a Catholic girl, she held out to the bitter end.Â  Invisible Kid may or may not have sold Ultra Boy up the river.Â  Timber Wolf stood around and growled a lot.Â  Supergirl returned home to show off her midriff to 100,00 Kryptonians.Â  Dream Boy was pretty much all around a bad idea.Â  88 Lines About 44 Legionnaires…

We open on a very cute scene, as Brainiac 5 continues to analyze and reverse-engineer alien destroyer weaponry from a captured ‘data-ripper,’ formerlyÂ known as Chameleons hand, while Dream Girl lounges on a table fascinated by a snow globe.Â  Granted, it’s a REAL snow globe, a miniaturized version of a weather system that Brainy put together one afternoon while bored, but he waves it away.Â  By using Cham’s duplicated hand weapon, he can figure out the alien technology.Â  Dream Girl isn’t interested, trying to distract him with the revelation that he’ll be traveling in the past soon (shades of Legion of 3 Worlds?)Â  He ignores her, so she pulls out the big guns (metaphorically speaking) and tells him her OTHER prophecy.Â  “I see us making love.Â  Real… physical…Â  and Ooh-la-la, so intense!”Â  Brainiac once again ignores her, since his weapon has grown a full sized Alien Destroyer by accident, which kills and eats Dream Girl before he can stop it.Â  Brainiac is crushed, but Dreamy pulls him back to his feet, unharmed.Â  “This is a dream, my love…Â  It’s all in your mind.Â  Nothing can hurt me here, except…Â  You.”Â  (Foreshadowing:Â  Your clue to quality literature.)Â  Brainiac wakes up with a start (remember, Dream Girl is dead now, and only appears in his mind) and heads off on his day.Â  He also wears darling Legion boxer shorts.Â  Bygones.Â  Elsewhere in the headquarters, Projectra orders Phantom Girl to read the comic book that has captured her imagination again, and P.G. has had about enough.Â  Projectra apologizes and asks again, nicely, and P.G. tells her.Â  “Brainiac was a king whose people were wiped out by a plague…”Â  She tells the story of the first appearance of Brainiac, and his city-theivin’ ways, until Projectra interrupts her.Â  “Tell it so that Brainiac succeeds!”Â  Oh, that ain’t good.Â  Phantom Girl complies, a bit appalled, and then excuses herself.Â  Braniac teleports himself to New Orleans (???) and takes a meeting with a spiritualist, in disguise, of course.Â  It’s unclear whether he thinks to debunk her or really wants her to succeed, but he is surprised when she cuts to the chase.Â  “I’ve been seeing this girl,” he begins, and Meander replies, “How long has she been dead?”Â  She sees right through him, makes him admit his loves Dream Girl, and warns him about his “Id-Urges.”Â  She even offers to help them have a real, honest-to-Klordny physical date.Â  “But it costs a lot extra…”

Projectra also sneaks out of Legion headquarters, but she meets with her Orandan separatist group clandestinely, to discuss the menace of Dream Girl.Â  Whatever they’re up to, she thinks that Dreamy might be able to foretell it to Brainiac, and they put together a contingency for such an emergency.Â  Phantom Girl discovers that Jeckie is missing, though, and starts watching her.Â  She goes for backup, and enlists the help of Saturn Girl, hoping that she’ll help Phantom Girl get through to Lightning Lad.Â  Saturn Girl can’t face Lightning Lad after boning Ultra Boy in the service closet a couple of issues ago, but suggests that P.G. tell Brainiac 5.Â  This won’t be easy, though, as he’s on his way out on his date.Â  He meets Meander outside a club in Metropolis, and proves that, genius or not, he ain’t much with the compliment.Â  “You look… REALLY skinny and unappealing.”Â  Heh.Â  Dream Girl takes over Meander’s body, and they have an evening of romantical blah blah blah fishcakes.Â  Projectra uses her magical powers to enter Brainiac’s main, cutting loose some of the “Urges” she finds there.Â  Brainiac arrives home early the next morning, and Meander awakens, nude in a messy hotel room.Â  Did…Â  DidÂ Brainiac 5 just…Â  get some?Â  I…Â  What?Â  WHAT?Â  Brainy works a full day, then goes to sleep to see his girl, and PROPOSES MARRIAGE TO HER.Â  Suddenly, four monstrous creatures leap out of nowhere and begin beating up Dream Girl, and one of them RIPS HER EYES OUT before Brainiac can banish them from his mind.Â  Dream Girl gives him a good news/bad news, in that blindness also robs her of her precognitive powers, but she will marry him.Â  Brainiac wakes up, horrified, while Projectra and her friends celebrate a job well done…Â  and somewhere in Metropolis, the evil side of Brainiac’s personality has somehow taken solid form.

I have no idea how to process this issue.Â  None at all.Â  I’m stunned at the fact that Brainiac 5 apparently had an all-night sex-fest at the Metropolis Hilton, and I can’t imagine what in the hell has possessed Projectra.Â  All in all, though, this was a well-done outing, with lots of little moments that I didn’t see coming and even a couple that I missed upon first perusal.Â  The art was done by Rick Leonardi (not to be confused with Leonardo Leonardo) whom I’ve always associated with X-Men titles, but does a nice job here.Â  His Dream Girl is literally a dream girl, warm expressions, softness of feature, while Projectra is equally attractive, but somehow still conveys menace in her tone and carriage.Â  Jim Shooter knows how to craft a story, and he knows Legionnaires, which makes this issue’s plot and characterization work very well for me.Â  I still haven’t forgotten that Legion is probably not going to exist in this form in a couple of months, but this issue made me sad for what we’re missing.Â  Legion of Super-Heroes #47 earns an impressive 4 out of 5 stars, if only for having Meander wake up sore and think what an animal Brainiac 5 must be.Â  This is emphatically NOT your father’s LSH, and I think that more of that sort of thing might have kept this iteration of the Legion floating a bit longer…Â Â  Oh, and: Marvin.