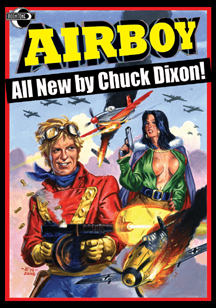 Moonstone Boooks is always trying to one-up the competition.Â  Instead of sending out the rundown of titles for February 2009, Moonstone has sent Major Spoilers the cover images and solicitation information for titles arriving in March 2009.

One of the most asked-about character returns is finally here!
Welcome Chuck Dixon back to the character that showed off his mad skills to fans everywhere!
The Ace fighter pilot, and his one of a kind plane, return with an ALL NEW story by action-master Chuck Dixon, in a never-before-told adventure!Â  Be here for the first white hot meeting between Airboy and that gorgeous femme fatale Valkyrie!Â  Intrigue, thrills, volatile physical chemistry and cinematic aerial combat!

A new maxi series of one shot comic novellas, with each issue
(by a different creative team) telling a tale of one of the 21 Phantoms!
Ben Raab and Pat Quinn (of The Phantom: Legacy) return to tell an untold tale of the first Phantom! A tale of intrigue and adventure torn from the very first Chronicle of the Ghost Who Walks!Â  When his newborn son is abducted and his family threatened, the Phantom goes on the hunt to uncover the identity of the mysterious kidnapper and bring the blackguard to justice!

32pgs, color, $3.99
Back in Action with a little thunder, a little lightning, some weapon turrets, a hypodermicâ€¦
The Penultimate chapter in the first Captain Action story arc is here!Â  Itâ€™s Savior vs Savior here as the surprises keep coming right alongside the furious action!Â  See who rises from the ashes to take on the world!Â  Plus, more Lady Action!