Or – “Man, This Buildup To New Members Is Taking FOREVER…” 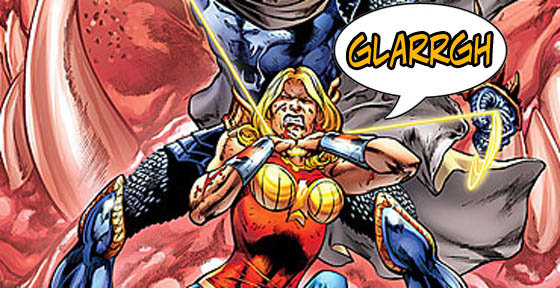 The initial relaunch of Teen Titans a couple of years ago was a revelation, taking an old concept and making it interesting again.Â  It revitalized Bart “Used To Be Impulse, Now I’m Another Dead Flash” Allen and gave us a wonderful relationship between Kon-El and Cassie “Wonder Girl” Sandsmark, and even made Beast Boy relevant again (thought Judd Winick seems ready to bury that these days.)Â  Just a couple of years later, we’re down to four members, and things just aren’t making a lot of sense.Â  But, hey, at least we got to see Marvin eaten by a giant hellhound…

Previously, on Teen Titans:Â  The sons and daughters (and wards and adoptive children and clay duplicates that were created as playmates and never expected to have their own consciousness) of the Justice League of America came together as a team in their own right.Â  They’ve broken up and reformed a dozen times since the original groupings, but the latest team-up started as a place for teen supers to spend their weekends, sort of like fat camp, only with punching and Batmobiles.Â  The One Year Later Gap pretty much put the kibosh on that, giving us a team comprised of odds and ends (though Miss Martian was pretty awesome) and later tossed in any teenager whose comic was selling (Blue Beetle misses those days, but Supergirl doesn’t.)Â  In the last couple of issues, we’ve seen the return of a teenage female version of Captain Atom called Bombshell, and the remaining Titans (Wonder Girl, Blue Beetle, Red Devil and Robin) have set off to find her, and keep her from doing something stupid and/or illegal.

The issue opens with the fearsome foursome worried that they don’t have enough power to face down a quantum-powered nuclear furnace in female form, but Wonder Girl reminds the boys that she’ll be there.Â  Robin reminds HER that she’s been sick as a dog, and her powers have been less than reliable of late, and she snorts, “Still stronger than you, though.”Â  Heh.Â  Bat-envy.Â  As the Titans search for her, we find Bombshell confronting her father (one of the military sutis that set her on her current path of destruction) and trying to find a single reason not to kill her.Â  He explains that they chose her because she was on a bad path, and he wanted to make her the hero she could have always been…Â  “You had me working freelance for Deathstroke!” she cries.Â  Heh.Â  The Titans bust in, and quickly find themselves outgunned by the girl in the peekaboo halter top.Â  Wonder Girl takes a quantum blast, but as Red Devil goes to assist her, she fades away from reality.Â  “That’s probably bad,” says K.D. in a burst of understatement.

Wonder Girl wakes on an open plain, as hundreds of people stream past her, running at full speed to escape…Â  something.Â  She watches as the mysterious armored man who has haunted her dreams arrives, kills one of the innocents for no readily apparent reason.Â  Wonder Girl is appalled, but suddenly the voice of Zeus interrupts her anger.Â  “There was nothing you could do.Â  This event occurred more than three thousand years ago…Â  I show it to you now as a warning, Cassandra.Â  The madman you saw…Â  He intends to murder you.”Â  The Beetle, the Baby Bat, and the Debbil hisself continue to fight Bombshell to no avail, as she is out of their league in terms of both power and fighting skill.Â  Robin manages to shut her down, disrupting the interface between her exo-shell and her body, but Bombshell almost immediately gets out.Â  Her father interrupts their battle to lecture the Titans about his wayward daughter.Â  “As far as I’m concerned, she’s innocent in all this…Â  And now her life is in danger.”Â  New member, anyone?Â  Zeus continues to talk to the mind of Wonder Girl, explaining that her attacker is actually her nephew (sort of) and that he murders people to steal her powers.Â  Wonder Girl suddenly remembers Marvin, but Zeus reveals that he can’t interfere with her trial.Â  “How do you expect me to survive this if I’m powerless?” she asks, but there is only this cryptic response:Â  “Find your courage.Â  Wonder Girl returns to reality, connects with her partners, only to find that Bombshell is joining up, and then getting Pearl Harbored by her nephew.Â  The last thing we see is Cassie curled up at his feet as the monstrous “Wonder Dog” gets ready to eat her liver, with or without some fava beans.

This issue didn’t really do anything for me at all, to be honest.Â  Sean McKeever’s script doesn’t necessarily have any overt problems, per se, but it just sort of meanders to it’s point, especially when it was clear that Bombshell would be joining some time last issue.Â  Fernando Dagnino does a pretty good job with the art, though, and his Wonder Girl and Bombshell are pretty alright.Â  There’s an aimless feeling to Teen Titans over the last half-year or so, as though nothing can happen until the proper Final Crisis pieces are in place (the same reason I dropped Batman and the Outsiders, actually) and I’m actually excited as heck by the by-now-old announcement that Static will be joining the team.Â  Maybe I’m just thrilled about Vergil’s return, maybe I’m just tired of watching characters defect from the team, but Teen Titans #64 earns a disappointed 2 out of 5 stars.Â