Or – “An Old Friend With A New Maturity About Him…” 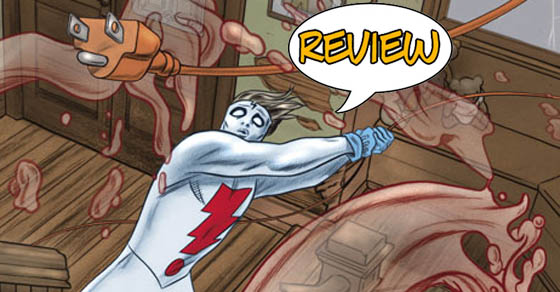 When I was in college, my friend Bruce was the one really enamored of Mike Allred’s work, collecting Madman, Red Rocket 7, and pretty much anything that Mod Mike touched.Â  I was, and remain, entertained by those books, but I suspect that to Bruce they’re the equivalent of what 1970’s Ghost Rider, The Liberty Project, and Marvel Premiere featuring the 3-D Man are to me.Â  They’re HIS books.Â  Like Bruce, like me, like Allred himself, Madman is a dozen years along, and age is bringing something new and different for Snap City’s greatest heroic figure: maturity of theme.

Previously, on Madman Atomic Comics:Â  The man who now calls himself Frank Einstein has been

through a lot of changes in his afterlife.Â  From befriending aliens, to fighting mutant street beatniks, to founding a superteam called the Atomics, the life of a Madman is a confusing one at best.Â  After a run-in with death (again) that had him questioning whether his life was nothing but a hallucination, he nearly lost his beloved Josephine to the fickle finger of fate.Â  Thanks to the powers of It Girl, Jo’s essence has been saved, but the two women have been combined into one body, one mind, rechristened Luna Jo or Juno.Â  Frank is also strangely affected to find that he is one of the mysterious “Four,” with strange voices in his head, strange doings afoot, and an inheretance from his life as ‘Zane Townshend’: a house to call his own.Â  Now, Frank is going to check out his new digs, while his mentor (and not coincidentally, one of the minds that reanimated him from Zane’s corpse) Doctor Flem and the Snap City irregulars work on a secret project to make things the way they used to be.Â  Madman is about to learn to be careful what one wishes for…

As the issue opens, we find Frank arriving at his (beautifully rendered) new digs, as Jo/Luna drops him off to check the place out.Â  She takes off for the lab, to help Flem’s assistant Bonnie with something, and Frank enters the house, thinking his friends are just afraid.Â  “They may have been joking when they said it might be fun if this place is haunted, but I think they’re more right than they know.Â  Frank enters the house, hoping for a clue about his lost family, but the voice in his head keeps nattering away…Â  “There is a rift between our worlds.Â  The veil is thin.Â  There is no reason to be afraid.”Â  Suddenly, his way is blocked by a spectre, a big red ghost with a forked tongue, and the Madman insists on fighting.Â  The voice speaks directly to him, eplaining what is happening, how souls leave bodies and go into Spirit Prison.Â  “Your premortal name was Prometheus,” it tells him.Â  “Limitless power surrounds us…Â  It is available with the proper faith and authority.”Â

Frank is suddenly siezed by a vision of the future, as Jo, returned to her normal self and body, flits through the house, cleaning it as though they live together.Â  “You and she have been sweethearts since the beginning of time,” explains the voice, telling him that he’s seeing the true future.Â  An existential conversation takes place in his head as he climbs higher and higher, exploring the rooms of his family’s home, until he reaches the abandoned attic.Â  The source of the voice is revealed, as a transparent man stands in the empty attic, beckoning him.Â  “You knew me as Zacheous,” the spectre says.Â  Frank asks about his parents, and is told that they’re happy in Paradise, and that Jo is currently being separated from Luna.Â  Frank immediately sets off for home, running next door to ask if he can use the phone, only to find the neighbor slamming the door in his (green-skinned, superhero-costume-wearing) face.Â  Racing to the nearest gas station, he dials the number for Dr. Flem’s lab, only to be told to get hom, fast as he can.

The depth of this issue and it’s ruminations on life and death are tough to summarize, honestly, but really interesting in a spiritual sense.Â  The character who was about fun, puns, pop-art references (Mott the Hoople, anyone?) and silliness has evolved into a deep study in philosophy and mortality, and more power to him.Â  I don’t suspect that this kind of thing is for everyone, but Allred’s art has a new subtlety to it, with the artitecture, the vehicles and technology nearing photorealism, while the characters maintain his trademark stylization, while his writing meshes high-falutin’ spiritual talk with down-to-earth real people dialogue nicely.Â  It’s a strong outing for Madman, earning Madman Atomic Comics #11 3 out of 5 stars, and making me once again happy to connect with an old friend now grown-up.